After 800 deaths, months of hearings, 63 witnesses and three high-profile resignations, the 500-page final report from the inquiry into Victoria's botched hotel quarantine program has been released.

Victoria's hotel quarantine inquiry has been unable to identify a single individual responsible for the fatal decision to use private security guards in the program.

The state's second wave of coronavirus, which resulted in more than 18,000 new infections and 800 deaths, can be traced back to security guards working at the Rydges on Swanston and Stamford Plaza hotels in May and June.

In the inquiry's final report, tabled in parliament on Monday, retired judge Jennifer Coate concludes the decision to hire private security guards was "not made by an 'individual'".

Rather, she argues there were people "with influence" who contributed to an "understanding being reached that private security would be used".

"This understanding then became the decision that was adopted and acted upon" during a state control centre meeting on the afternoon of March 27, the day before the quarantine program began. The meeting was chaired by Emergency Management Commissioner Andrew Crisp and attended by Victoria Police officers and public servants.

Prior to the meeting, Ms Coate said the then-police chief commissioner Graham Ashton was consulted and "expressed a preference that private security perform that role and Victoria Police provide the 'back up'".

Mr Ashton's position, relayed by senior police officers at the state control centre meeting, was "clearly persuasive" to others present.

"There being no particular discussion or dissent, this set in motion the actions, that evening, by DJPR (the Department of Jobs, Precincts and Regions) to commence contractual engagement with three security firms," the report reads.

Ms Coate said no consideration was given to using Australian Defence Force Personnel for enforcement at the meeting.

She concluded ADF personnel were most likely available to assist at the quarantine hotels from April 8, though she was not able to say whether their presence would have removed the need for private security guards.

"It seems most likely, having regard to the models adopted in NSW and Queensland, that if the ADF was available it would have only been available in numbers to supplement, rather than replace, the existing security workforce," she wrote.

"Enforcement of quarantine was a crucial element of the program that the premier had committed Victoria to adopting, but neither he nor his ministers had any active role in, or oversight of, the decision about how that enforcement would be achieved," the report reads.

Ms Coate said not one of the 70,000 documents handed to the inquiry "demonstrated a contemporaneous rationale for the decision to use private security as the first tier of enforcement, or an approval of that rationale in the upper levels of government".

"Such a finding is likely to shock the public," the report reads. 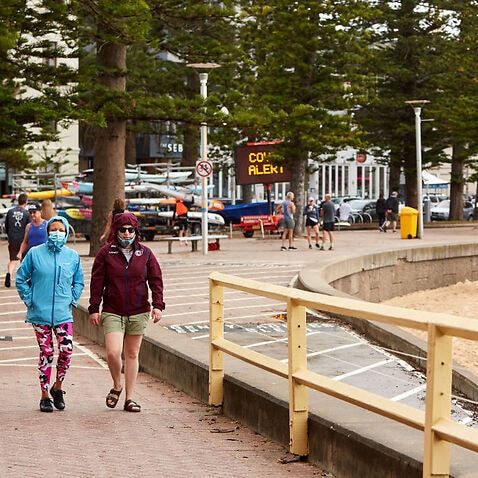 Christmas and New Year's Eve could be 'calamitous' without a Greater Sydney lockdown, experts say

She said the role performed by security guards in the program was "ill-defined from the beginning and was, ultimately, a role not suited, without close monitoring and extensive and continued training, to the cohort of guards that was engaged".

"Consideration was not given to the appropriateness or implications of using a largely casualised workforce in an environment where staff had a high likelihood of being exposed to the highly infectious COVID-19," Ms Coate said in the report.

"This, of course, had flow-on impacts in terms of the spread of the virus."

The report also found the Department of Health and Human Services failed to accept its role as the primary department responsible for running the program.

"This left brewing the disaster that tragically came to be."

Ms Mikakos and two senior public servants have already resigned over the hotel quarantine scandal, while a reset program started earlier this month.

The premier on Monday apologised for the "very clear errors" made in the program.

"If I could turn back the clock and receive daily reports on what happens in hotel quarantine as I do now, then, of course, I would," he said.

"But none of us have the ability to change history. We can only learn those lessons and make sure that the reforms and the changes that are essential are made to make it far less likely that these sorts of errors could ever occur again."

Mr Andrews said the government intended to accept all the recommendations made in the report, after further consideration throughout the summer.

"My commitment is to not only apologise - apologies are very important, particularly when you mean it - but to also offer my commitment to make sure that we do everything we possibly can to learn these lessons," he said.

But many Victorians are still reeling from the devastation of the state's second wave.

Spiros Vasilakis is bracing for a first Christmas without his mother, Maria, who died at an aged care home during the outbreak.

He said he is among a number of Victorians “dumbfounded” the report did not pinpoint an individual responsible for the decision to use private security guards. "[Thousands of] documents and all the interviews involved - and not one shred of evidence of who made that decision?"

Monday marked 52 days without a single case of local transmission in Victoria.

Mr Vasilakis said he welcomed the apology from the premier but also wants to see more accountability.

"To me, it seems like whatever brought on this second wave on is all irrelevant," she said.

"And all that is relevant is we're at 52 days [without local cases]. While we are grateful for that, that does not take away from the pain."

In a statement on Monday evening, Ms Mikakos said she also thought the review left many questions unanswered.

“The Coate inquiry has failed to answer key questions. I believe Victorians deserve to know the truth about an event that has so profoundly impacted them,” she said.

“They do not need another masterclass in political deflection from the Premier.”