Premier Daniel Andrews has slammed the "small, ugly mob" who continue to gather outside the Victorian parliament to protest against proposed pandemic laws. 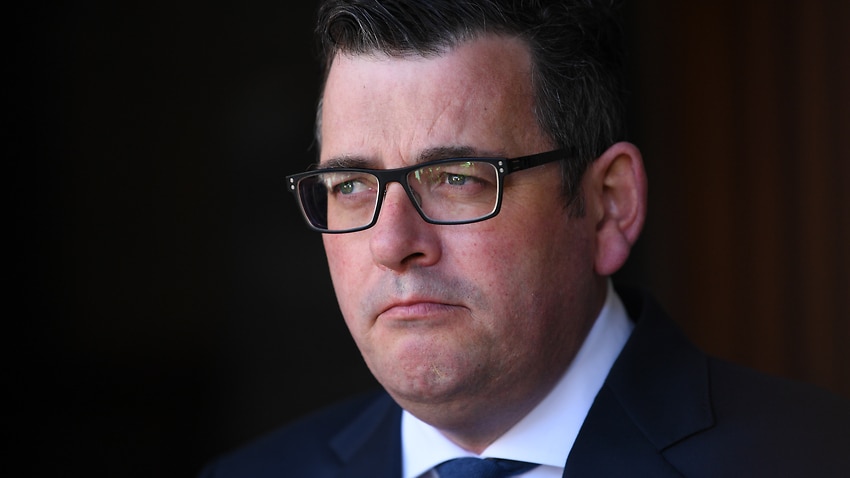 "I'll not be deterred from the work I'm doing to keep every family safe," Mr Andrews told reporters. Source: AAP

Debate on the Public Health and Wellbeing Amendment (Pandemic Management) Bill began in the upper house on Tuesday afternoon and went well into the night.

The bill has become a lightning rod for anti-lockdown and anti-vaccination groups, with hundreds of protesters planning to camp out on the steps of parliament for the duration of the debate.

A video posted on social media shows the protesters gathered around a wooden gallows chanting "Freedom", "Traitor", "Kill Dan Andrews" and "Hang Dan Andrews" while attempting to place the head of an inflatable doll of the premier through the noose.

"I'll not be deterred from the work I'm doing to keep every family safe," Mr Andrews told reporters on Wednesday.

"I wouldn't want the appalling, the disgusting and the potentially criminal behaviour of a small number of people to detract away from the amazing job that so many Victorians have done.

"It is so unfair for a small, ugly mob to be taking attention away from the more than 90 per cent of Victorians who have had a first dose and will soon have had a second dose."

Daniel Andrews responds to threats made from protesters

Debate to resume on Thursday

Debate on the bill is on hold as the chamber deals with non-government business, but it is expected to resume on Thursday.

The laws would give the premier and health minister the power to declare a pandemic and make public health orders, and is all but guaranteed to pass after the government made amendments to secure the support of three crossbench MPs.

The amendments to the legislation will clarify that the premier will need "reasonable grounds" to declare a pandemic and that the application of orders based on characteristics "must be relevant to the public health risk".

Maximum fines for people who breach public health orders have been halved.

The proposed legislation will also require the health minister to confirm the role the state's Charter of Human Rights and Responsibilities has played in any decisions.

The advice behind any orders issued must be made public within a week rather than a fortnight, while the parliament's Scrutiny of Acts and Regulations Committee will be given the power to consider any order when it is made, instead of after it is tabled.

"The new pandemic laws will provide a clear framework for managing pandemics such as COVID-19 - while putting the safety of all Victorians first," he said in a statement.

The government is relying on the support of Animal Justice Party MP Andy Meddick, Reason Party MP Fiona Patten and Victorian Greens leader Samantha Ratnam to pass the bill in the Legislative Council.