The two presumptive candidates for the US presidency, Hillary Clinton and Donald Trump, have become embroiled in their first Twitter fight and the internet loves it.

It took Hillary Clinton just one tweet to shut down Donald Trump, start a Twitter flame war and nearly break the internet.

Trump started it, mocking US President Barack Obama's endorsement of the presumptive Democratic nominee on Thursday.

Obama just endorsed Crooked Hillary. He wants four more years of Obama—but nobody else does!

Mrs Clinton, the presumptive Democratic presidential nominee, then employed a time-honoured Twitter insult to slam Mr Trump after he claimed her presidency would be "four more years of Obama".

"Delete your account," her campaign tweeted and the social media platform exploded.

Delete your account is a typical joking insult used on the social media platform, often deployed when someone has failed to be funny or has tweeted something that has missed the mark.

It quickly became the most retweeted tweet of her election campaign and saw her supporters singing her praises.

@HillaryClinton YOURE MY GIRL HILL DAWG, I LOVE YOU

But the tweet also prompted its fair share of haters, many of whom referred to the 32,000 emails Mrs Clinton has admitted she deleted from the private email account she used while she was Secretary of State.

When Mrs Clinton announced in March 2015 that she had turned more than 55,000 pages of emails to the State Department for public release, she also she said she "chose not to keep my private, personal emails".

The deletion of the emails from her private server did not completely wipe out all remaining records. The FBI reported to court filing on Monday that data retrieved from the server is being treated as evidence in the agency's probe of Mrs Clinton's server.

.@HillaryClinton @realDonaldTrump Like you deleted those emails, Hill? #NotWithHer

@HillaryClinton @realDonaldTrump um yea, and delete those EMAILS!!! (especially the classified ones) pic.twitter.com/4dVOOL0tnB

@HillaryClinton @realDonaldTrump how childish and immature of you. Delete ur own account Hillary just like u deleted your emails and lied.

Twitter users also threw some shade at Mr Trump for taking two hours to retaliate when it took Mrs Clinton just five minutes to slap him down.

How long did it take your staff of 823 people to think that up--and where are your 33,000 emails that you deleted? https://t.co/gECLNtQizQ

.@realDonaldTrump You replied two hours after her tweet. She replied five minutes after yours.

Both presidential hopefuls are the presumptive candidates for their respective parties but are yet to be formally confirmed.

Once they are officially named the Democratic and Republican presidential candidates the campaign will begin in the lead up to the November election. 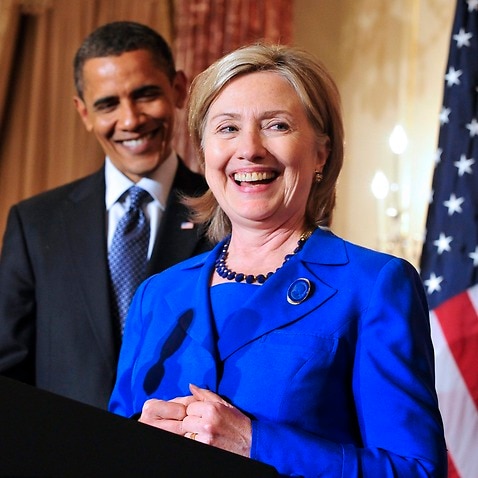 'I'm with her': Obama endorses Clinton for president