Deliveroo is under fire for mistreating its workers after it lost an undisclosed number of its riders' contracts and threatened to suspend others from work.

Food delivery operator Deliveroo is the latest company accused of mistreating workers as the retail workers' union launches a campaign to get young people talking about their rights at work. Deliveroo is threatening to terminate the employment of some of its delivery riders after misplacing their contracts, the ABC reports. The company is asking delivery riders to either sign new contracts or to find and produce their old agreements before Friday (July 20).

SBS News has reached out to Deliveroo for comment.

It comes a day after cosmetics company Lush admitted it may have underpaid up to 5000 former and current staff as much as $2 million, and as Foodora - one of Deliveroo’s competitors - defends lawsuits alleging worker exploitation.

Greg Bamber, a professor at Monash University’s Business school and co-Director at the Australian Consortium for Research in Employment and Work, is urging employers to keep a closer eye on their employment arrangements.

“Some employers used to have their own pay clerks, familiar with Australian law and personally knew the people within the company,” Mr Bamber told SBS News.

“But now, some employers have outsourced their payroll to cut costs, sometimes to another country, where workers don’t have the same knowledge.

“Employers must pay better attention to how they pay workers.” Deliveroo is under fire.
NurPhoto

Young Australians are particularly at risk of being exploited at work.

But the union for workers in retail and fast food hopes to change that, launching a new recruitment drive over social media to encourage young people to talk about their rights. The Shop, Distributive and Allied Employees Association (SDA) is using social media platforms such as Snapchat, Instagram and Facebook to encourage young people to learn more about fair working conditions.

The SDA said the campaign is in response to research which found young workers had very limited knowledge of their rights.

“It’s not an easy thing as a young worker to challenge the employer to say, ‘where is my payslip’? ‘What’s going on here?’"

“In addition to providing straightforward information we also wanted to reach young workers where they currently are, and that’s on [social media]”.

The SDA has also developed a young worker hub called 100% Pay to provide “simple and clear information about basic rights at work".

There, concerned parties can take a quiz to help them discern whether they are being mistreated at their workplace. People can take quiz at the 100% Pay portal to help them discern whether they are being mistreated.
SDA

According to a report released by Unions ACT last year, more than three-quarters of people surveyed aged 15 to 25 said they had been underpaid.

The Fair Work Commission's controversial decision to cut Sunday penalty rates came into effect at the start of this month, leaving many young Australians even more concerned about the size of their pay.

“Migrants, foreign students and people who don’t have English as their first language often don’t feel comfortable to put their hand up to call out underpayment,” he said.

The Migrant Worker Justice Initiative’s (MWJI) Wage Theft in Australia report published last year, which surveyed over 4,300 international students and backpackers, found 43 per cent were paid $15 per hour or less.

At least three-quarters of those surveyed said they knew they were being paid less than the minimum wage. 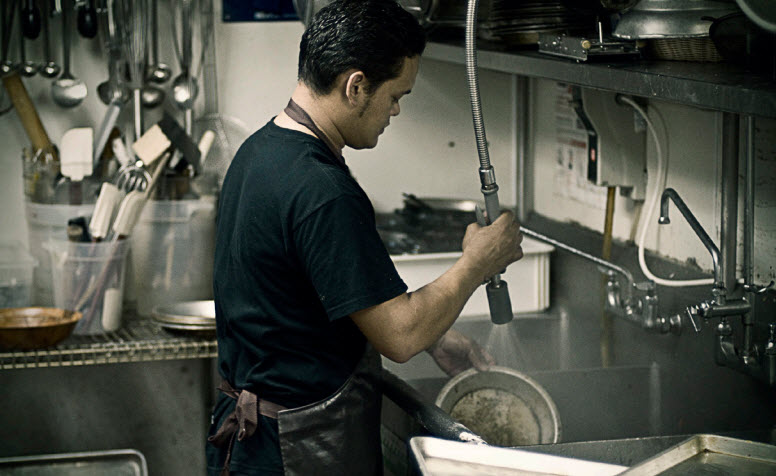 The Wage Theft in Australia report found 43 per cent of migrants and temporary Australians were paid $15 per hour or less.
Supplied

They said one reason they remained on the job was because they thought others on similar visas were also earning below the minimum wage.

The MWJI report also found underpayment was widespread across numerous industries but was especially common in food services.

Mr Bamber suggested migrants and foreign students confused about their rights under Australian law to turn to the Fair Work Ombusman for help.

“They can provide materials that are translated into other languages,” he said.

The MWJI estimates temporary migrants comprise around 11 per cent of the Australian labour market.