Five women from a remote arts centre in Arnhem Land are “feeling proud” to be in Paris for an exhibition of their work, despite losing one of their members on the eve of the trip.

Janet Marawarr had never been overseas, until now.

The Kuninjku speaker from the remote Mumeka region of Arnehm Land has spent the past two weeks walking around Paris, taking in the sights, smells and tastes of the French capital. 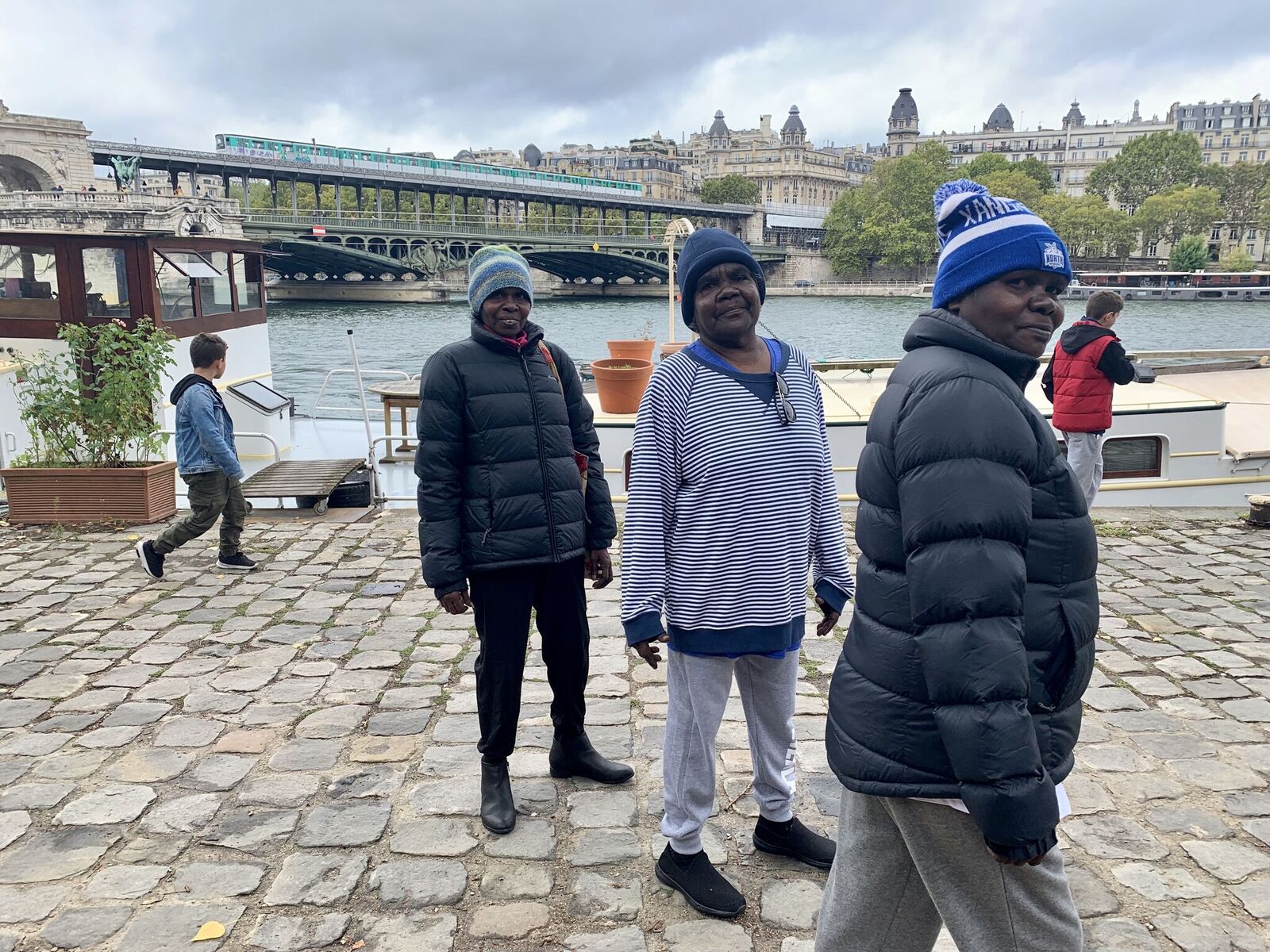 “It is the most big city I have seen. It is the first time I am here and [am] feeling proud,” she told SBS News.

Ms Marawarr is one of five Aboriginal artists from the Babbarra Women's Centre - a design studio in the remote Arnhem Land community of Maningrida - who has travelled to Paris for an exhibition of their work. 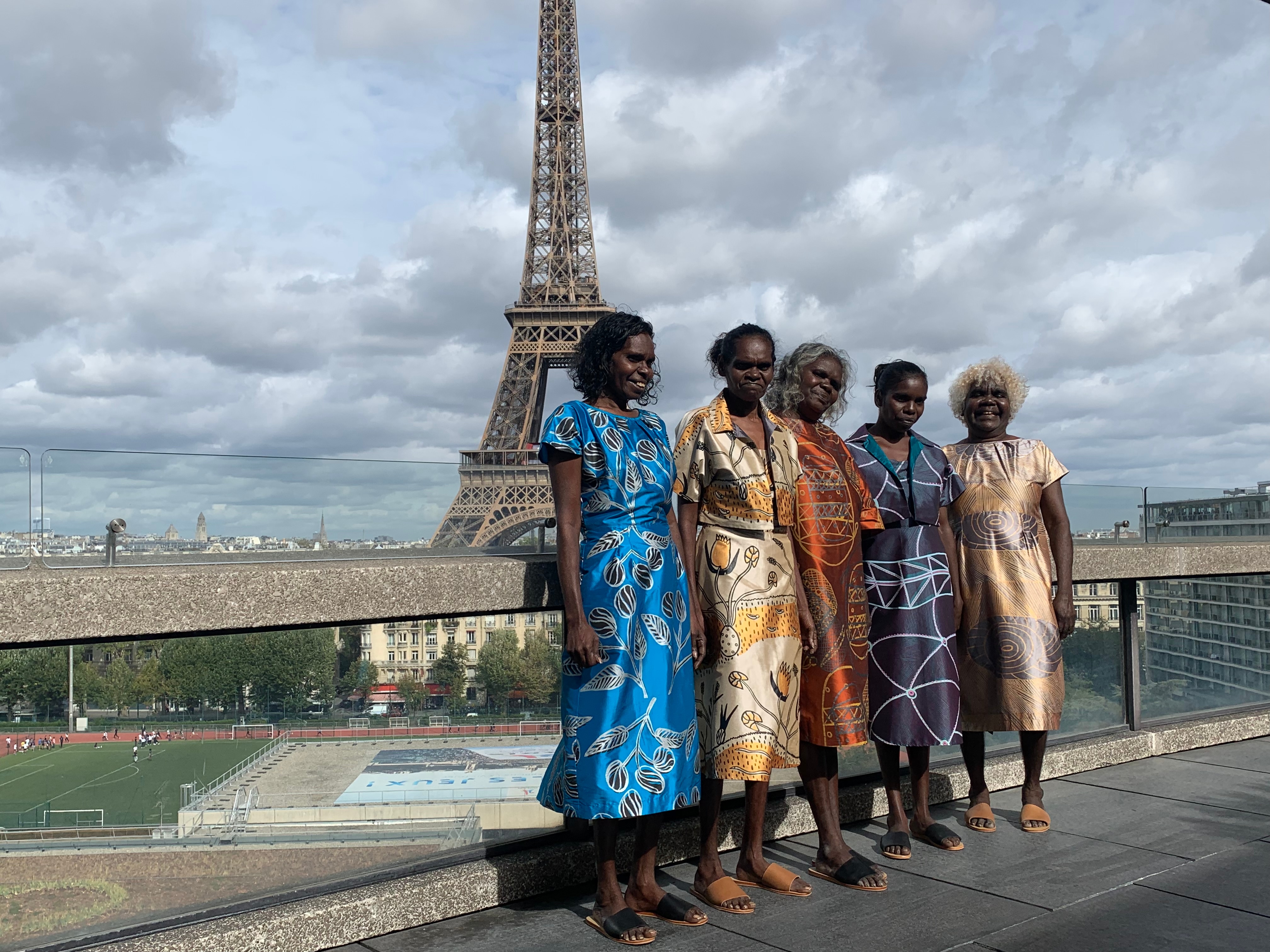 The exhibition, named Jarracharra after the cold wind which signals the beginning of the dry season in Arnhem Land, celebrates the women's roles as story keepers and the mixture of cultures at Babbarra.

“We have been walking a lot, looking at all the men and women,” Ms Marawarr said.

“We have been eating big mob food – there is really tasty food here in Paris.”

The travelling artists, none of whom had been overseas before the trip, have also been involved in panel discussions, spoken to international media and run workshops on Indigenous art for children. 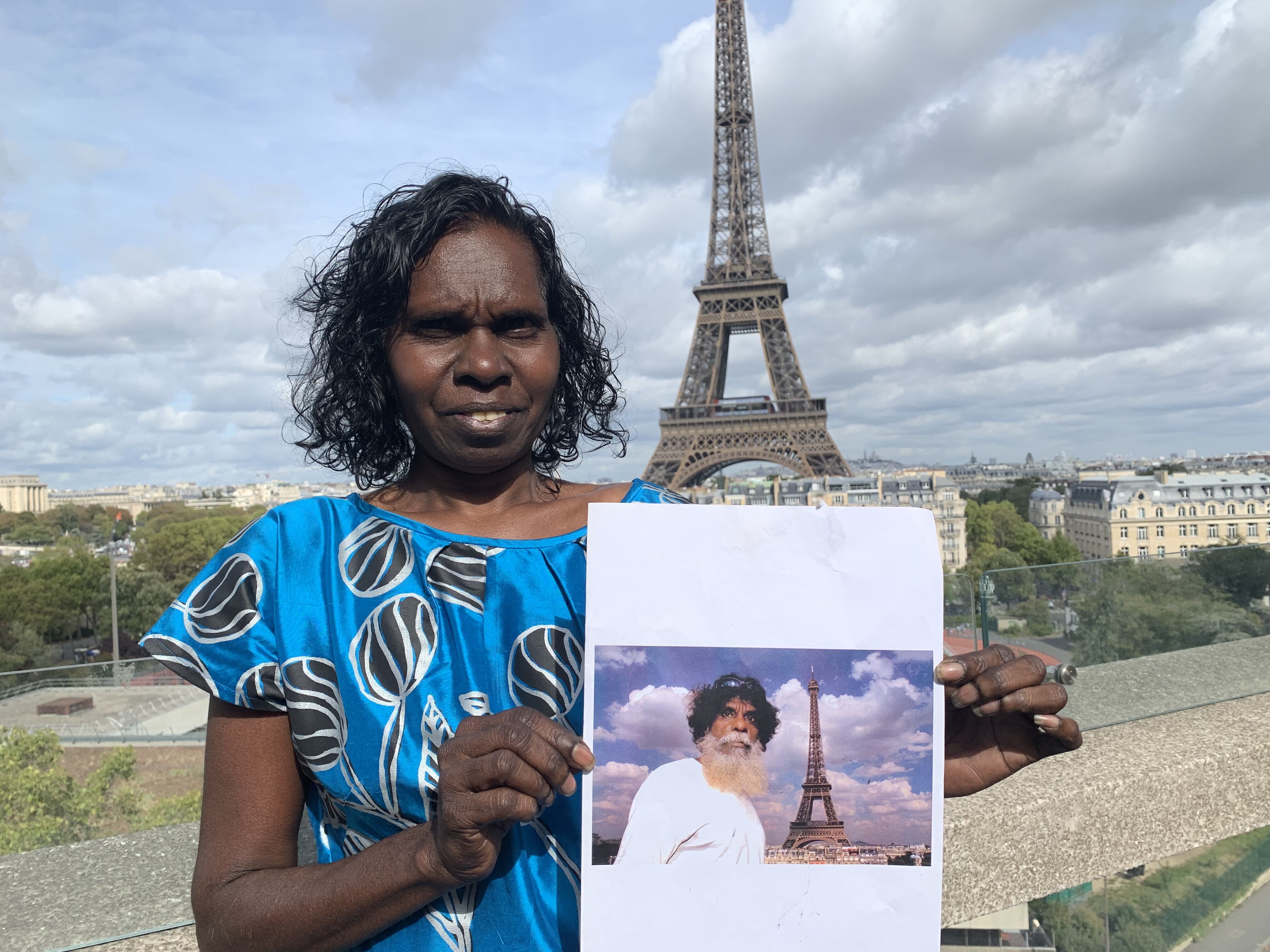 Deborah Wurrkidj with the image of her uncle John Mawurndjul, taken in the exact same place in 2005.
Ingrid Johanson/Babbarra Women’s Centre

“It has been incredible to see the ladies experience a different place,” Babbarra manger and Jarracharra co-curator Ingrid Johanson said.

“Paris is so far from Maningrida, and so culturally different to Maningrida. None of us will ever forget this experience – it has been once in a lifetime.”

SBS News spoke to Babbarra artists and staff in June about the exhibition and the troubles some of the women had obtaining passports.

Just weeks later, one of the artists unexpectedly passed away due to health complications, aged 37.

“We were so sad,” Ms Marawarr said.

“It was very sudden. We loved her.”

The centre was closed for two weeks, but the trip and exhibition went ahead.

The five artists danced at the exhibition opening on 3 October along with Jarracharra co-curator Jess Phillips, a Burarra woman. Australia’s Ambassador to France, Brendan Berne, and representatives from the Department of Foreign Affairs and Trade and Vogue Australia were among those in attendance on opening night.

“The women were all so proud to have so many people at their opening in France,” Ms Johanson said. Ms Johanson said the group will make the most of their remaining time in the French capital before making the 14,000km trip back to Maningrida later this week.

“The ladies have a lot of creative energy at the moment - Janet has even been playing with drawing an Eiffel Tower design,” she said. 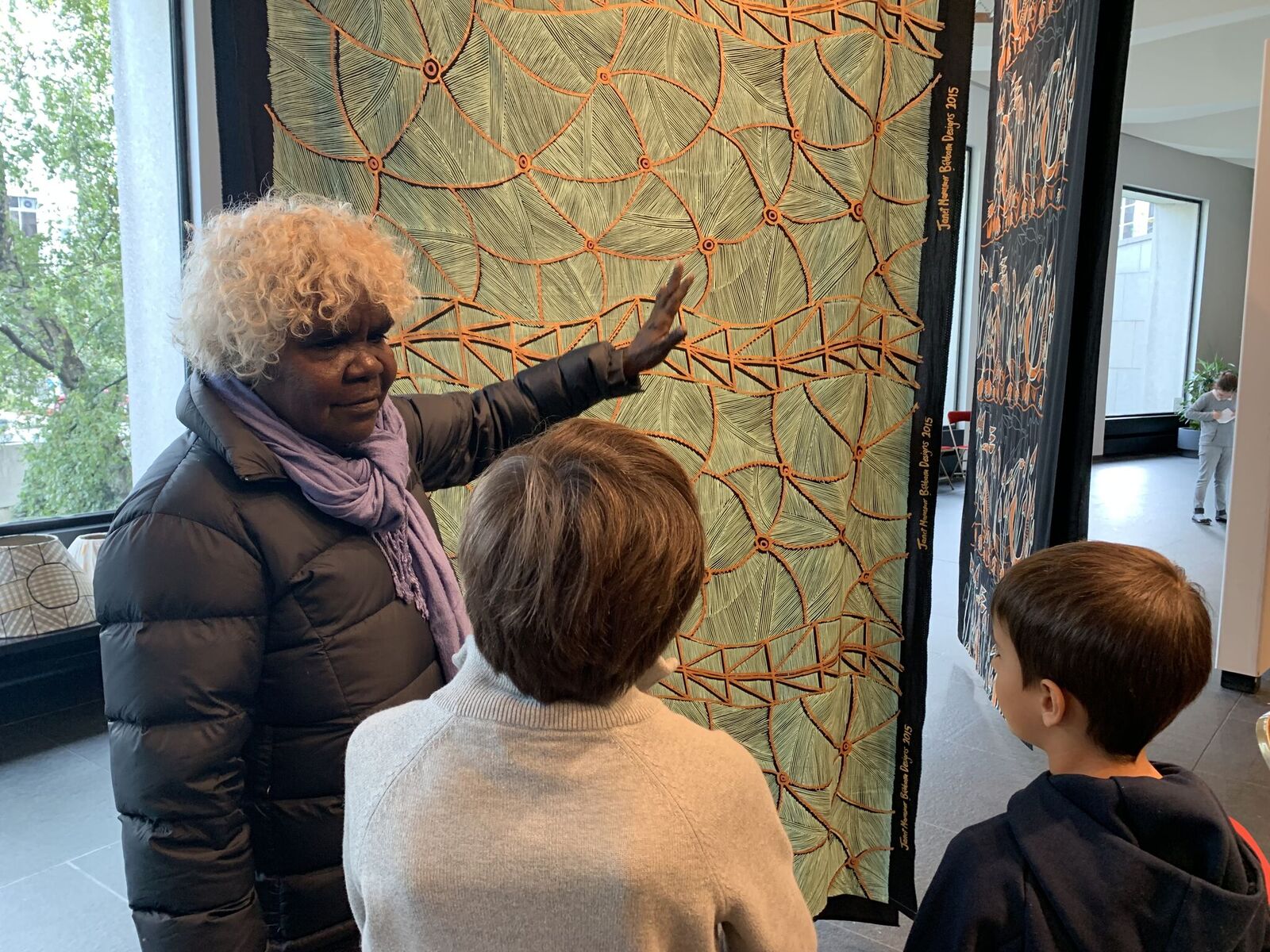 Last week the group made a visit to the Musée du Quai Branly, France’s internationally-renowned museum with an extensive collection of Indigenous art from around the world, including works from Maningrida.

Bark painter John Mawurndjul - an uncle of travelling Babbarra artist Deborah Wurrkidj - has various works on display there, including a large painting fixed onto a ceiling. 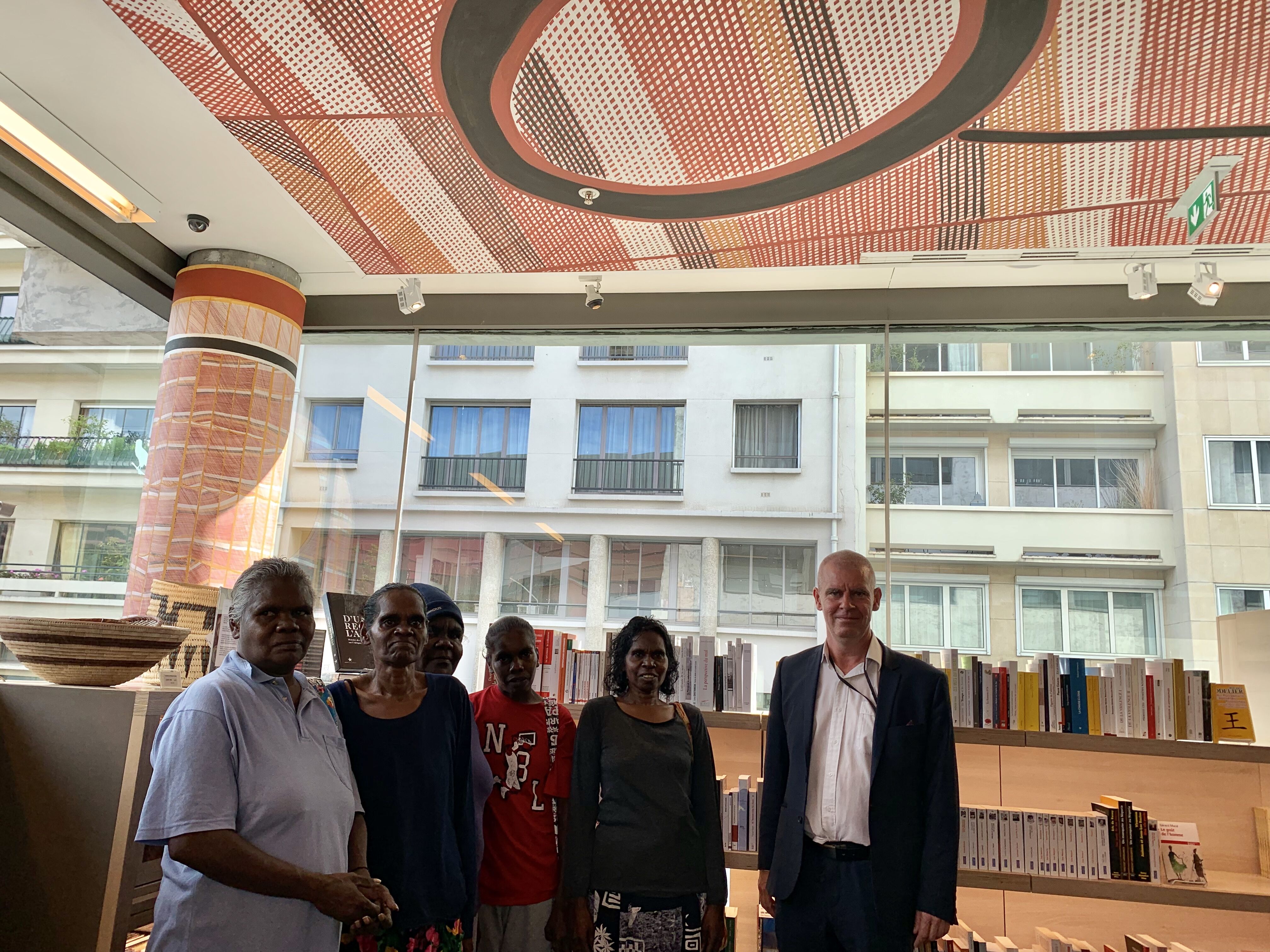 The Babbarra women stand below a ceiling painted by John Mawurndjul at the Musée du Quai Branly.

“We will tell our families that we saw the Maningrida bark in Paris,” Ms Marawarr said.

“They will be happy, and Johnny will be excited to see our photo with that painting in Paris.”

Jarracharra runs at the Australian embassy in Paris until January 2020.