A West Australian team of biomedical engineers, surgeons and scientists are hopeful they can grow bone to replace missing pieces of a human skull using a 3D printer, bioceramics and stem cells.

Patients who have lost part of their skull from trauma or surgery could regrow their own bone using stem cells, according to biomedical engineers at Royal Perth Hospital.

Dr Alan Kop and his colleagues believe that using stem cells on a 3D-printed bioceramic insert will act as a scaffold and help the body grow skull bone in its place.

“We’re helping the process by putting stem cells on to the ceramic which will signal to the patient’s own bone that they need to lay bone down there in the defect,” he said.

Dr Kop said the bioceramic was made from similar material to bone such as calcium phosphate so it would be harmlessly resorbed by the body.

“We’re also following international studies and what other people have done as well so we know that we’re not doing something completely outrageous,” he said.

“We’re following literature and other people’s leads in the area.”

But the RPH team believes it is the first to use stem cells to encourage bone to eventually replace the strong, but brittle bioceramic.

Titanium has also been used, but Dr Kop said it would eventually need to be replaced and could be a source of infection.

He said 3D printing and other technological advancements had made creating the skull inserts possible.

“The precision is really important and to date people have made these ceramics like they do traditionally, like they have done for hundreds of years,” Dr Kop said. “Just recently the company that we’re working with in Vienna has been able to make ceramics super accurately, so less than 100 microns tolerance, and that allows us to print exactly the shape that we want for the patient.”

Three-dimensional printing is also carried out at Royal Perth Hospital to create plastic models that surgeons use to familiarise themselves with a patient.

Dr David Morrison uses CT scans of patients to create the models as well as the missing pieces of skull that are made in Vienna and then combined with the model in Perth.

“Obviously they are very good at interpreting CT data and x-rays and things like that, but if you hand them a model of a patient’s anatomy they go ‘Ah, it’s very easy to see what’s going on here,’ and they very much like that experience.

“And the great thing about the models that we make here is that they are sterilisable so they can be taken into theatre so the surgeon can go from working on the patient to looking at the model and back and forth between the two.”

Dr Morrison said the advancements in CT scanning, 3D printing and computing were saving time and money as well as helping patients.

“It’s amazing how far the technology has come from tracing out the slices of CTs, and tracing them out in Perspex and joining them together to make a model to going to a milling process where the implant is milled out of a solid block to going to a 3D-printed process," he said. 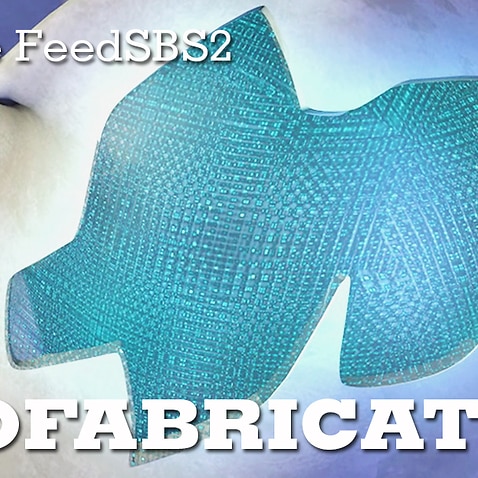 “It’s much easier and faster and the great thing about having them in the hospital is we can get a very quick turnaround.

“The surgeon can request something and it can be ready for them to see and touch the next day.”

As for growing bone through a bioceramic scaffold, the team said it would take years to prove it was successful, but they were hopeful it could lead to building more complicated bone structures like jaws and long bones.

A trial will start with human patients next year.