Israeli forces killed dozens of Palestinians on the Gaza border in the conflict's bloodiest day in years on Monday as clashes and protests coincided with the deeply controversial opening of the US embassy in Jerusalem.

Israeli troops shot dead dozens of Palestinian protesters on the Gaza border on Monday when the high-profile opening of the US embassy to Israel in Jerusalem by the Trump administration raised tension to boiling point after weeks of demonstrations.

In the bloodiest single day for Palestinians since 2014, Palestinian Health Ministry officials said 58 protesters were killed and 2,700 injured by live gunfire, tear gas or other means.

The bloodshed drew calls for restraint from some countries, including France and Britain, and stronger criticism from others, with regional power Turkey calling it “a massacre”. Israeli troops fire tear-gas at Palestinian protesters during clashes after protests near the border with Israel in the east of Jabaliya.
AAP

The White House declined to join in urging Israel to exercise caution and pinned the blame squarely on Gaza’s ruling Hamas group, backing Prime Minister Benjamin Netanyahu who described the Israeli military’s actions as self-defence of his country’s borders.

In siding squarely with Israel, Washington put distance between itself and its European allies for the second time in a week, after angering France, Germany and others last Tuesday by abandoning an international nuclear deal with Iran.

In contrast to the violent scenes in Gaza, Israeli dignitaries and guests attended a ceremony in Jerusalem to open the US Embassy following its relocation from Tel Aviv.

The move fulfilled a pledge by US President Donald Trump, who in December recognised the holy city as the Israeli capital.

Netanyahu thanked Trump for “having the courage to keep your promises”.

US Senator Tim Kaine, the top Democrat on the foreign relations subcommittee that covers the region, told Reuters the situation was “tragic” and said “It’s not viewed as the US trying to solve a problem, it’s viewed as the US just stepping away from the problem, and that’s sad.” 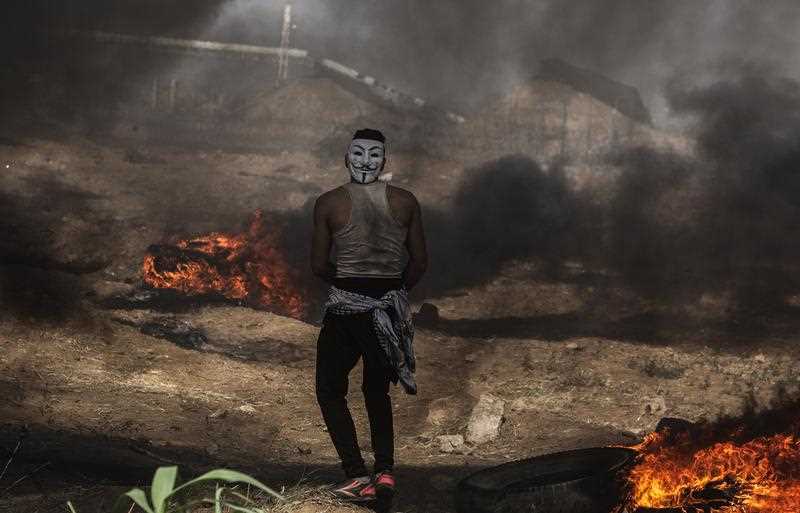 A Palestinian protester takes part in clashes after protests near the border with Israel in the east of Gaza Strip, 14 May 2018.
AAP

Palestinians seek East Jerusalem as the capital of a state they hope to establish in the occupied West Bank and the Gaza Strip.

Israel regards all of the city, including the eastern sector it captured in the 1967 Middle East war and annexed in a move that is not recognised internationally, as its “eternal and indivisible capital”.

Most countries say the status of Jerusalem - a sacred city to Jews, Muslims and Christians - should be determined in a final peace settlement and that moving their embassies now would prejudge any such deal.

Peace talks aimed a finding a two-state solution to the conflict have been frozen since 2014. Trump’s recognition of Jerusalem as Israel’s capital in December outraged Palestinians, who said the United States could no longer serve as an honest broker in any peace process.

A senior Hamas leader, Khalil Al-Hayya, said at a border encampment that Monday’s protest was timed to coincide with the “deplorable crime of moving the US Embassy to Jerusalem”.

He said: “Our people went out today to respond to this new Zionist-American aggression, and to draw by their blood the map of their return.”

In Gaza, Palestinian protests quickly turned into bloodshed. Tens of thousands had streamed to the edge of the coastal enclave’s land border, some approaching the Israeli fence.

“Today is the big day when we will cross the fence and tell Israel and the world we will not accept being occupied forever,” said Gaza science teacher Ali, who declined to give his last name.

Clouds of black smoke from tyres set alight by demonstrators rose in the air. Demonstrators, some armed with slingshots, hurled stones at the Israeli security forces, who fired volleys of tear gas and intense rounds of gunfire.

The protests, which have been going on for weeks, are scheduled to culminate on Tuesday, the day Palestinians mourn as the “Nakba” or “Catastrophe” when, in 1948, hundreds of thousands of them were driven out of their homes or fled the fighting around Israel’s creation. 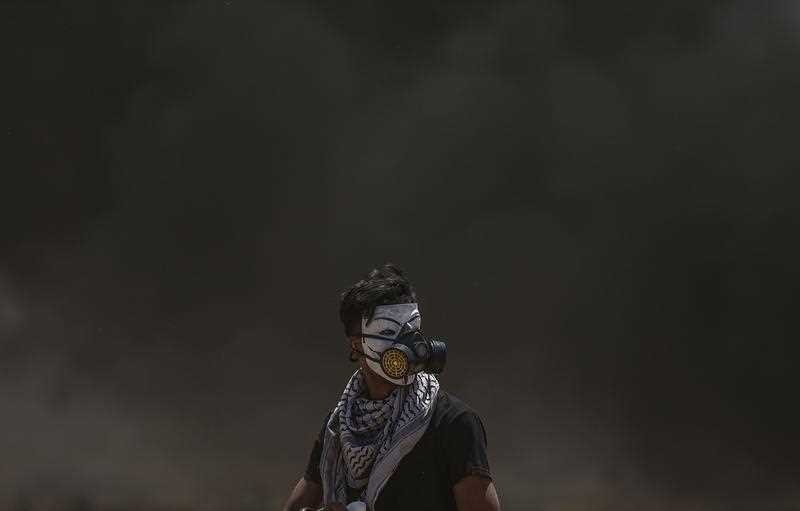 A Palestinian protester during clashes after protests near the border with Israel in the east of Jabaliya in the northern Gaza Strip, 14 May 2018.

“Every country has an obligation to defend its borders,” he wrote on Twitter. “The Hamas terrorist organisation declares it intends to destroy Israel and sends thousands to breach the border fence in order to achieve this goal. We will continue to act with determination to protect our sovereignty and citizens.”

In a small protest outside the White House, some protesters chanted “Palestine will be free”.

The Israeli military said in a statement: “Rioters hurled firebombs and explosive devices at the security fence and Israeli troops”. The soldiers’ response, it said, was in accordance with “standard operating procedures”.

The dead included at least six people under 18 years of age, including one girl. The total number of fatalities since a series of protests to demand Palestinians’ right to return to their ancestral homes in Israel is now 103.

They also included a medic and a man in a wheelchair who had been pictured on social media using a slingshot. The Israeli military said three of those killed were armed militants who tried to place explosives near the fence.

Sirens of ambulances carrying casualties to hospitals wailed almost non-stop all day. In Gaza mosques, loudspeakers mourned the dead, who were carried for burial in funeral marches.

Israel said it would reopen the Kerem Shalom goods crossing, which provides vital supplies for the enclave, from Tuesday. It was shut after Gaza protesters vandalised it on Friday night when they set fire to a gas pipeline and a goods conveyor.

Trump, in a recorded message, said he remained committed to peace between Israel and the Palestinians. He was represented at the ceremony by his daughter Ivanka and his son-in-law Jared Kushner, US envoy to the Middle East.

Thank you Prime Minister @netanyahu & Mrs. Netanyahu for the warm welcome to Israel. I am honored to join you & the US Delegation in commemorating the dedication of our new @usembassyjlm & celebrating the friendship between our two countries. #USEmbassyJerusalem 🇺🇸 🇮🇱 pic.twitter.com/DY4z9sXnnS

Kushner said it was possible for both sides in the conflict to gain more than give in any peace deal. “Jerusalem must remain a city that brings people of all faiths together,” he said in a speech.

But Palestinian President Mahmoud Abbas said the United States had opened an “American settlement outpost in East Jerusalem”. He announced a general strike on Tuesday.

Unlike the previous administration of former president Barack Obama which had a strained relationship with Netanyahu, Trump has firmly supported the Israeli leader.

Netanyahu has long been a critic of the nuclear deal with Iran, which Trump abandoned last week despite complaints from other US allies.

The Pentagon confirmed it had deployed additional US Marine guards to temporarily bolster security at several US embassies after the violence but declined to say which ones. A US official, speaking on condition of anonymity, confirmed the deployments bolstered security at US embassies including Israel, Jordan and Turkey.

French President Emmanuel Macron said he plans to talk to all involved parties in the region over the next few days.

Britain said it had no plans to move its Israel embassy from Tel Aviv to Jerusalem and disagreed with the US decision to do so. French Foreign Minister Jean-Yves Le Drian said the US move flouted international law.

Turkey accused Israeli security forces of carrying out a massacre and said the US embassy move had encouraged them.

The United States on Monday blocked a Kuwait-drafted U.N. Security Council statement that would have expressed “outrage and sorrow at the killing of Palestinian civilians” and called for an independent and transparent investigation, U.N. diplomats said.

More than 2 million people are crammed into the narrow Gaza strip, which is blockaded by Egypt and Israel.

The Trump administration says it has nearly completed a new Israeli-Palestinian peace plan but is undecided on how and when to roll it out.

"Any loss of life is tragic in these circumstances," Mr Turnbull told 3AW radio on Tuesday.

Mr Turnbull confirmed there were no plans to follow the US's lead and move Australia's embassy to Jerusalem from Tel Aviv.

Foreign Minister Julie Bishop expressed deep regret and sadness over the loss of life and injury.

"We recognise that Israel has legitimate security concerns and needs to protect its population, and we call on Israel to be proportionate in its response and refrain from excessive use of force," Ms Bishop said in a statement.

"Australia urges Palestinian protesters to refrain from violence and attempting to enter into Israeli territory during the March of Return."

Ms Bishop said the violence underlines the importance of a return to negotiations toward a two-state solution and peace.