The Sydney Opera House is one of 24 global landmarks turning off its lights to mark Earth Hour.

Global landmarks from the Sydney Opera House to Dubai's Burj Khalifa are dimming their lights to raise awareness about energy use and our planet's vanishing biodiversity.

The thirteenth edition of Earth Hour, organised by the green group WWF, will see 24 landmarks each go dark for 60 minutes throughout the day.

"We are the first generation to know we are destroying the world. And we could be the last that can do anything about it," the charity said.

The Sydney Opera House is turning off the lights for #EarthHour. pic.twitter.com/Rbc1585OlR

"We have the solutions, we just need our voices to be heard."

Dozens of companies around the world have said they will join in this year's switch-off.

Annnnnnd it is finally @earthhour in Sydney! How will you #connect2earth? We're thinking about the health of our oceans... #SustainabilitySaturday #EarthHour pic.twitter.com/vVo8rvY1Yh

The event comes after some of the most dire warnings yet on the state of Earth's natural habitat and species.

WWF's own "Living Planet" report in October said that 60 percent of all animals with a backbone -- fish, birds, amphibians, reptiles and mammals -- had been wiped out by human activity since 1970. 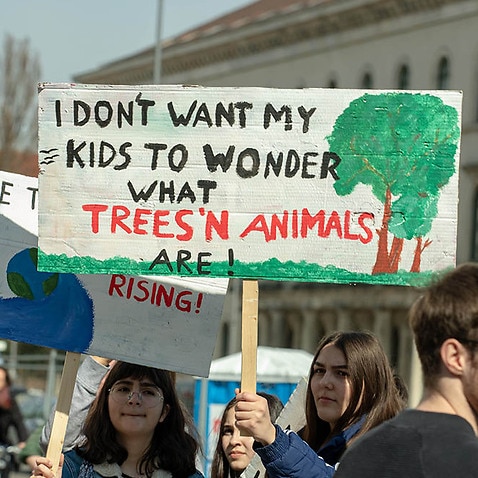 Another dataset confirmed the depth of an unfolding mass extinction event, only the sixth in the last half-billion years.

Let’s build a cleaner, safer and greener future for everyone! This #EarthHour on Saturday March 30th, join @UN & @antonioguterres, and show support for ambitious #climateaction by turning off your lights at 8:30 p.m. local time. More info: https://t.co/2OHgQTttiA #Connect2Earth pic.twitter.com/fsTnIsridg

Paris's Eiffel Tower, New York's Empire State Building and the Acropolis in Athens will all take part in Earth Hour.

Last year's event was observed in more than 7,000 towns and cities in 187 countries, according to organisers.

On social media, people posted messages about how they marked the event.

I fully support 🌎 hr by not watching corny shows on tv programs during its duration n putting off some lights in our abode.#EarthHour#Connect2Earth #ALDENFanArtsFest

Here in Serengeti the lights are always off pic.twitter.com/1VcuYvsgot

Simple actions such as turning off the lights can help improve our #environment and tackle #ClimateChange. Tonight at 8:30pm, people around the world will be turning off their lights for #EarthHour. pic.twitter.com/J1Y2ULhq4U