NSW fire authorities have warned they'll prioritise lives over homes over the weekend while an eighth fatality has been confirmed as the housing toll grows.

Fire authorities in NSW say they'll prioritise lives over homes as severe and extreme conditions again loom over the state.

An eighth person since Monday evening has been confirmed dead after police found a missing 72-year-old man's body by a Belowra road.

The unidentified man's death follows the deaths of six other civilians since New Year's Eve and that of 28-year-old volunteer firefighter Samuel McPaul, who died on Monday in a truck crash near the NSW-Victoria border.

Almost 450 homes were destroyed on New Year's Eve, authorities confirmed on Friday, with the number destroyed over the bushfire season now reaching 1365.

Another 100 facilities and 2,339 outbuildings have been razed.

NSW faces a two-day total fire ban from Friday, the third seven-day state of emergency in as many months and demands for those across the state's South Coast and Snowy Valleys to evacuate immediately. 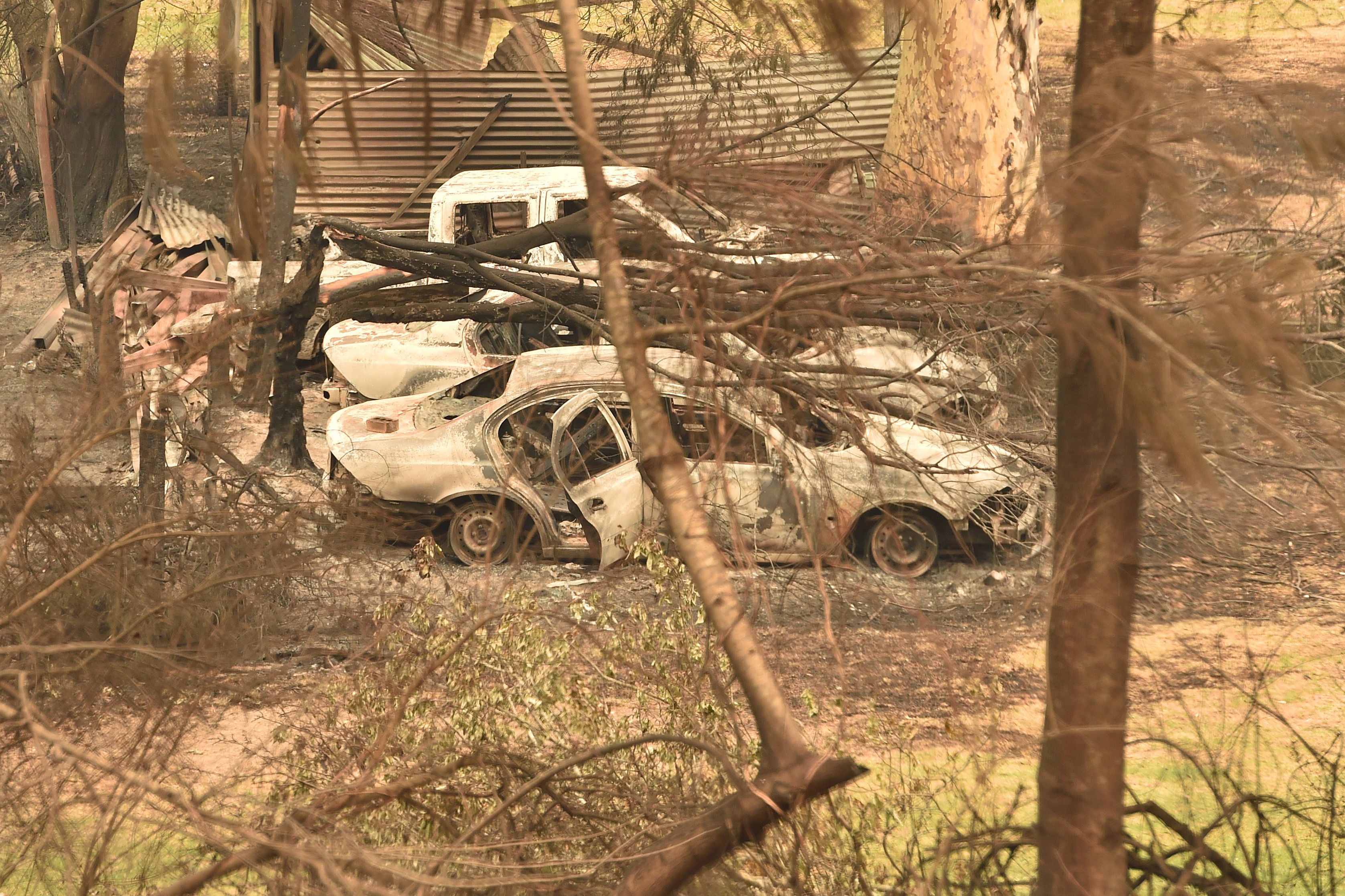 Cars destroyed by bushfires in Mogo near Batemans Bay.
Getty

All people in the 1300-strong town of Batlow were ordered to leave by Thursday night, with the 130,000-hectare Dunns Road fire expected to hit on Friday. A similar message was issued for Khancoban, Greg Greg and Tooma.

The Kosciuszko National Park was also closed on Friday.

Holiday-makers in the alps and popular holiday destinations between Nowra and the Victorian border were asked to be out by Friday night, causing massive traffic queues and petrol and supply shortages.

People lining again this morning before the Moruya Woolworths opened. They don’t have ice or milk but have got some bread in.

Staff are stretched and affected by fires themselves but doing a great job @abcnews @ABCemergency pic.twitter.com/bo0DzGqyBc

Police overnight were escorting 100 cars at a time on the Princes Highway from Milton to Nowra, with one convoy halted midway due to dangerous trees.

The highway on Friday morning had reopened northbound from Milton.

Escorts were also needed to get fuel to dry petrol stations in Moruya, a town cut off on multiple fronts including its access to Batemans Bay to the north.

Emergency services were due to escort petrol tankers into the town on Thursday night after stations there and in Ulladulla and Corryong ran dry and certain fuels were exhausted at sites in Merimbula. The remains of a house destroyed by a bushfire outside Batemans Bay.
AAP

Very high fire danger is forecast on Friday for districts on or immediately west of the Great Dividing Range, while Saturday is expected to be severe or extreme across most of the state's southeast.

Rural Fire Service deputy commissioner Rob Rogers on Friday implored tourists to leave on Friday and residents to get out of the path of fire.

"Go to a major centre away from those potential impact areas - it might be a large town, the beach, an area that has already been burnt, just don't be there. We have seen how devastating the fires can be," Mr Rogers told reporters.

When Brueghel meets the anthropocene. Extraordinary photo by Alex Coppel of bushfire evacuees on the beach at the usually sleepy Malua Bay. pic.twitter.com/4xEdTuOXz0

"We don't want to see anybody else killed in these fires, our pure focus for tomorrow is about the preservation of life."

NSW Premier Gladys Berejiklian on Thursday declared a week-long state of emergency from Friday until January 9.

More than 140 fires are burning across NSW, with dozens uncontained and thousands of firefighters in the field.

Prime Minister Scott Morrison defended his government's response to the crisis, saying NSW has not requested military support for evacuations, such as those taking place in Mallacoota across the Victorian border.

Police, meanwhile, say they have begun an investigation into "all aspects" of the south coast fires, including the seven civilian deaths and the fires' cause.