Eleven trapped gold miners have been saved in east China, some 14 days after an explosion trapped them hundreds of metres underground.

Rescuers in east China on Sunday pulled 11 miners from hundreds of metres underground where they had been trapped for two weeks, state media reported, as the race to locate the remaining 10 intensified.

The miners were brought to the surface starting from around 11 am Sunday local time, state broadcaster CCTV reported - a major breakthrough for a rescue operation that has captivated the nation.

One miner was in "extremely weak physical condition" and rushed to hospital, CCTV said.

The 11 miners were rescued after the air ventilator shaft was cleared, the official state news agency Xinhua reported, citing the operation's command centre.

A further ten remain unaccounted for. 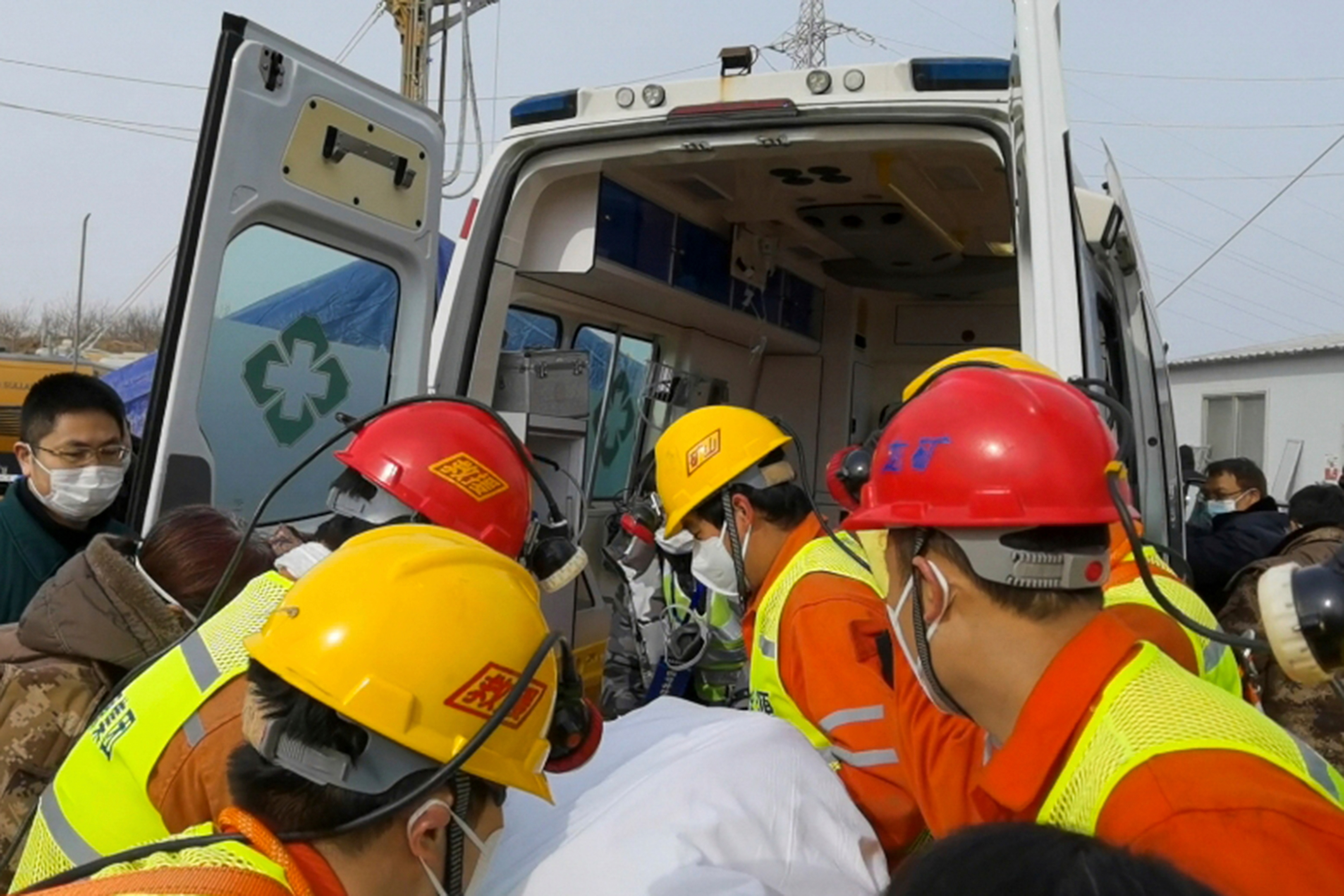 In this photo released by Xinhua News Agency, rescuers carry a trapped miner to an ambulance in Qixia City in east China's Shandong Province on Sunday.
AAP

Specialist teams have been battling difficult conditions since an explosion at the Hushan mine in Shandong province trapped the miners underground amid rising waters on 10 January.

The explosion occurred in a ventilator shaft, causing a blockage that damaged the cable car.

On Sunday morning the huge obstacles suddenly fell to the bottom of the shaft, allowing the operation to take a big step forward, rescue expert Du Bingjian said.

"After the obstacles fell to the bottom of the shaft, the rescue team started to bring up the miners and suspended the drilling work," Du told the Global Times.

"It is currently unclear when the rescuers will reach the Sixth Central Section where the missing miners are believed to be." 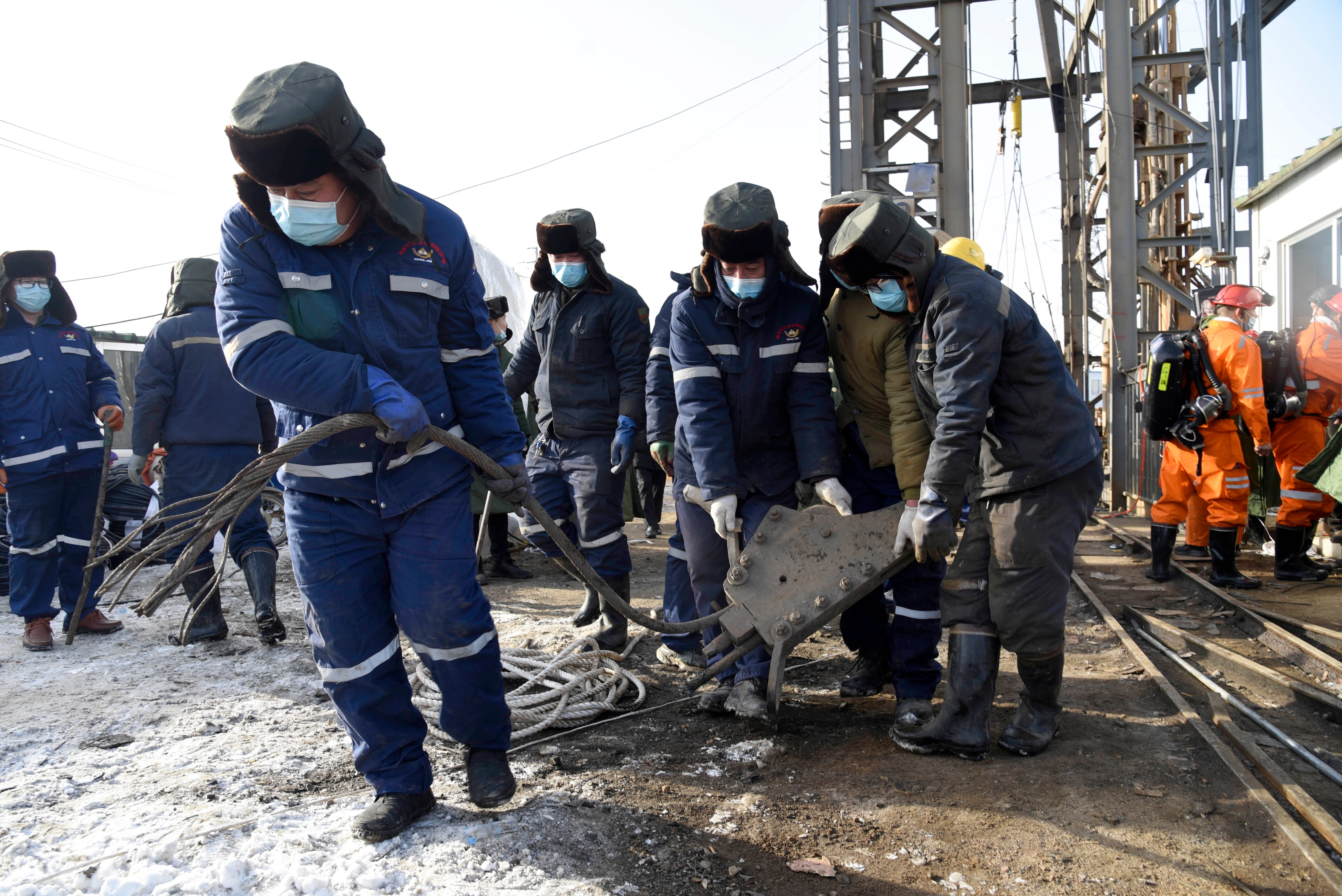 In this photo released by Xinhua News Agency, rescuers work at the site of a gold mine that suffered an explosion in Shandong Province on 12 January.
AAP

State broadcaster footage on Sunday showed a small elevator carriage lifted to the surface, accompanied by rescue workers. A masked man, who appeared unable to stand, was carried out.

Later footage showed emergency workers lifting out other miners, who wore black shades to protect their eyes from the light. One appeared to be holding his hands as if praying.

Contact was first established a week ago with a group of 11 miners trapped in a section of the mine around 580 metres below the surface.

One of them was seriously injured in the initial explosion and died after falling into a coma. In this photo released by China's Xinhua News Agency, rescuers work at the site of the gold mine that suffered an explosion in Qixia on Wednesday, 13 January.
AAP

Another miner was found alive by rescuers as they attempted to reach the group.

Rescue teams have been lowering food, medicine and other supplies to the group through several lifeline shafts drilled into the rock.

State media reported Friday that the health of the miners had been gradually returning to a "normal state" after regular deliveries of food.

Life detectors and nutrient solutions have been lowered to other parts of the mine in the hope of reaching those still missing.

In December, 23 workers died after becoming stuck underground in the southwestern city of Chongqing.