Threatened species habitat larger than the size of Tasmania has been destroyed since Australia’s environment laws were enacted, and 93 per cent of this habitat loss was not referred to the federal government for scrutiny, our new research shows.

The research, published today in Conservation Science and Practice, shows that 7.7 million hectares of threatened species habitat has been destroyed in the 20 years since the Environment Protection and Biodiversity Conservation (EPBC) Act 1999 came into force. 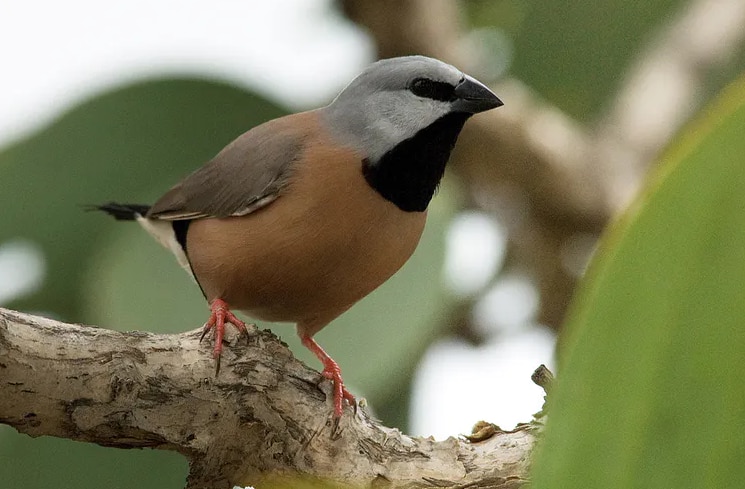 Some 85 per cent of land-based threatened species experienced habitat loss. The iconic koala was among the worst affected. More than 90 per cent of habitat loss was not referred or submitted for assessment, despite a requirement to do so under Commonwealth environment laws.

Our research indicates the legislation has comprehensively failed to safeguard Australia’s globally significant natural values, and must urgently be reformed and enforced.

What are the laws supposed to do?

The EPBC Act was enacted in 1999 to protect the diversity of Australia’s unique, and increasingly threatened, flora and fauna. It was considered a giant step forward for biodiversity conservation and was expected to become an important legacy of the Howard Coalition government. Clearing and land-use change is regarded by ecologists as the primary threat to Australia’s biodiversity. In Queensland, land clearing to create pasture is the greatest pressure on threatened flora and fauna.

Any action which could have a significant impact on protected matters, including habitat destruction through land clearing, must be referred to the federal government for assessment. 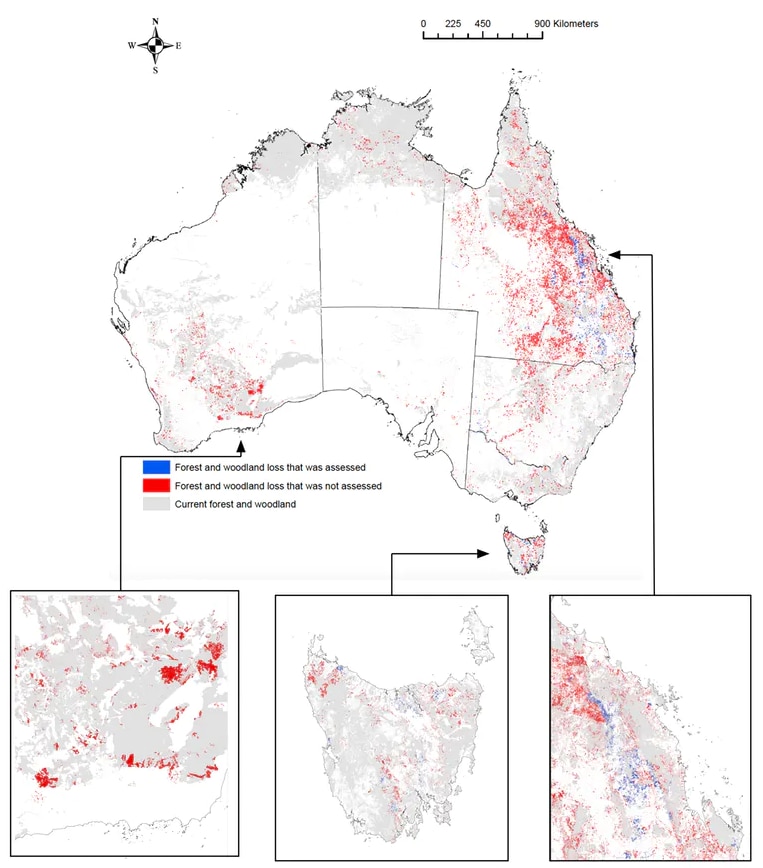 The law is not being followed

We examined federal government forest and woodland maps derived from satellite imagery. The analysis showed that 7.7 million hectares of threatened species habitat has been cleared or destroyed since the legislation was enacted.

Of this area, 93 per cent as not referred to the federal government and so was neither assessed nor approved. 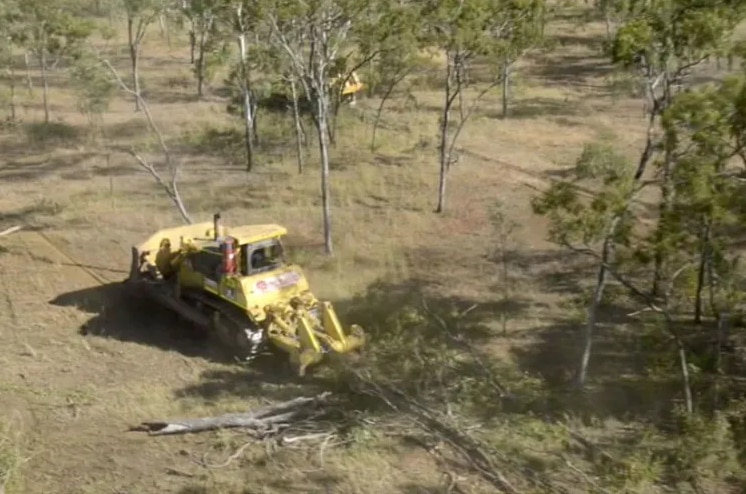 It is unclear why people or companies are not referring habitat destruction on such a large scale. People may be self-assessing their activities and concluding they will not have a significant impact.

Others may be seeking to avoid the expense of a referral, which costs A$6,577 for people or companies with a turnover of more than A$10 million a year.

The failure to refer may also indicate a lack of awareness of, or disregard for, the EPBC Act.

Our research found that 1,390 (85 per cent) of terrestrial threatened species experienced habitat loss within their range since the EPBC Act was introduced.

Among the top ten species to lose the most area were the red goshawk, the ghost bat, and the koala, losing 3 million, 2.9 million, and 1 million hectares, respectively.

In less than two decades, many other imperilled species have lost large chunks of their potential habitat. They include the Mount Cooper striped skink (25 per cent), the Keighery’s macarthuria (23 per cent) and the Southern black-throated finch (10 per cent).

We found that almost all referrals to the federal government for habitat loss were made by urban developers, mining companies and commercial developers. A tiny 1.3 per cent of referrals were made by agricultural developers - despite clear evidence that land clearing for pasture development is the primary driver of habitat destruction.

Alarmingly, even when companies or people did refer proposed actions, 99 per cent were allowed to proceed (sometimes with conditions).

The high approval rates may be derived, in part, from inconsistent application of the “significance” test under the federal laws. 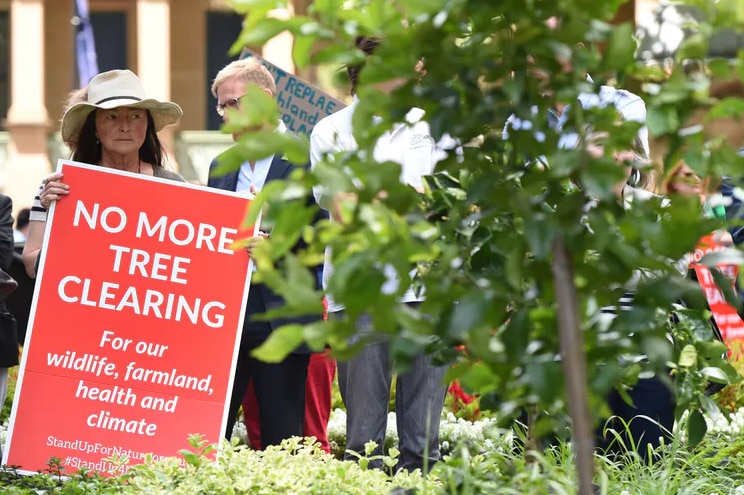 For example, in a successful prosecution in 2015, Powercor Australia and Vemco] were fined A$200,000 for failing to refer clearing of a tiny 0.5 hectares of a critically endangered ecosystem. In contrast, much larger tracts of habitat have been destroyed without referral or approval, and without any such enforcement action being taken.

Clearer criteria for determining whether an impact is significant would reduce inconsistency in decisions, and provide more certainty for stakeholders.

The laws must be enforced and reformed

The Act must, as a matter of urgency, be properly enforced to curtail the mass non-referral of actions that our analysis has revealed.

If nothing else, this will help Australia meet its commitment under the Convention on Biological Diversity to prevent extinction of known threatened species and improve their conservation status by 2020.

Mapping the critical habitat essential to the survival of every threatened species is also an important step. The Act should also be reformed to ensure critical habitat is identified and protected, as happens in the United States.

Australia is already a world leader in modern-day extinctions. Without a fundamental change in how environmental law is written, used, and enforced, the crisis will only get worse.

Michelle Ward receives funding from the Research and Training Program by the Federal Government.

April Reside is a scientific advisor for the Black-throated Finch Recovery Team and is on Birdlife Australia's Research and Conservation Committee and Threatened Species Committee. In the past, April has received funding from the Regional NRM planning for climate change program, the National Climate Change Adaptation Research Facility, and the NESP Threatened Species Recovery Hub.

Hugh Possingham receives funding from the Australian Research Council and the National Environmental Science Program. As well as being a Professor at The University of Queensland, he is The Chief Scientist of The Nature Conservancy (globally).

James Watson receives funding from Australian Research Council and National Environmental Science Program. As well as being a Professor at The University of Queensland, he is the Director of Science and Research Initiative at the Wildlife Conservation Society.

Jeremy Simmonds receives funding from the National Environmental Science Program's Threatened Species Recovery Hub, the Science for Nature and People Partnership, and The Nature Conservancy. He is a member of BirdLife Australia.

Martin Taylor teaches Conservation Policy at University of Queensland and is also a conservation scientist with WWF-Australia and a member of the IUCN World Commission on Protected Areas.