A Nairobi-bound Boeing 737 crashed six minutes after an early-morning takeoff from Addis Ababa Sunday, killing all eight crew and 149 passengers on board, including tourists, business travellers, and at least one delegate to a UN meeting.

It is the second aviation incident involving the new Boeing 737 MAX-8 model, coming six months after the same model crashed 13 minutes after take off from Jakarta.

One hundred and eighty-nine people were on board Flight JT 610 flown by Indonesian airline Lion Air. 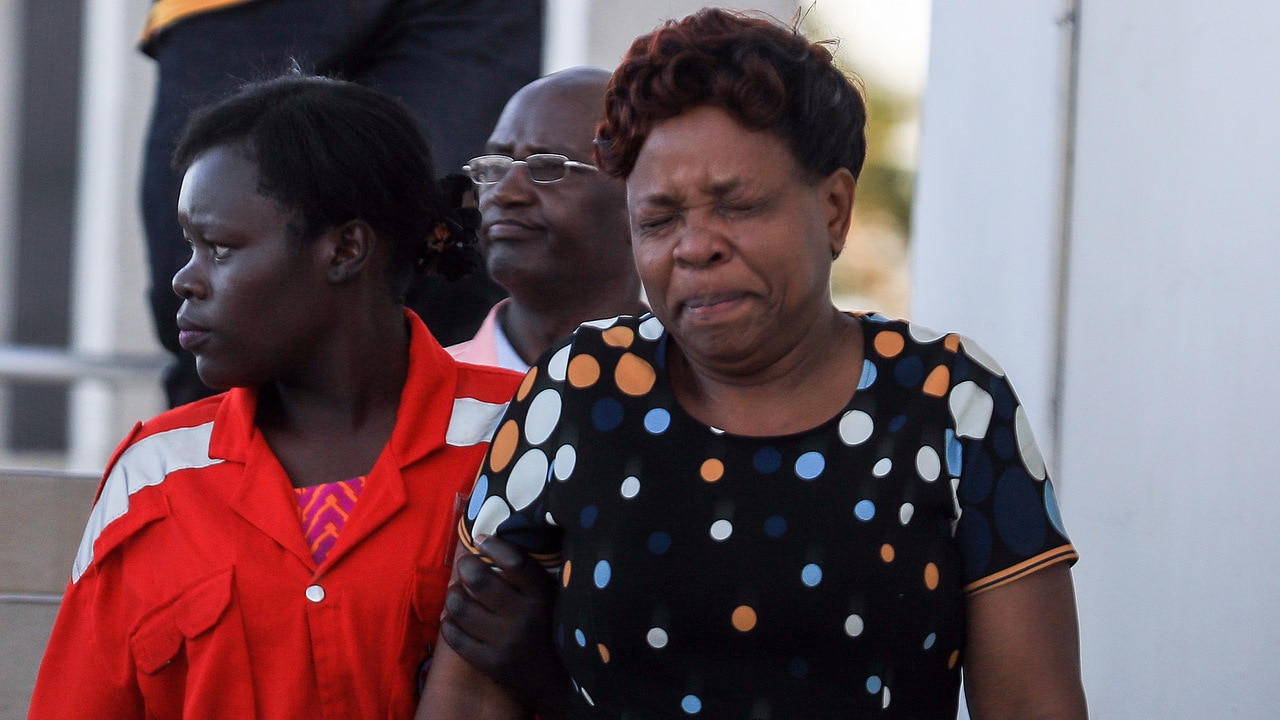 A Kenyan woman (R) is comforted by a Red Cross worker (L), after getting information about her loved ones that were on board the Ethiopian Airlines Flight 302.
AAP

Ethiopian and American investigators will probe the crash. The airline says the experienced pilot had been given clearance to turn the plane around after encountering difficulties.

Amid a global stream of condolences, many gathered in tears at Nairobi's Jomo Kenyatta International Airport (JKIA), as the victims' identities started to emerge.

"The group CEO who is at the scene right now deeply regrets to confirm there are no survivors," the airline tweeted alongside a picture of Tewolde GebreMariam in a suit holding a piece of debris inside a large crater.

Flight ET 302 crashed near the town of Bishoftu, 62 kilometres southeast of the capital Addis Ababa, the airline said, adding that the plane was a Boeing 737-800 MAX, registration number ET-AVJ.

That model number does not exist however and multiple aviation websites have later identified the plane as a new 737 MAX-8. 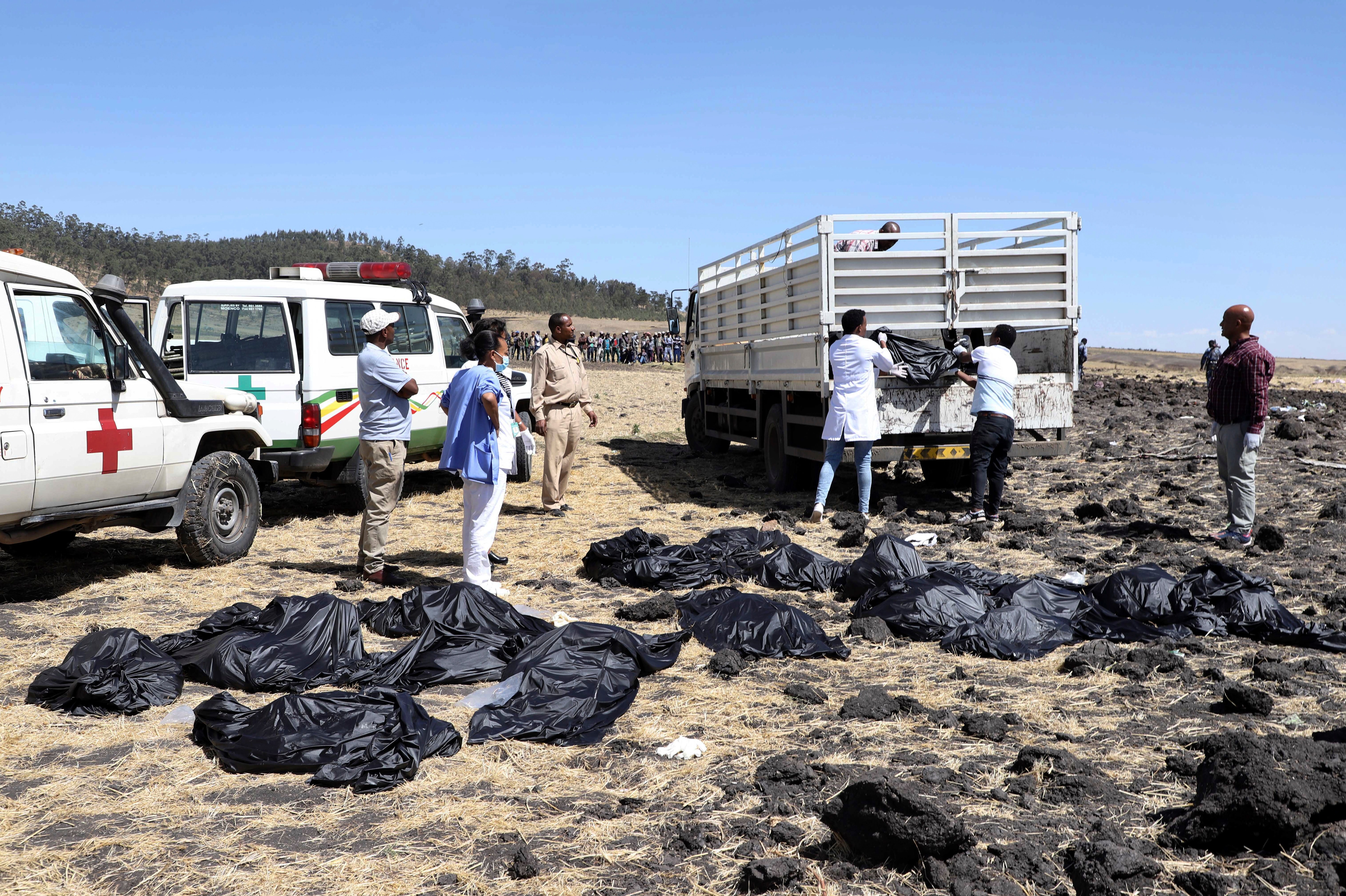 Rescuers remove body bags from the scene of an Ethiopian Airlines flight that crashed shortly after takeoff at Hejere near Bishoftu.
APP

Ethiopian Airlines said Kenya had the largest number of casualties with 32, followed by Canada with 18, Ethiopia nine, then Italy, China, and the United States with eight each.

Britain and France each had seven people on board, Egypt six, and Germany five.

Twelve countries in Africa and 14 in Europe had citizens among the victims. Relatives comfort each other at a help centre set up for the relatives of passengers of crashed Ethiopian Airlines Flight 302.
AAP

"It is with deep sorrow that I announce that my dear wife, Blanka, son Martin and daughter Michala, died in the air disaster in Addis Ababa this morning," Slovak MP Anton Hrnko wrote on Facebook.

Swedish CEO and father-of-three Jonathan Seex is also among four Swedes who died in the crash. 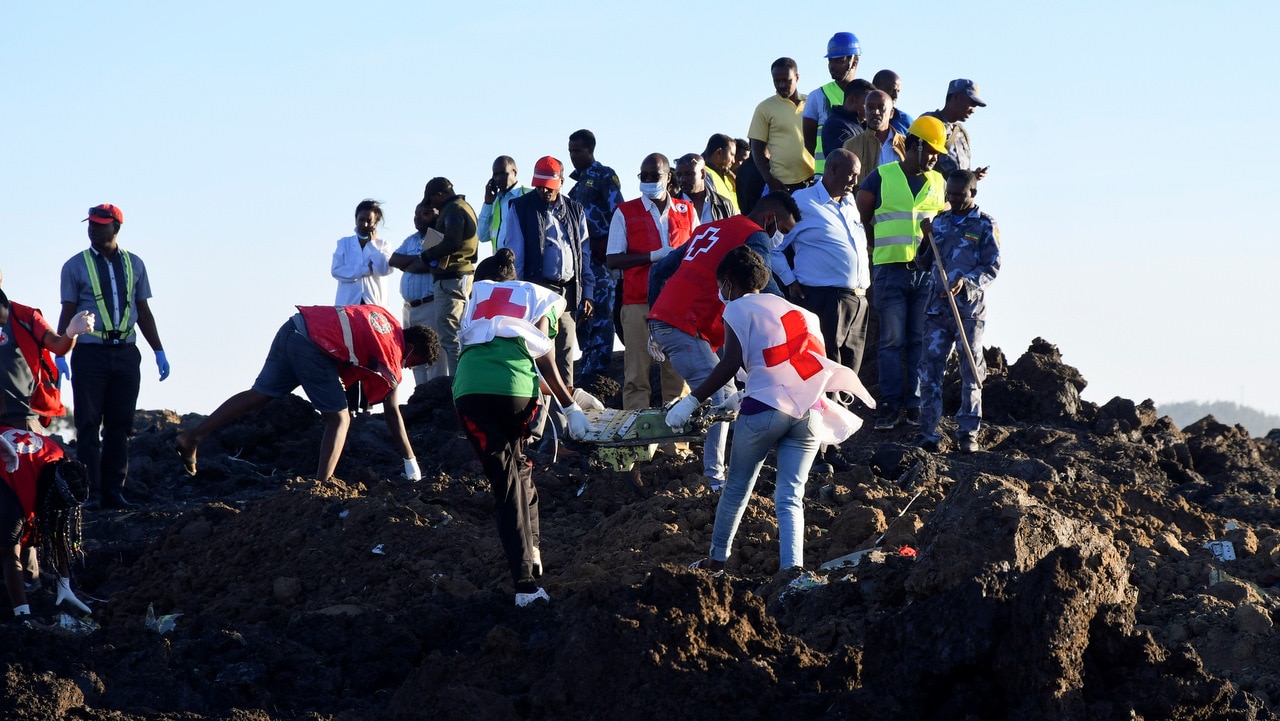 The hospitality company Tamarind Group said it mourned the death of Mr Seex, their CEO.

"It is with immense shock and grief to inform you of the tragic news that Tamarind CEO, Jonathan Seex, was on the ill-fated Ethiopian Airlines flight," the company, which owns and operates several restaurants in Africa, said on Facebook.

Sweden's Ministry for Foreign Affairs confirmed the death of four nationals in a statement.

No Australians were listed among the passengers at this time.

In a statement, Australia's Department of Foreign Affairs and Trade said: "Our Embassy in Addis Ababa continues to make urgent inquiries of local authorities in Ethiopia."

Foreign governments said tourists, business people, doctors, and a Kenyan football official were among the dead.

The United Nations had several staff members on board the plane, with the body seeking to confirm the exact number.

Earlier, a UN source said "it is expected that a least a dozen of the victims were affiliated with the UN". The same source said freelance interpreters traveling to a UN conference on the environment might also be among the dead.

In a statement, UN Secretary-General Antonio Guterres said he was "deeply saddened at the tragic loss of lives." "He conveys his heartfelt sympathies and solidarity to the victims' families and loved ones, including those of United Nations staff members, as well as sincere condolences to the government and people of Ethiopia," the statement said.

"The United Nations is in contact with the Ethiopian authorities and working closely with them to establish the details of United Nations personnel who lost their lives in this tragedy."

UNEP acting head Joyce Msuya said in a message to staff that at least one staff member of the UN Environment Programme meeting in Nairobi is unaccounted for.

The UN's World Food Programme executive director David Beasley confirmed seven members of from his agency had died in the crash.

The WFP family mourns today -- @WFP staff were among those aboard the Ethiopian Airlines flight. We will do all that is humanly possible to help the families at this painful time. Please keep them in your thoughts and prayers.

Ethiopian Airlines said the plane had taken off at 8:38 am (0538 GMT) from Bole International Airport and "lost contact" six minutes later.

It came down near Tulu Fara village outside the town of Bishoftu.

The carrier, which changed its logo on Twitter to black and white from its trademark green, yellow, and red, said "there are no survivors".

"We can only hope that she is not on that flight," Peter Kimani, who had come to fetch his sister at Nairobi's JKIA, told AFP after news of the disaster reached those waiting in the arrivals hall. 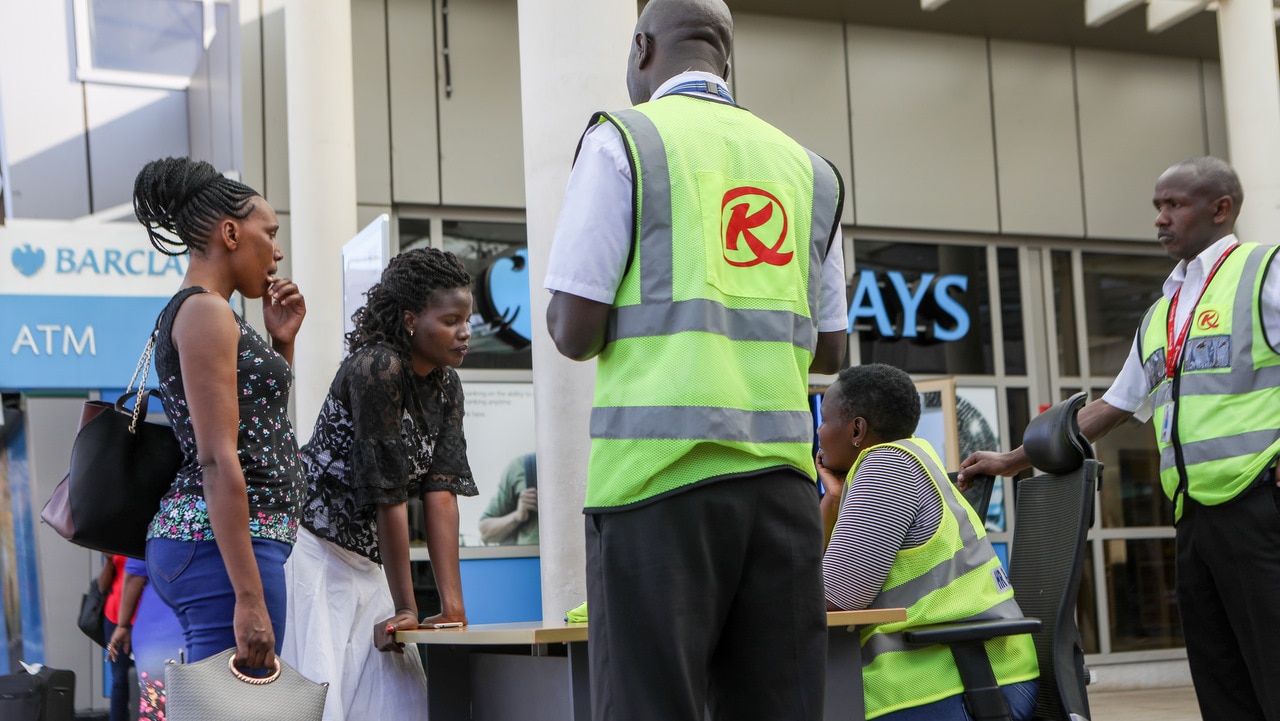 Relatives talk to airport staffat a help desk set up for the crashed Ethiopian Airlines flight ET 302.
AAP
Loved ones were later brought to the onsite Sheraton Hotel where they were debriefed and offered counselling. Journalists were not allowed in, but could hear sobbing from inside.

For one family member waiting in Nairobi there was a happy ending.

Khalid Ali Abdulrahman was waiting for his son who works in Dubai and feared the worst when a security official told him the plane had crashed.

"I was shocked, but shortly after, my son contacted me and told me he is still in Addis and did not board that flight, he is waiting for the second one which has been delayed."

Ethiopia's parliament declared Monday a day of national mourning after a Nairobi-bound Ethiopian Airlines plane crashed, killing all 157 people onboard.

"The House of People's Representatives have declared March 11, 2019, a national day of mourning for citizens of all countries that have passed in this tragic accident," the office of Ethiopia's Prime Minister Abiy Ahmed said on Twitter on Sunday.

PM Abiy Ahmed shared his condolences in a televised address on behalf of the FDRE Government.

The House of People’s Representatives have declared March 11, 2019 a national day of mourning for citizens of all countries that have passed in this tragic accident. #PMOEthiopia pic.twitter.com/F0aA1sPnYP

"I cannot seem to find words comforting enough to the families and friends of those who might have lost their lives in this tragedy," Maalim said in a statement.

Sympathy messages also came from the governments of Kenya, Uganda, Britain and Germany.

We are saddened by the news of an Ethiopian Airlines passenger aircraft that is reported to have crashed 6 minutes after takeoff en route to Kenya. My prayers go to all the families and associates of those on board.

“I was deeply saddened to hear of the devastating loss of life following the plane crash in Ethiopia. At this very difficult time my thoughts are with the families and friends of the British citizens on board and all those affected by this tragic incident.” – PM @Theresa_May

Ethiopian Airlines said it would send staff to the accident scene to "do everything possible to assist the emergency services."

It would also set up a passenger information centre and a dedicated telephone number for family and friends of people who may have been on the flight.

Prime Minister Justin Trudeau deplored the "devastating news" that 18 Canadian nationals were among the 157 people killed in the crash.

"Devastating news from Ethiopia this morning," Trudeau said on Twitter. "Our thoughts are with all the victims on Flight ET302, including the Canadians who were on board."

Devastating news from Ethiopia this morning. Our thoughts are with all the victims on flight ET302, including the Canadians who were on board, and everyone who lost friends, family, or loved ones. Canadians in need of assistance, contact sos@international.gc.ca or 613-996-8885.

Canadians join people around the world in mourning the loss of so many lives today. Our hearts are breaking for the families and friends of the 18 Canadians who were killed. Please read my full statement on the tragic plane crash in Ethiopia: https://t.co/FG3wVmu5m8

"Canadian consular officials were immediately deployed to Addis Ababa Bole International Airport today" to work with Ethiopian agencies to determine the facts and "provide the most effective support to Canadian families at this difficult time," she said in a statement.

A witness told AFP the plane came down in flames.

"The plane was already on fire when it crashed to the ground. The crash caused a big explosion," Tegegn Dechasa recounted at the site, littered with passenger belongings, human remains, and airplane parts around a massive crater at the point of impact. 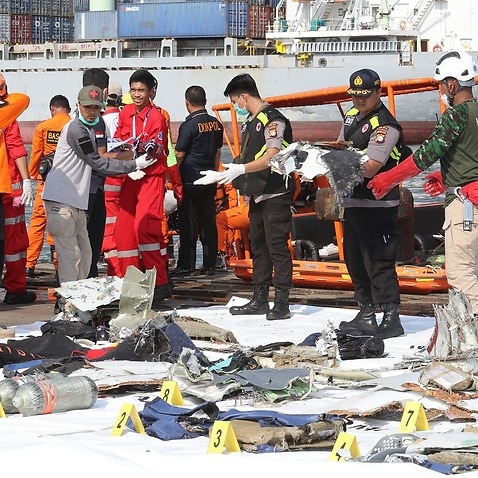 Lion Air crash: Why did a brand new plane plummet into the sea?

"I was near the river near the crash site. Shortly after the crash police and a fire crew from a nearby air force camp came and extinguished the plane’s flames on the ground," Dechasa said.

The plane is the same type as the Indonesian Lion Air jet that crashed last October, 13 minutes after takeoff from Jakarta, killing all 189 people on board. 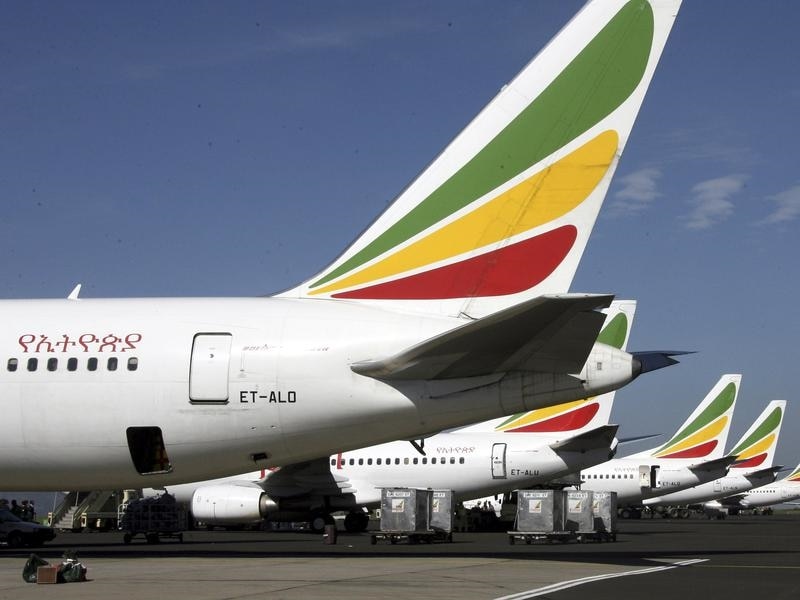 The crash happened six minutes after takeoff for the flight from Addis Ababa to Nairobi.
AAP

There is no indication that a technical problem was to blame for the crash of the Boeing 737-800 MAX operated by Ethiopian Airlines on Sunday which crashed minutes after taking off from Addis Ababa bound for Nairobi.

Virgin Australia has confirmed they have an order for 30 737 MAX-8 planes in place, expected to arrive later this year.

A spokesman told SBS News it was too early to comment on whether the Ethiopian Airlines crash would impact the order.

GebreMariam said the plane had flown in from Johannesburg earlier Sunday, spent three hours in Addis and was "despatched with no remark", meaning no problems were flagged.

Asked if the pilot had made a distress call, the CEO said "the pilot mentioned that he had difficulties and he wants to return. He was given clearance to turn around.

The senior captain, Yared Getachew, had some 8,000 flight hours under his belt.

Additional data from Flightradar24 ADS-B network show that vertical speed was unstable after take off.

Ethiopian and American investigators will probe the crash, said GebreMariam.

Boeing said in a statement that it is "deeply saddened" by the deaths, adding that it will be sending a team to the crash site to provide technical assistance.

The last major accident involving an Ethiopian Airlines passenger plane was a Boeing 737-800 that exploded after taking off from Lebanon in 2010, killing 83 passengers and seven crew.