Freedom of Information documents have revealed the full costs of Prime Minister Scott Morrison's travel and accommodation expenses before the coronavirus struck.

It has been previously revealed by SBS that Mr Morrison embarked on more overseas trips in his first year in office than each of his predecessors.

New figures show the Prime Minister made 17 international trips to 19 nations during his first 15 months in office, at a cost of $3,105,537.

Figures released by the Department of Prime Minister and Cabinet and Defence show Scott Morrison’s State Visit to the United States of America was his most expensive international trip, costing $527,840, including $328,176 in Royal Australian Air Force flights. The visit, in September 2019, was the first abroad by a Prime Minister onboard the new KC-30A aircraft, dubbed ‘Shark One’ by Scott Morrison’s aides.

The former commercial Qantas and JetStar aircraft was refurbished at a cost of $250 million. 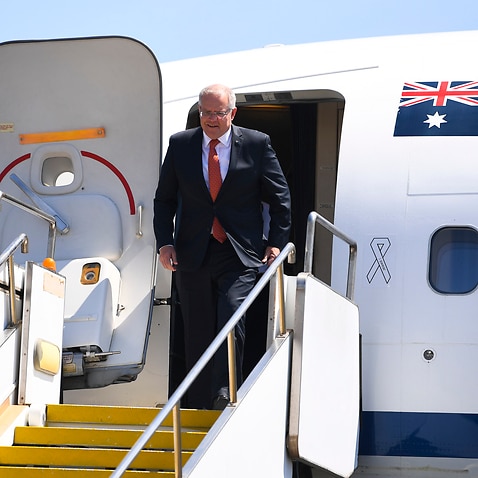 The documents show flights to Wapakoneta in Ohio, where the Prime Minister appeared on stage with President Trump at the Australian-owned Pratt Industries Paper Mill, cost $17,553.

“As the Prime Minister has said, he only travels overseas when it is necessary and will deliver outcomes that benefit Australian families and businesses.”

The spokesperson said the travel schedule included “additional trips to the usual Prime Ministerial schedule” and did not include deducting the cost of journalists accompanying the Prime Minister on overseas visits. The COVID-19 pandemic has meant the Prime Minister has not made any international trips since he attended the East Asia Summit in Thailand in November 2019, cancelling planned visits to Japan and India, co-hosting a series of “virtual summits” instead.

“I hope that virtual summits are part of the future,” the Prime Minister told reporters in Canberra.

“I think there’s rarely been a more frenetic period in which an Australian Prime Minister has engaged with other leaders but the traditional method of leaders coming together also can't be underestimated.

The expenses have raised eyebrows in Canberra, particularly given the Prime Minister’s public critique of what he called “negative globalism”.

“Most Australians will see these travel expenses as very large and won't understand how it is that a Prime Minister could spend this amount on travel in just fifteen months”, Labor Senator Tim Ayres told SBS News.

“This Prime Minter and his friends in the government were very critical of previous Labor Prime Ministers who spent much less travelling around the world putting Australia's interest first.” Michael Shoebridge from the Australian Strategic Policy Institute told SBS News the investment in meeting international counterparts in person has likely helped during the pandemic.

“If you want Australians to be safe and prosperous, then you want our government and our leadership to be engaged with the world and that is a cheap price for those outcomes,” he said.

“Scott Morrison was at the G20 meeting in the middle of last year and he met a bunch of world leaders there.

“That meant that when the pandemic hit and people couldn't meet face to face, he already had that reservoir of relationships and rapport, he's already met them physically, and that makes the virtual meeting far more effective.”

Two police officers are cleared over Breonna Taylor's shooting. A third faces charges, but not for her death