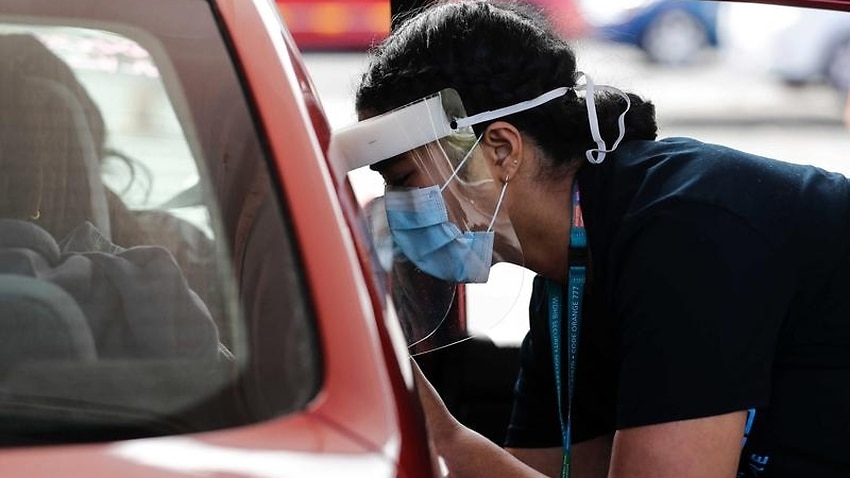 COVID-19 cases in New Zealand are on the rise, with modellers predicting a surge in coming weeks. (AAP)

The New Zealand government has admitted it expects daily COVID-19 case numbers to reach triple figures for the first time during the pandemic.

Cases are on the rise in New Zealand, with 71 infections reported on Thursday - the highest daily number in six weeks - pushing the seven-day average to 49.

All new cases are in Auckland, the centre of the outbreak.

Director of Public Health Caroline McElnay said the "sobering" result included cases "now being seen across many parts of Auckland".

There are 33 Kiwis in hospital, including five in intensive care.

Under questioning, Dr McElnay said cases were likely to double within a fortnight under the current 'R' value of 1.2 to 1.3, pushing the capacity of NZ's health system.

Contact tracing efforts will also begin to struggle should cases reach 170 a day.

The trends and spread have convinced a growing number of public health experts and COVID-19 modellers that Auckland should return to a level four lockdown..

"If that continues, we would be seeing around 160 new cases per day by early November," University of Auckland modeller Michael Plank said.

University of Otago epidemiologist Amanda Kvalsvig said "it's time to talk about a circuit-breaker".

"A move back to alert level four is the best, and probably only, chance of reversing these highly concerning trends," she said.

Maori and Pacific communities - which make up roughly one fifth of the NZ population - account for more than 1400 of the 1790 people infected during this outbreak.

While cases are low by global standards, the Delta outbreak identified on August 17 has now overtaken NZ's first outbreak to be its biggest of the pandemic.

Until the arrival of Delta in mid-August, New Zealand had the virus under control through its elimination strategy, experiencing more days without COVID-19 restrictions than with them.

"This outbreak is not in a small number of clusters in a small geographic area. It is affecting people in all parts of Auckland," he said.

Health officials have stopped reporting suburbs of concern or active sub-clusters, failing to link more than 100 unlinked cases in the last fortnight.

"What that means is there's a lot more cases out there," University of Auckland epidemiologist Rod Jackson told Radio NZ.

"Delta just spreads so quickly, so widely ... that it just overwhelms all services.

Auckland moved to an alert level four lockdown on August 18, reducing to level three on September 22 - a shift which has coincided with rising cases.

The government has ruled out a return to level four, saying Aucklanders were less likely to comply with stricter rules after their 58-day lockdown.

It is all-in on a strategy of upping vaccination rates - which currently sit at 81 per cent of eligible Kiwis being at least partially vaccinated, and 59 per cent double-dosed.

"In such a situation it is very tough to vaccinate our way out of the growing case numbers," he said.