The Fair Work Ombudsman has taken out large, full page ads in major metropolitan newspapers to send a message to international students – don’t be afraid to ask questions about your rights at work.

The open letter advertisement, published in three major metropolitan newspapers and three regional newspapers across Australia, are designed to encourage young workers to seek help if they feel exploited.

By Friday the ads will be published in ten foreign language newspapers including Chinese, Indian and Vietnamese.

Fair Work Ombudsman Natalie James said the ads were focused on international students who were possibly fearful of coming forward due to misunderstanding the law.

Currently, international students make up a large proportion of temporary entrants into Australia - more than 560,000 as at July 2017.

In the last financial year 49 per cent of litigations filed by the FWO in court involved a visa holder. One third of these cases involved an international student.

Ms James urged students to get informed about their rights at work and speak up if they have concerns about their conditions of employment.

She stressed that international workers had the same rights as any other worker in Australia. 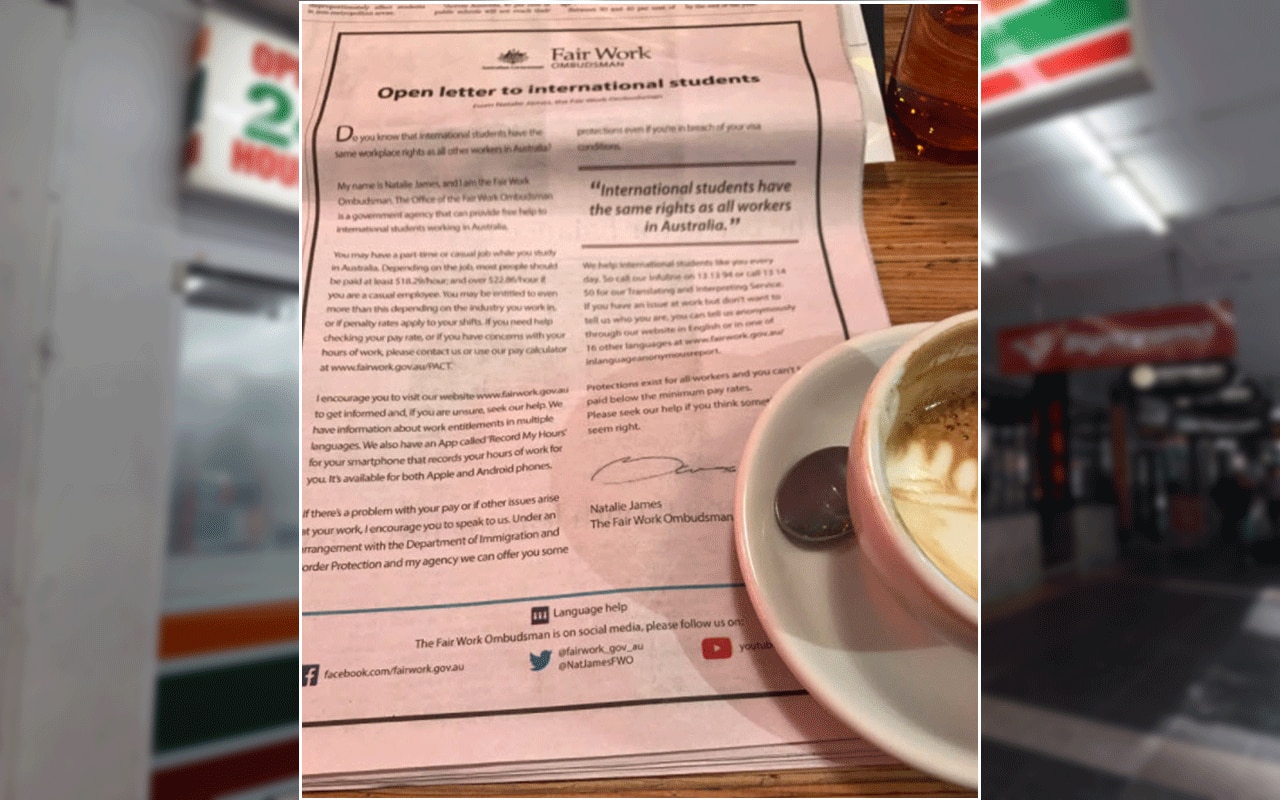 The full page advertisement which featured in metropolitan and community newspapers on Monday.
Twitter @NatJamesFWO

“We know that international students can be reluctant to speak out when something is wrong, making them particularly vulnerable to exploitation. This is especially the case when students think that seeking assistance will damage future job prospects or lead to the cancellation of their visa.”

Ms James said the body was aware of cases where employers had threatened students with deportation in order to persuade them to work longer hours outside their visa requirements.

"In some cases these same employers have altered payslips and underpaid hourly rates in order to disguise the number of hours the student has worked," Ms James said.

"I would like to reassure international students that in line with an agreement between my agency and the Department of Immigration and Border Protection, you can seek our assistance without fear of your visa being cancelled, even if you've worked more hours than you should have under your visa."

The FWO found that many international students were unaware of their rights at work and unsure of where to seek help.

International students are entitled to the same minimum wages as all workers in Oz. We can help retrieve unpaid wages and protect your visa. https://t.co/K5dqT1aMur

Some students told researchers they had been subject to intimidation by their employers, who threatened to deport or "blacklist" them for future work if they complained.

It was found 60 per cent of international students who participated in FWO research believed the situation would either remain the same or get worse if they reported the issue.

"We know that it can be difficult to understand what is right or wrong at work, or to speak up if you are concerned. This is why we are committed to making it as easy as possible for international students to access the help they need," Ms James said.

In August 2017 Melbourne’s Meatball and Wine Bar faced court for allegedly underpaying 26 workers in restaurants across the CBD, Richmond and Collingwood.

In August 2017 a Newcastle Pizza Hut franchise was found to have underpaid 24 employees a total of almost $20,000.

In July 2017 a 24-hour café operator in Melbourne’s Crown Casino faced court for allegedly underpaying 54 workers over $70,000. 25 of the workers were visa holders.

International students seeking assistance can visit http://www.fairwork.gov.au/ or call the Fair Work Infoline on 13 13 94 or our Translating and Interpreting Service on 13 14 50.