Here are some key facts on coal seam gas: how big is it in Australia and what are its potential environmental impacts?

With so much debate around coal seam gas in Australia, we take a look at what it is, the current number of wells in the country, the available drilling techniques and potential environmental impacts.

WHAT IS COAL SEAM GAS?

Coal seam gas is methane formed from the decay of organic matter over time, formed in the same way as coal and oil. Methane is held within the coal seam by water pressure in the seam.

Extracting the gas requires depressurising the coal seam by removing the water, and may include other techniques to increase the permeability of the seam.

DIFFERENCE BETWEEN CSG AND SHALE GAS

Shale gas and coal seam gas are often confused one with one another. Shale gas is methane held within shale layers, rather than a coal seam. Shale is much harder than coal and always requires fracturing ('fracking') to allow the gas to flow.

There is currently no shale gas production in Australia, although there are large shale gas reserves in SA, the NT and WA. In the US, shale gas supplies 15 per cent of gas consumption.

WHAT'S DRIVING THE DEMAND OF CSG IN AUSTRALIA?

CSG accounts for 27 per cent of Australian gas reserves: it is set to supply at least 30 per cent of the whole nation's domestic market by 2030, and 50 per cent of gas demand in eastern Australia.

All CSG reserves are in NSW and Queensland. In the 'Eastern Gas Market' (NSW, Queensland, Victoria, SA, Tasmania), CSG makes up 78 per cent of gas reserves.

According to the Australian Energy Regulator, assuming that gas use keeps increasing at the current rate of 4 per cent per year until 2025, conventional gas in the Eastern Gas Market will last for nine years, while CSG will last for 27 years.

As shown in this ABARE map, the Eastern Gas Market is not connected to the Western Market (WA) and the Northern Market (NT) by pipelines. 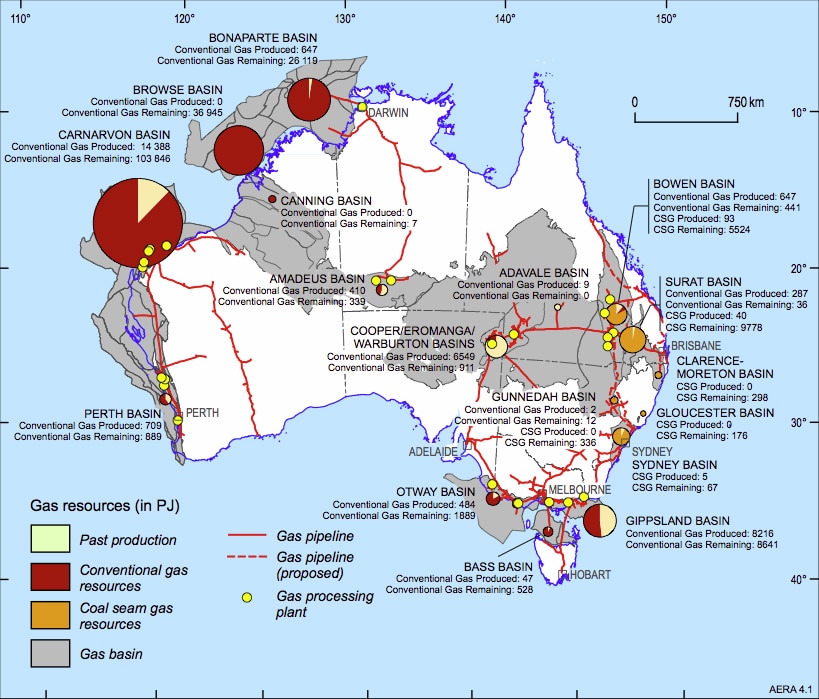 Horizontal or angled wells can also be drilled to reach the coal seam.

If the flow of gas is insufficient, the coal seam gas may be fractured ('fracked') to increase the permeability of the coal and allow the gas to flow more freely.

Hydraulic fracturing involves pumping large volumes of a fluid, usually water, at high pressure down the well causing the coal seam to fracture for distances of up to 400 metres.

The fracking fluid most often contains sand to hold the fractures open and a mixture of added chemicals to help the drilling process.

There has been concern over the use of BTEX chemicals (benzene, toulene, ethyl-benzene and xylene) in fracking fluids; however the use of these chemicals has been banned both in Queensland and NSW.

However, other chemicals are being used in Australia.

Fracking is expensive, so it is not undertaken unless gas flows are low. According to the Queensland Government, fracking has been used at about eight per cent of the state's 4,500 CSG wells since 2000.

According to a report prepared by the Institute for Sustainable Futures at UTS for the City of Sydney Council, water supply can be affected if the holes drilled into the ground are not properly sealed.

Aquifers can be contaminated by water and chemicals when a hole is drilled through them to reach the coal seam. Toxic materials are also contained in the coal seam and can leak out when it's cracked.

The National Water Commission says "the production of large volumes of treated waste water, if released to surface water systems, could alter natural flow patterns and have significant impacts on water quality, and river and wetland health".

In 2010, two incidents relating to water contamination from BTEX chemicals were reported in Australia, even though in both cases the companies involved said they did not use BTEX chemicals in fracking fluids.

One of the greatest environmental concerns is preserving the waters of the Great Artesian Basin from contamination and depletion, especially in the Surat and Galilee basins in Queensland.

NUMBER OF WELLS IN AUSTRALIA

Commercial production of CSG in Australia started in 1996, although exploration started in 1976. Queensland has far more activity, with numbers of wells perhaps ten times greater than NSW.

According to the Queensland Government, in September 2011 the total number of wells drilled in the state was 4,489.

According to the NSW Department of Trade and Investment, in September 2011 a total of 493 CSG exploration and production wells had been drilled in NSW.

CSG production is regulated mainly by the states, with no national legislative framework.

A temporary ban on fracking is in place in NSW. Queensland has banned the use of BTEX chemicals in fracking fluids.