China's tweet of a doctored photograph of an Australian soldier is the latest in a saga of increasingly tense relations between China and Australia.

A social media post by China’s Foreign Ministry spokesman Zhao Lijian is being described by experts as a clear shift in the country’s foreign policy.

The post, shared on Twitter on Monday, contained a doctored image of an Australian soldier holding a knife to the throat of an Afghan child.

The tweet was in response to the Brereton war crimes inquiry, which has recommended that 19 current or former Australian special forces soldiers face a criminal investigation. Professor Jane Golley from the Australian National University specialises in Sino-Australian relations and the Chinese economy.

She said China’s approach is a classic example of so-called "wolf-warrior diplomacy".

“There has been a shift under Xi Jinping,” Professor Golley told SBS News.

“Previously under Deng Xiaoping, the approach to diplomacy was more cautious … he was known for saying ‘hide your capacities and bide your time'.”

Professor Golley said that aggressive "wolf-warrior" approach was being employed by the deputy director of the Chinese Ministry of Foreign Affairs.

“Zhao Lijian is the poster-child of wolf-warrior diplomacy in China,” Professor Golley said.

“He would have been given implicit permission to post that Tweet … the Chinese government are not going to apologise, what we’ve done is exacerbate an already tense situation."

Lijian Zhao’s post - which fetched tens of thousands of likes and retweets - has been described as an "ironic" tactic given China's strict social media censorship.

“There is a great irony considering a Chinese official would resort to Twitter - which is blocked in China - to send a message to the rest of the world,”  Professor Golley said.

“But certainly if reach is what China wants, Twitter gets you those numbers.” 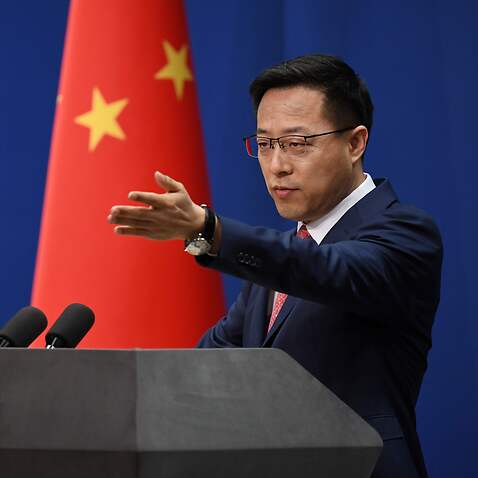 This notion is supported by Delia Lin, a senior lecturer in Chinese studies at the University of Melbourne.

"The Chinese government knows the power of social media and that it’s important to influence as many people as possible ... to make its voice heard," Dr Lin told SBS News.

"The only possible explanation is that they are perhaps trying to influence Chinese citizens who are able to see Twitter or Chinese people living overseas.

"It might be able to influence people who have questions … to them, it shows that China condemns cruelty and perhaps they should question the Australian government."

With other countries, notably the United States, using Twitter to spread messaging, Professor Golley said it was unsurprising China has tried to harness the social media site too.

“Maybe they are playing the game the way others in the West are playing it too, so Twitter seems like a pretty good place to start, you can get away with lying there," Professor Golley said.

“Everyday US President Donald Trump tweets things that are profoundly untrue, does it go unnoticed?

“On Twitter you immediately want to react or respond so maybe they’re deliberately luring the Australian government in … unfortunately the world seems to be getting dirtier and dirtier."

The tweet is also a tactic Professor Golley refers to as "what-aboutism".

“It’s quite clever diplomacy to put the shoe on the other foot,” she said.

“Critising the US, Australia and allies for the decade long war in Afghanistan, is China saying, ‘you’re busily criticising our human rights record but you’re also committing human rights abuses'.

“They would be seeking to reduce the criticism of their own human rights record...such as the treatment of Xinjiang”

Dr Lin said the tweet was all about changing China's messaging.

"Rather than be defensive of its own human rights record, China has turned around and created a new discourse about discrediting the West.

"In this case, it's trying to discredit the Australian Defence Force and at large portray the West as being hypocritical while China takes the high moral ground."

Professor Golley said China may also be trying to appease other parts of the world.

“Criticisms relating to US, Australia and other US allies after nearly two decades of war with Afghanistan and the Middle East will resonate well with the developing world and much of the Muslim world," Professor Golley said.

"It presents an opportunity for China to criticise countries which are in turn criticising China’s treatment of the Muslim community in its own country.

“It seems that China is using Australia to set an example for other Western countries in particular, that if they start pushing on China as hard as we have, they’ll make economic and diplomatic trouble for them.’