The family of a woman allegedly killed by her boyfriend in Melbourne said they are "heartbroken" by her death.

Natalina Angok, 32 from Geelong, was found dead in the city's Chinatown district on Wednesday morning.

Christopher Allen Bell has since faced court charged with her murder.

"We are heartbroken. Our family is finding the strength to come to terms with this tragedy and the loss of Natalina Angok," her family said, in a statement, following the court appearance.

Earlier Ms Angok's sister Helena told The Age newspaper that "they were dating, in a relationship. That was her boyfriend," adding they had been together for more than a year. 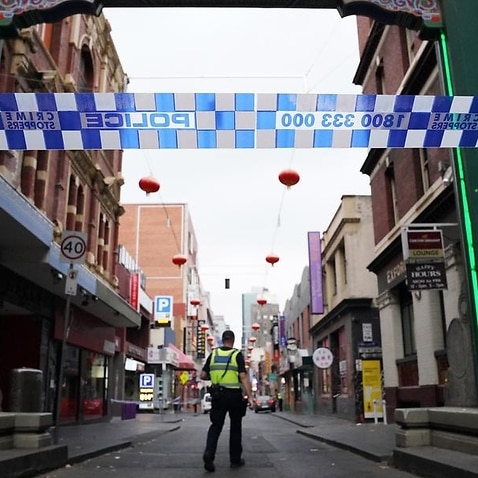 On Friday, Bell sat stooped with his face in his hands at his second court appearance in two days.

Family and friends of Ms Angok piled into Melbourne Magistrates Court to watch the brief hearing.

Bell is being held on a single charge of murder.

During his first court appearance on Thursday, his lawyer Steven Pica said Bell had been unmedicated for a long time.

He had been released from a mental inpatient facility "only a week ago", after staying for a week, the court was told.

It was noted for custody authorities that Bell was a diagnosed schizophrenic and his mental health needs should be assessed as soon as possible.

There were no further issues to address, Mr Reynolds was told on Friday.

Ms Angok's family is in shock after her killing, her sister Helena said.

"She didn't deserve to die in such a way, being killed by someone.

"She was a loving and caring sister, and a down-to-earth person, not a troublemaker. She loved everybody, even if someone did something bad to her, she would just talk and laugh with them."

Ms Angok's body was found near Little Bourke Street just after 6.30am on Wednesday. Bell was arrested later the same day.

Police have until 19 July to compile their brief of evidence against Bell over Ms Angok's death, the cause of which is hoped to be revealed in autopsy results.

Bell will remain in custody and is due to face court again for a committal mention on 30 August.