Australian war hero Teddy Sheean will be awarded a posthumous Victoria Cross following a review by an expert panel.

Australian war hero Teddy Sheean will be awarded a posthumous Victoria Cross (VC) following a review by an expert panel, causing his nephew to shed tears of joy.

Prime Minister Scott Morrison established an independent panel earlier this year, after Mr Sheean had been denied the military honour for decades. Mr Morrison says the matter is in the hands of Governor General David Hurley, who will present the matter to the Queen.

"The Victoria Cross is the highest award that can be provided to any Australian serviceman or woman for their valour," Mr Morrison said.

"As prime minister and as a government we have a very special responsibility to ensure that the integrity of the Victoria Cross is upheld for all those who have been honoured ... you don't go around handing out VC's on the basis of popularity or sentiment.

"Sheean's courageous sacrifice of his life to save the lives of his shipmates makes him eligible for the VC of Australia." Teddy Sheean (right) was only 18-years-old, having experienced less than two years at sea.

Mr Sheean died in 1942 when the HMAS Armidale, destined for Timor, was sunk by Japanese bombers in the Timor Sea.

Witness accounts say the 18-year-old strapped himself to an anti-aircraft gun after freeing a life raft, in a bid to protect his shipmates from a Japanese-led aerial attack after the order was given to abandon ship.

Despite being wounded in his chest and back, Mr Sheean was last seen firing his gun, as the ship succumbed to the waves.

He is credited with saving the lives of 49 crew. 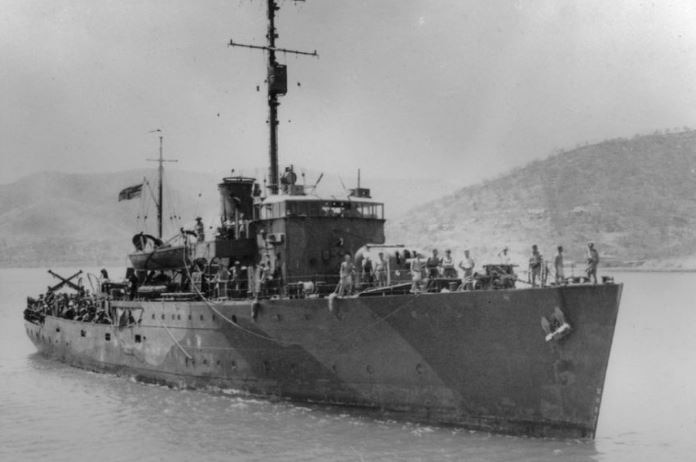 "I'll remember two dates forever now: the 1st of December 1942 is when Teddy's action was, and now the 10th of August 2020 is going to be a very, very special date in my mind forever," Mr Ivory said with tears in his eyes.

"It's been a long battle but believe me, I would do it all again because I believe so strongly in it."

"But I'm sure she's up there with Teddy," Mr Ivory said.

Mr Nelson said the sailor's story was one Australia could learn from.

"I would say to all Australians as we live through the most significant adversity in our lifetimes, approaching the 75th anniversary of the Second World War, let Teddy Sheean inspire us to be a people that are selfless, caring and brave."

Ordinary Seaman Teddy Sheean VC. After decades of debate: this is a Victoria Cross for the people. A Tasmanian hero, an Australian hero and a hero of the Royal Australian Navy. Thank you for your service. Lest we forget. pic.twitter.com/FILOMPyM4g

The announcement by the Prime Minister that Teddy Sheean has been recommended for a Victoria Cross for Australia is recognition of extraordinary and selfless acts of valour by a young Australian in defence of his country and his mates. Lest we forget. pic.twitter.com/dmcXd7pgpK

Mr Sheean has previously been memorialised in a painting at the Australian War Memorial and in 1999 had a Collins Class submarine named in his honour.

He is the only ordinary sailor to have a vessel in the Royal Australian Navy bear his name. There have been previous, unsuccessful attempts at awarding Mr Sheean a VC.

In 2013, an inquiry found Mr Sheean's action's "did not reach the particularly high standard required for recommendation of a VC", a move subsequently followed by the United Kingdom's Ministry of Defence who refused to consider him for the prestigious commendation in 2017.

Mr Morrison called Mr Sheean's snub a "substantial injustice in the original decision-making period in 1942 to 1943".