Young Australian farmers have travelled to Paris to learn how to best protect the future of food at home and abroad.

Two of Australia's emerging young farmers have travelled to the climate conference in Paris to learn more about what the future holds for farming and food security.

Anika Molesworth and Joshua Gilbert crowd-funded their trip to Paris to learn more about advancements in the agricultural industry.

For Miss Molesworth's family in Broken Hill, in far western New South Wales, the effects of drought have been felt for more than a decade.

"My family purchased the property in 2000, at the start of the decade long drought, which is not the best time to be buying a sheep station," she told SBS News. 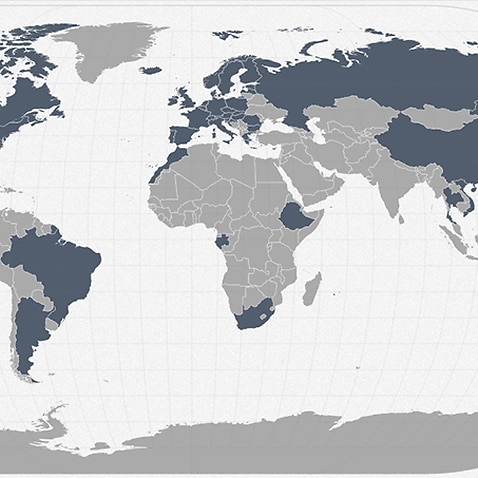 For the first few hot, dry, years the Molesworths had to destock their 10,000 acre property entirely, selling more than 600 merino sheep and hereford cattle.

They eventually restocked with dorper sheep, an African breed known for its resilience to dry conditions.

The Young Australian Farmer of the Year said she learnt a lot over those years and knows more changes are coming.

"You really saw just how the environment is changing and then looking at the projections, that it's going to became even hotter and drier for that region, it is concerned for people who live and work with the environment, who work off the land," she said.

'Farmers have such a strong affinity to the land, the soil, the water, the climate, the biodiversity. We really live and work with the environment, so we are on the front line of climate change.'

For her, climate change is an issue she feels can be mitigated.

Her family has already installed solar panels which have reduced electricity bills by 70 per cent and windmills pump water to distant troughs.

The variable temperatures and conditions have seen crops traditionally grown in northern Australian move south and to higher altitudes.

"There's also a change in the distribution and prevalence of pests and diseases. So I guess every different farming operation is experiencing unique challenges, and with that, unique opportunities as well," Anika told SBS.

Anika is confident Paris has the potential to change the trajectory of climate change, if global leaders put in place the right emissions reductions strategies.

She wants greater climate action to ensure food security in Australia and nations across the globe that seek our produce.

"We've just passed the 1 degree mark, not enough is being done."

For Anika, the vast Australian landscape is ideal for embracing renewable technologies such as wind and solar power. She wants better governance, education and incentives to help farmers transition away from using fossil fuels which contribute to greenhouse gas emissions.

For Mr Gilbert, the effects of climate change go beyond the impact on his family's 50 head of braford cattle.

The 24 year old is of Indigenous heritage, and the Nabiac property in the New South Wales far east sits on his ancestors' land.

But they had to take action to prevent further damage caused from changing conditions.

The family has planted trees to replace those previously chopped down and has undertaken erosion prevention methods around the river. They're continuing to look for new ways to further protect their land.

'My elders...they talk about the changes that they've seen and when they start talking about climate change, it's hard not to listen.'

"Having a 'green farm' is something that we're aspiring to, our motto is that we need to be not only farming for 40,000 years today, but we also need our descendants to look back and say there were decisions made 40,000 years ago that have enabled us to do it for 80,000 years," Mr GIlbert said.

The pair hope they can share their experience with other farmers attending the climate talks.

Miss Molesworth said COP21's 'Farmer's Day' was a real eye-opener to what's going on in other parts of the world, such as Kenya. "These people have zero adaptive capacity and they're experiencing drought, and then floods," she said.

"Developing countries have less of that."

He is also a climate change coordinator for the east African community and knows he is not alone in suffering the effects of climate change.

Agriculture is one of Kenya's biggest industries, both small scale and mass production, but delays in rainfall onset during their wet seasons has posed a major risk to the economy.

"In the seasons when famers have already prepared the land for cultivating, and they've even put the seeds in the soil, and then the rain is delayed, there's an impact in the sense that germination doesn't occur, and most of these seeds end up actually going to waste," Mr Otiende told SBS News.

But not enough rain is just as bad as too much and unpredictable weather patterns have seen heavy rainfall lead to flooding and severe crop damage.

'Most of our agricultural practices are rain-fed.'

The health of citizens is also a grave concern with the inconsistent quality of water causing yield shortages and flow on consequences.

"Because when the crop has been harvested and actually the rain has come before the crop has been taken from the field, then the moisture is reabsorbed back into the crops and then there's also a problem when it comes to necessary conditions to dry the crop."

The high humidity contaminates the crops with toxins and bacteria making it dangerous to consume.

A lack of education means many rural communities cannot detect the dangers.

"It does not go through any testing and screening and they use it as food," Mr Otiende said.

"So most end up consuming food that is unfit for human consumption."

This has led to food scarcity in some regions. Where once farmers used to take surplus harvest to market for meagre profit to fund basic needs, now they can't," Mr Otiende said.

"With low productivity, it also means the income level at households declines and therefore other human necessities and basic needs cannot be met," he said.

Mr Otiende said the Kenyan government was trying to find sustainable ways to maintain agricultural practices, but it was a work in progress.

He said he hoped adaptive policies were not far away.

Sarah Abo's trip to Paris was supported by the World Meteorological Organisation.