The NSW Rural Fire Service has refuted the claims of a former volunteer who said he was let go after he told the prime minister to "get f**ked" while on duty.

A volunteer firefighter whose expletive-ridden attack on Prime Minister Scott Morrison went viral maintains he was taken off duty as a result of the rant, but the New South Wales Rural Fire Service has repeatedly denied he was dismissed.

The NSW RFS is aware of reports concerning the status of volunteer member Paul Parker from the Nelligen area.
We can confirm Paul remains a member of the NSW RFS and has not been dismissed. #NSWRFS

Appearing on Channel 10's The Project on Sunday night, Paul Parker from Nelligen on the NSW South Coast said he was told he was "finished" with the service because of his "allegations and foul language against the prime minister of this country".

Footage of an exhausted Mr Parker, broadcast on 4 January, showed him shouting from the side of an NSW RFS truck as he battled blazes near his home.

"You're finished because of your allegations and foul language against the prime minister of the country while representing the RFS." Firefighter Paul Parker from Nelligen sacked from RFS. #TheProjectTV #auspol #AustralianFires pic.twitter.com/cBevXZRjzi

"Are you from the media? Tell the Prime Minister to go and get f**ked from Nelligen. We really enjoy doing this f**khead," he said, in response to Mr Morrison's comments that volunteer firefighters "want to be out there defending their communities".

On Monday, however, an NSW RFS spokesperson confirmed that Mr Parker remained a member of the volunteer service, after previously stating he was on mental health leave.

Speaking to SBS News following the NSW RFS statement, Mr Parker reiterated his belief that he was "stood down" and said he had not been contacted by the service since the incident.

"They've never been to see me or reinstate me. They're saying that I'm welcome back anytime, but no one has ever told me that," he said.

"They're trying to back-peddle big time ... the whole thing was a big mess and it got messier."

Mr Parker said he has joined with a number of local farmers from the Nelligen area to start a new community fire brigade, which has no affiliation with the NSW RFS.

"The local community has decided to put their own brigade together, and I am obviously a part of it," he said.

"I don't want anything out of the RFS. An apology would be nice, but I won't get that."

The West Nelligen Community Brigade was conceived to address a "total lack of resources in a catastrophic situation", Mr Parker said. Despite the NSW RFS's statement that Mr Parker is free to rejoin the brigade, he said he has no desire to do so.

On Monday morning, the hashtag #IStandWithFiremanPaul was trending on Twitter in Australia, with social media users throwing their support behind the "heroic fireman".

As the controversy continued the prime minister weighed into the debate, telling reporters Mr Parker's comments about him were no reason to be fired.

"Of course he shouldn't, but the RFS has confirmed that he wasn't and I'm pleased about that," he said.

"I understand Paul was feeling incredibly exhausted, and incredibly drained by those events and he was working his tail off defending his community."

He also said that the comments that sparked Mr Parker's rant were misreported. 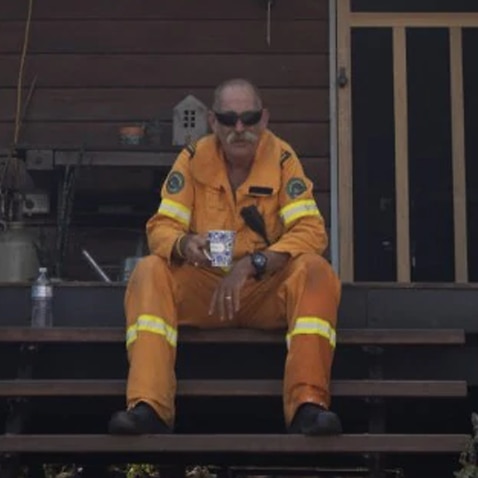 A GoFundMe campaign was set up by Mr Parker's neighbours in January after his home suffered "extensive damage" while they said he spent "countless days fighting the fires in his town".

People from all over Australia have also been donating money to Mr Parker's local pub, the Steampacket, on his behalf so the local hero can drink for free.

"People have been ringing in as well, from as far away as Queensland, putting money on the tab for Paul Parker ... if that's not the ultimate pub test, I don't know what is," he said in an address to Parliament.

"This government has a serious problem of its own making."