It's been five years since IS stormed the ethnic Yazidi communities in northern Iraq, massacring and enslaving thousands, with many survivors still wondering what happened to their loved ones.

Yazidi refugee Nihad Barakat says her new life in the sunny Queensland town of Toowoomba is “beautiful”, but there is an important thing missing.

“We don’t know anything about [what happened to them],” she told SBS News, speaking about her brothers and cousins who were taken by IS during the attack on the Yazidi community of Sinjar in north-western Iraq.

“I want my family to come to Australia and to live together and to be safe in Australia … I want the Australian government to help us, because if they don’t help us, we can’t do anything.”

Forced to flee Iraq after being captured and forced into sex slavery by IS in 2015, the 20-year-old was granted an Australian humanitarian visa last year. But it meant leaving her parents, her young son, who was born in IS captivity, many of her 17 siblings and a lot of unanswered questions behind. Nihad Barakat al-Awsi with a picture of her mother, who is still living in Iraq.
Stefan Armbruster/SBS News

“My mother is in Iraq and I miss her,” Ms Barakat, who lives with two of her brothers and her sister, said.

“She misses us very much and she wants to come to Australia.”

Speaking to SBS News from her home on the five year anniversary of the day IS swarmed her community, massacring men, women and children, Ms Barakat described 3 August as a “black day”.

“When IS came we were very sad, because IS killed the children, men and women,” she said.

"The hardest thing was hearing my younger sister being raped by IS." Exclusive: Yazidi boy forced to fight with IS could be reunited with family in Australia

Toowoomba, located in regional south-east Queensland, is home Australia’s largest Yazidi community after the UN and Australian government declared that the treatment the ethnic minority suffered at the hands of IS was attempted genocide.

The Yazidi people follow a unique religion that incorporates elements of Islam and Christianity, making them a target for the fundamentalist Islamic terror group.

Estimates put the number of Yazidi people killed or kidnapped in the days following 3 August, 2014 at approximately 10,000.

On Saturday afternoon, the 800-strong Yazidi community in Toowoomba marked the anniversary by hosting an official commemoration ceremony, where Ms Barakat took to the stage to share her harrowing story. "Today we are all coming together to learn about what happened five years ago today and share in the pain and trauma and show our respect - they are a part of our community now and we want to be there for them."

Toowoomba's mayor Paul Antonio, who also attended the memorial event, said it was a "very sad day" but offered a message of hope for the town's newest residents. "What's happened to these people is almost unspeakable," he said.

"But here is a brand new start for the Yazidi people who are here in Toowoomba."

While Ms Barakat is now free to build a new life and follow her dream of becoming a teacher, the memory of those still under IS control - including her son, Issa - remains strong.

“I remember everything. It is so hard. A very sad day," she said.

‘This is my country’

Despite the sadness surrounding the day, at least one Yazidi refugee in Toowoomba has a smile on his face.

Two days ago, Jankey Joweesh moved into his new home - making him the first new refugee in Toowoomba to purchase his own property.

Mr Joweesh was originally from Syria but fled to northern Iraq when the war started in 2011. In his home village, he said his family owned nearly 2500 olive trees which, he said, are “very important for Kurdish people”. 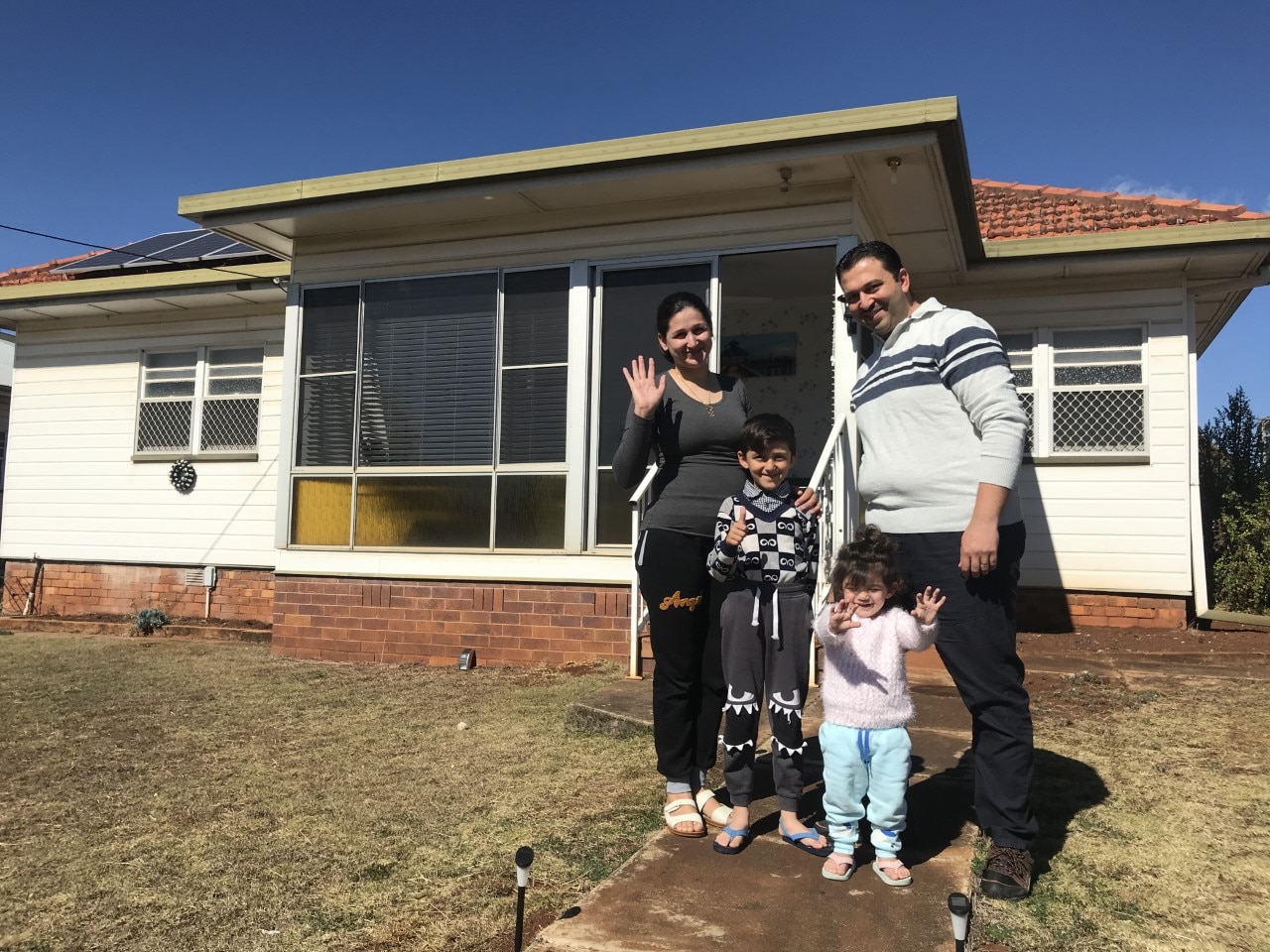 Jankey Joweesh with his family in front of their new home in Toowoomba.
Stefan Armbruster/SBS News

As IS moved throughout the region, he and his young family were offered residency in Australia, arriving in July 2017.

“I am very happy in Australia, and Australia is the first country for me, because I lived here, this is my country for my kids, I am buying a home,” he told SBS News. Mr Joweesh, an electrical engineer by trade, now works in a local ice cream factory and said he loves his job.

The joys of property ownership were not enough to entirely erase the pain of the anniversary, however, as Mr Joweesh reflected on what he also called “a black day”. “All the Yazidi people are refugees to another country,” he said, explaining how his community is now spread throughout refugee camps in Iraq, Turkey, Syria and Iran.

“The Yazidi don’t have a country, no food, no drinking, we need more help please.”