The share of foreign property buyers in Australia continues to fall, so is that a good or bad thing?

A few years ago, Victoria was a hot market for foreign investors.

At its peak, one in three purchases of new property in the state were from overseas buyers. Now it is one in seven, according to NAB's latest Residential Property Survey.

In NSW they peaked at one in five, falling today to one in 20.

"Part of that is the cycle, in other words, there's a limit to the number of apartments they can build," NAB chief economist Alan Oster told SBS News.

"In some of the foreign governments, particularly in China, they're starting to crack down in terms of getting money out and ultimately some of the governments have increased some of the imposts to foreign investors, but at the end of the day, I think it's a combination of all those factors."

Nationally, the share of foreign buyers for new homes dropped to a six-year low of 8.4 per cent, while in the established housing market it has declined to 5.5 per cent, a five-year low. 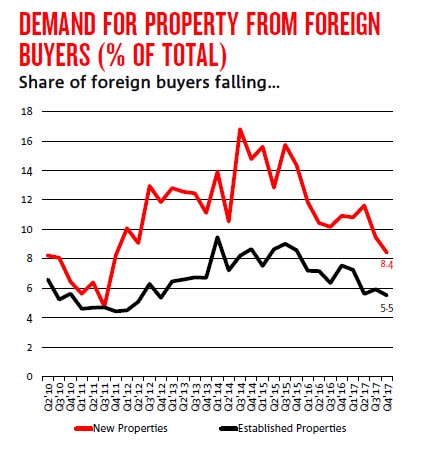 "I think it's good in the sense that you don't want foreign investors driving markets to silly levels, we think in the apartment markets there's already an oversupply - particularly in CBDs of Sydney, Melbourne and Brisbane," Mr Oster said.

First-home buyer owner-occupiers though are back in the market, forming 28.8 per cent of all new property sales - that is the highest since NAB started recording the data.

Australia's housing boom is almost over

"I think the key fact is that there are less investors out there because of what the regulators have done, there's less foreigners, interest rates are lower if you're a first home owner doing variable," Mr Oster said.

"And I think the other thing that is important is in the last six months is that there has been some changes in stamp duty incentives for first-home owners."

While the number of first-home buyers purchasing an investment home has fallen to 9.9 per cent, it suggests many are buying a home to live in first, instead of making an investment. Overall, NAB expects a moderation in overall house prices, especially in Sydney, with apartments to underperfrom.

It sees the houses in Hobart as the best performers this year, rising 4.9 per cent, followed by Melbourne with 3.7 per cent growth. Sydney's the worst, with declines of 2.4 per cent expected in 2018.

In 2019, Melbourne is forecast to see top growth around the country, while the falls in Sydney house values continues. 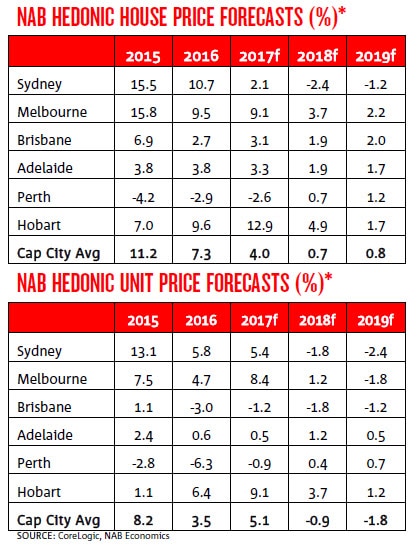 Apartment prices in Sydney and Brisbane are tipped to decline marginally in 2018 and 2019.