Security and propaganda experts say the focus of the US election on 3 November shouldn't just be on foreign actors, but on those spreading dangerous misinformation closer to home - and how bad actors are exploiting a volatile country.

For American political scientist Jennifer Hunt, one of the most devastating outcomes of the past four years has been the loss of friends and family members because of political differences.

“I have never felt so divided from people that I would consider very close,” the Australia-based academic tells SBS News. “There are people in my family whom I will probably never talk to again.”

But Dr Hunt, a US national security expert, says she’s not alone.

“Most people in the United States have lost friends or family over the last four years due to political rancour and policy issues and decisions that are very personal," she says. After Russia interfered in the 2016 US presidential election in an effort to harm Hillary Clinton's campaign, bad actors are back ahead of the 3 November poll.

The FBI has warned Russia (again) and Iran have tried to interfere with this year's election.

But while overseas efforts can wreak havoc, there are calls for the focus to be on the misinformation being spread closer to home - and how foreign meddlers are taking advantage of that.

With its fractured and divided populace, a thriving market for conspiracy, and a voter base increasingly cynical of the democratic system, the US appears ripe for the picking.

'Gasoline is out there. It just needs a match'

Michael Edison Hayden, a senior investigative reporter for the Southern Poverty Law Center, says while foreign actors are a major threat, the US produces more disinformation than “almost any country you can imagine, for ourselves”.

“It's not a foreign country doing it to us,” Mr Hayden tells SBS News from New York. Facebook and Instagram ads linked to a Russian effort to disrupt the American political process in 2016.
AP

“If they're not, then they're just salacious sensational stories that cause people to feel hate and to feel angry,” he says.

“If bad actors - be they foreign or domestic - want to light a match, the gasoline is already out there." A recent Harvard University study found it's not social media disinformation nor Russian interference operations behind the false narrative that “mail-in voter fraud” is widespread. It's the mainstream media, in its earnest attempt at "balanced" reporting.

Another reason why foreign bad actors don’t need to do much more to peddle misinformation - false information that is spread regardless of its intent to mislead - is because, as some experts say, the man in the White House is already doing it for them.

The Harvard study found US President Donald Trump and other public figures were key to fuelling the disinformation campaign behind mail-in votes. 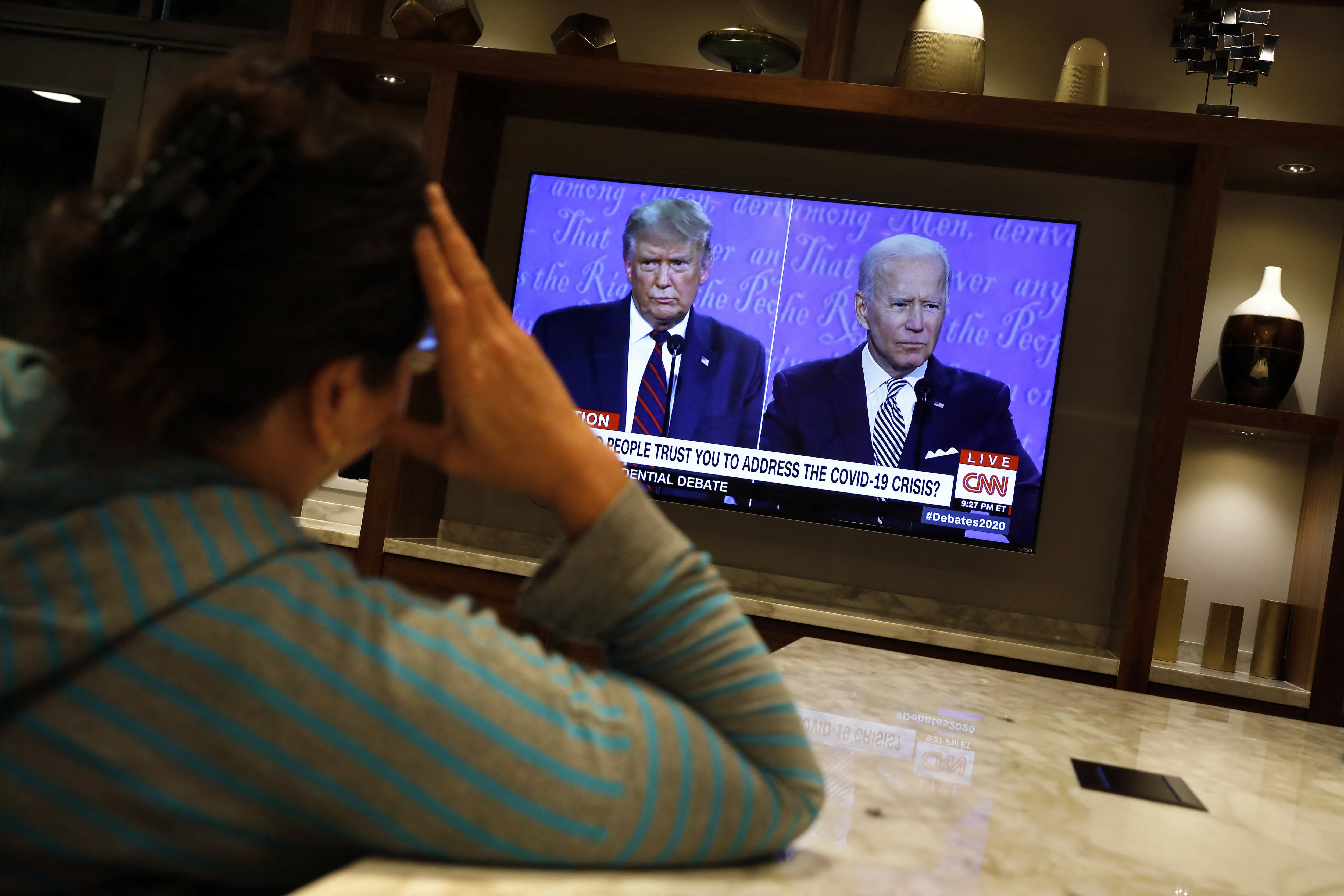 A separate study from Cornell University also found Mr Trump has been the world's biggest driver of COVID-19 misinformation during the pandemic.

“We actually don't need foreign interference in the United States for those [disruption narratives] to continue and to gain further momentum, when they're popularised by public officials,” Dr Hunt says.

“For instance, Donald Trump has talked about voter fraud ad nauseam since 2016 - that was the number one narrative that was … pushed by Russian operatives in 2016.”

Adding fuel to the fire is the rise of movements such as QAnon, a baseless conspiracy which claims Mr Trump has been elected to tackle a global cabal of child sex predators.

Several victims of the conspiracy theory have spoken about how the movement is dividing families and friends, and tearing their communities apart.

A Q sign at a Trump rally in Pennsylvania in 2018.
Getty

“I'm more of the mind that QAnon is pervasive enough to be a substantial problem, not only for the election but beyond that,” Mr Hayden says.

“QAnon is really about this idea that if you're my friend, you're with ‘the leader’. And if you're not with the leader, you're my enemy and you're a pedophile.

“It's a very dangerous proposition. And, again, Russia doesn't have to do this to us. We're very capable of doing it to ourselves.”

Russia doesn't have to do this to us. We're very capable of doing it to ourselves. Mr Hayden’s latest work has been on a far-right American politics blog and its links to a pro-Kremlin propaganda website.

The American blog is aimed at “creating a sense of instability and fear in the public”, Mr Hayden says, by targeting voters in the swing state of Pennsylvania with pieces on the Black Lives Matter movement and Antifa demonstrators.

But the site is just one example of how domestic actors are spreading disinformation - and a foreign actor potentially taking advantage of that.

“Russia doesn't have to come into our country, and do everything," Mr Hayden says. "It's not like we're just sitting around all innocent - this country has been producing a lot of disinformation and propaganda for a very, very long time. And that makes us very vulnerable to people who want to manipulate [us] in one direction or another.”

But just because domestic influence operations are more active this election it doesn't mean foreign bad actors have disappeared - as the warnings from the FBI have shown.

Bret Schafer, who tracks foreign disinformation operations for the Alliance for Securing Democracy, says the potential for foreign interference shouldn't be dismissed.

"I look at Russia’s promotion of divisive content as a kind of gateway drug – they pull in followers by pushing out narratives meant to resonate with the target audience and then use that platform to try to shape or manipulate public opinion on a range of issues.

"We would be just as divided with or without Russian manipulation, but that doesn’t mean that Russia [or others] can’t wreak havoc in the election through a range of activities, including but not limited to, hack and leak operations."

Dr Hunt, who's been tracking misinformation during the pandemic, says Russian operations never really died down.

"I would say the interference never stopped ... The 2020 efforts are just a continuum and refinement of strategies that worked well in 2016 and continue to work."

The proliferation of fake news and misinformation, targeting and manipulating liberal and conservative voters, and trying to suppress voter turnout are their tried and tested tactics. But those strategies have evolved.

With a country in a heightened state of alert for interference, and US intelligence agencies and social media networks now actively tracking bad actors, Russian operations have been forced to change tactics.

In the lead up to the 3 November vote, at least two interference operations have been discovered, posing as independent US news sites to spread misinformation and sow discord among both sides of the political divide. One of the fake news sites, ‘Peace Data’, was found to be attempting to reduce support for Democratic presidential challenger Joe Biden and his running mate Kamala Harris among left-leaning voters.

The right-leaning ‘NAEBC’ sought to do the same, but among conservative voters.

They shared an important characteristic: the sites recruited unsuspecting real Americans to write for them. The journalists and writers had no idea they were pawns in a Russian disinformation campaign.

Both websites were linked to the same Russian troll farm that meddled in the 2016 election, the Internet Research Agency.

Mr Warren says these Russian operations have been forced to change strategy because this time around, the social media giants have been more active in finding and taking down accounts linked to interference campaigns.

This is part of our standard process to reduce the spread of misinformation. We temporarily reduce distribution pending fact-checker review. https://t.co/vf3CBvLmjj

“The Internet Research Agency has realised, ‘Okay, we're not being successful because our fake accounts or our bots that have been identified’, and what they're doing is using bonafide journalists, or political advocates to spread the news on their behalf to make it look as if it's a legitimate news story,” he says.

“So it means there's still the botnets happening [a number of internet-connected devices], in terms of Twitter for instance - spreading a lot of fake news, fake information.

"But what they're doing is realising that that isn't going to be enough to swing opinion, what they need to do is to get bonafide journalists, or respected politicians to advocate that point of view as well. So what you have is you want someone who's respected, you know, he’s made that statement and is more likely to be accepted by them, the greater community.”

According to tech giants and US intelligence agencies, Russia is being joined by other foreign governments with an axe to grind or have vested interests in the US.

“We're now seeing three threat actors … Russia is being pro-Trump, and we're seeing China and Iran being anti-Trump," Mr Warren says. “What you see is foreign interference to an extent that we've never seen before."

In August, the director of the National Counterintelligence and Security Center, William Evanina, warned Russia was “using a range of measures” to denigrate Mr Biden and harm his chances at the presidency.

He also said a relatively more pro-Biden China was trying to “shape policy” and pressure US political figures.

Iran, meanwhile, was seeking to divide the US and spread misinformation on social media.

The FBI has now expanded on the extent of those operations, saying both Russia and Iran were interfering after obtaining voter registration information.

Separately, Microsoft has also issued its own warning, saying operations in Russia, Iran and China were targeting people from both the Trump and Biden campaigns.

Mr Hayden says the overall aim of these 'bad actor' interference operations is to create instability, undermine voter confidence in the system, and suppress turnout on polling day.

“One technique that they've tried to push is to kind of quash turnout or slow turnout down on that [left] side and kind of energise turnout on the far right or, you know, conservative base.

“But more than anything else the tactic seems to be to create instability and chaos which has an effect of, you know, causing people not to vote generally.” 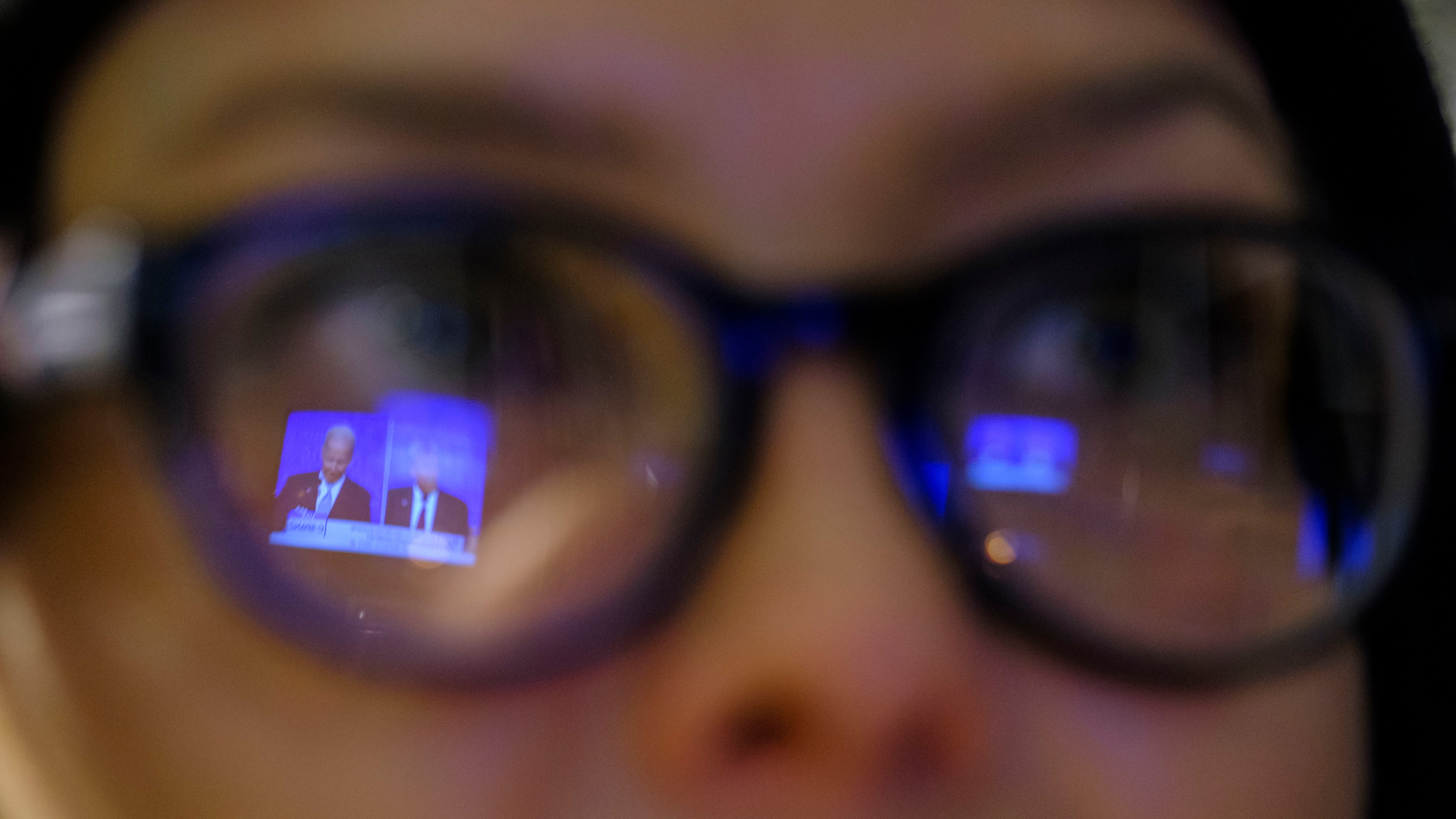 Mr Schafer is less worried about attempts to influence the election than the attempts to discredit it altogether.

"Obviously, that effort would take place after the election, so we really won’t know if they have a new play until after 3 November."

Dr Hunt is also worried about the impact of disinformation operations on the vote itself.

"We've got a lot of strategies around disinformation, division and disenfranchisement, and I think what's really on the ballot in November is democracy." FBI chief warns of Russian interference in US election, with Joe Biden the primary target

She's also concerned about how effective the campaign against mail-in votes will be.

“I think the President has made sure that there is a segment of the population that will not accept the result unless he wins," she says.

It's a concern shared by Mr Hayden.

“It is a situation that could spin into a very dark direction,” he says.

The Feed 59 mins ago