Flood warnings are in place as Sydney prepares to receive up to 300mm of rainfall by Sunday. Other parts of the state have seen 280mm of rain in the past 24 hours alone.

Heavy rain across much of NSW is "breaking the back" of the state's horror bushfire season but also keeping emergency services busy with flooding along the coast.

The Bureau of Meteorology warns torrential rain of up to 200mm is possible overnight in the state's central coastal area including greater Sydney, the Central Coast, Illawarra, Southern Highlands and Blue Mountains.

This could cause "potentially life-threatening" flash flooding and commuters are advised to delay non-essential travel in those areas, the bureau says.

Heavy rain is set to continue across our network tonight and into the weekend.

Stay safe in the wet - remember if you see fallen powerlines always assume they’re live, stay at least 8metres away and call Ausgrid on 131388.

Up to 300 millimetres has been recorded in some parts of the north coast with similar totals expected in the Sydney basin by the end of the weekend.

The equipment has been repaired but Transport for NSW advised commuters to keep allowing extra travel time as major delays continued.

BOM acting NSW manager Jane Golding says rain could cause roads to be flooded in the city, but much less will fall in the state's drought-ravaged west.

"The bulk of the rain does look like it will affect the coastal ranges and the eastern side of the divide," Ms Golding told reporters on Friday.

The NSW State Emergency Service has responded to 683 jobs across the state since the wet weather arrived on Wednesday.

If you see flooding, please do not attempt to drive, ride or walk through it. pic.twitter.com/y6bIZJdM9D

In the northern rivers region, a car was washed off a road in Glenreagh, and in Tyagarah two people had to be rescued from a caravan due to rising floodwaters.

"Most of the damage so far is the leaking roofs, damaged properties, fallen trees and stranded motorists, some of whom have attempted to drive through flooded areas," SES commissioner Carlene York said on Friday. 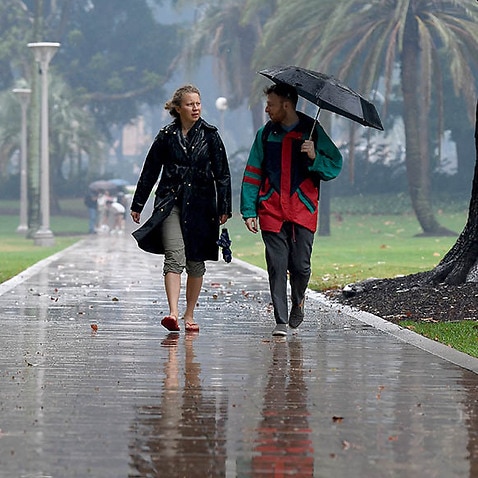 The SES will be moving resources down into the Illawarra and the South Coast over the weekend as the weather system moves south.

"The fire damaged areas will bring extra risks as the heavy water and floods move through (with) more likelihood of fallen trees and more run-off," Ms York said.

NSW Rural Fire Service commissioner Shane Fitzsimmons says the rain is "breaking the back" of the horror bushfire season.

"The rain is good for business and farms as well as being really good for quenching some of these fires we've been dealing with for many, many months," the commissioner told ABC TV on Friday.

"We don't want to see lots of widespread damage and disruption from flooding, but it is certainly a welcome change to the relentless campaign of hot, dry weather."

There are currently 38 fires burning across NSW. 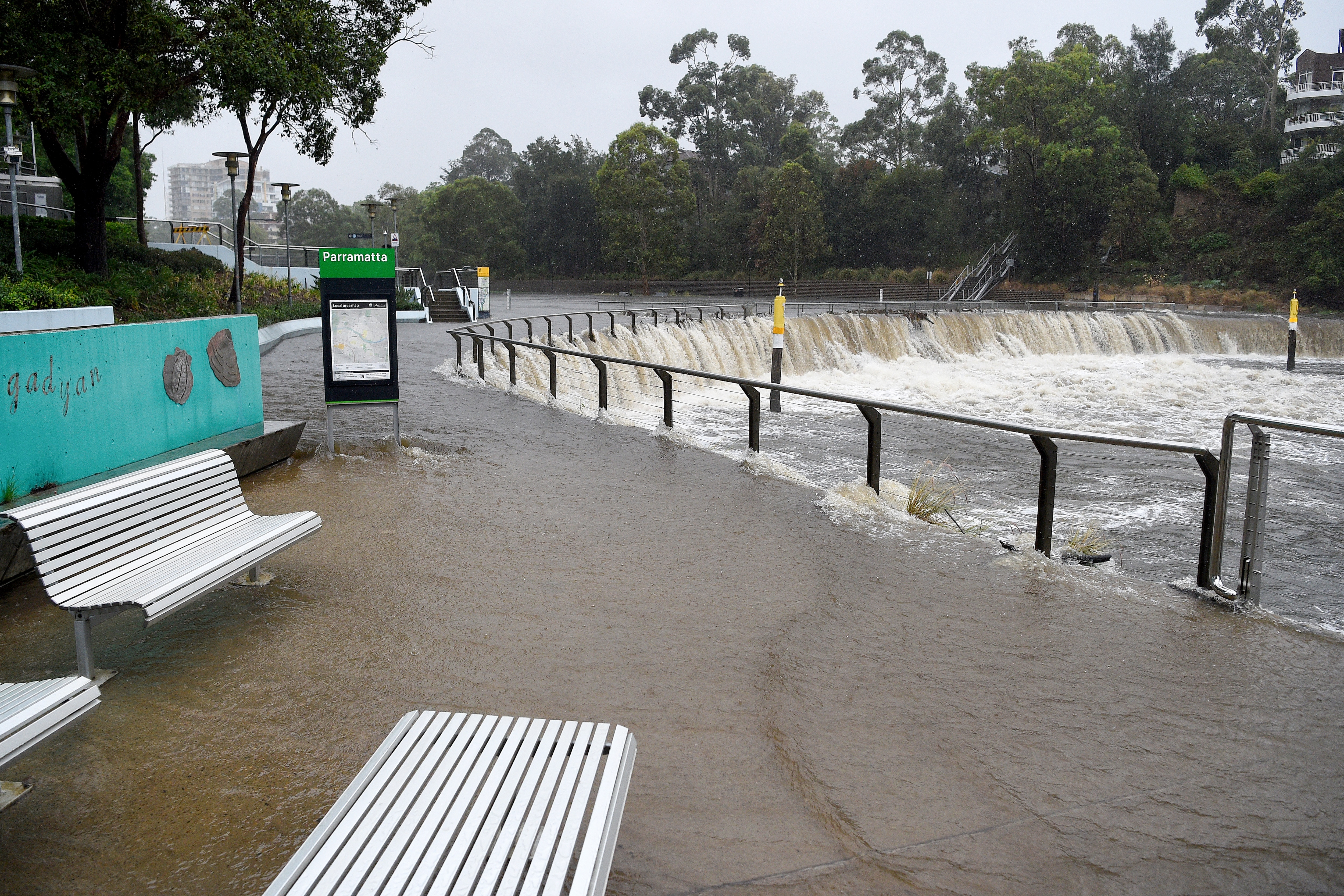 The Bureau of Meteorology on Friday issued a severe weather warning for heavy rainfall, damaging winds, abnormally high tides and damaging surf, stretching along the coast from the Northern Rivers to South Coast regions.

The #NSWRFS State Operations Centre has had a significant shift in focus today from fires to floods. The @NSWSES will be utilising our Centre over coming days to manage incidents due to the current weather event. We continue to manage more than 40 fires burning across #NSW. https://t.co/QhNPAWCWix Soggy streets greated commuters as they travelled through inner-Sydney.
AAP

Wind warnings have been issued for the Hunter coast, Macquarie coast, Sydney coast and Ilawarra coast, while minor flood warnings are in place for the Bellinger, Kalang, Orara and Paroo rivers.

#FRNSW Strike Team Zulu, a flood rescue unit that has been deployed to Bellingen are assisting the SES with flooding in the area and ensuring the local community are aware of any risks.

If you see flooding, please do not attempt to drive, ride or walk through it. #NSWFloods pic.twitter.com/pVdDhcqV1s

Parts of the North West Slopes and Plains and Northern Tablelands regions are also subject to a severe thunderstorm warning.

Videos and photos of heavy rain falling have been posted online by residents.

And the lord said "let bender walk in the rain" #sydneyrain --- not sure this 16 year old cares to be out here pic.twitter.com/MwT2xRXY9y

One resident said the deluge was enough to fill their rainwater tank "10 times over".

Lots of rain in #Sydney. My new water tank is overflowing. When I installed it I thought it might take a long time to fill. With the forecast rain it could fill ten times over. #sydneyweather pic.twitter.com/mGIzizCEkZ

Semi-conscious throughout the night to the loud drops of rain falling on the roof & the plants outside our bedroom & now listening to it still falling upon slow awaking is lovely. #rain #atlast #Sydney #ClimateActionNow

Sydney up the Hunter to Tamworth yesterday then down to Orange. Good rain between Singleton and Scone, then again between Gunnedah and Dunedoo, the rest modest. Orange to Molong then Bathurst and home today, hopefully wet all the way. pic.twitter.com/0eFaCYG5ca