The outspoken media personality condemned the violence at one of his events overnight in Melbourne and urged the Australian alt-right to become more effective activists.

Alt-right media personality Mio Yiannopoulos has told an audience at Parliament House to resist immigration from Islamic nations and urged his supporters to mobilise against the political left.

The outspoken commentator was invited to Parliament by independent libertarian Senator David Leyonhjelm – an outspoken supporter of free speech and opponent of racial vilification laws.

Also in the crowd were a number of One Nation senators, including leader Pauline Hanson, and Coalition backbencher George Christensen. 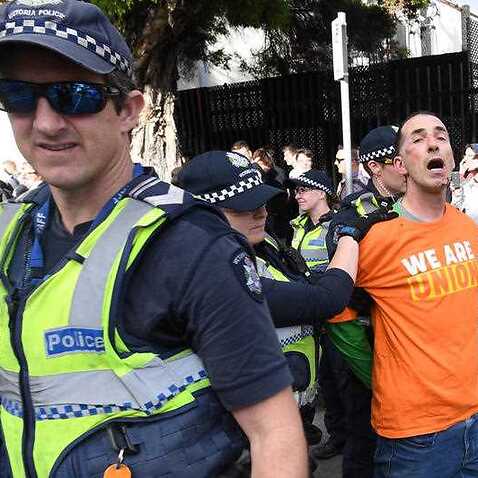 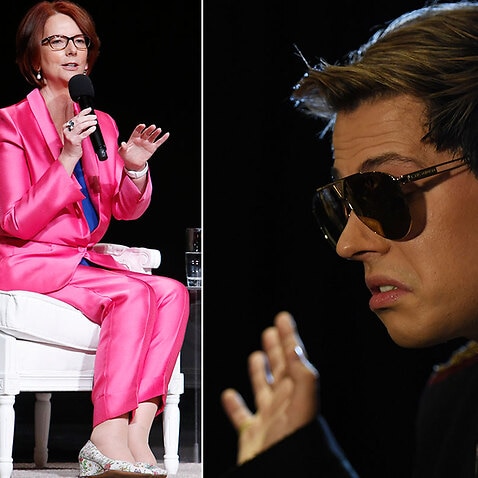 Last night protesters from right-wing and left-wing groups clashed violently outside one of Mr Yiannopoulos' events in Melbourne.

Police used pepper spray to break up the altercation.

Mr Yiannopoulos condemned the violence, which he blamed entirely on the left-wing group.

"They will beat you in the street if they can," he said.

"If the left can't persuade, it will turn to violence."

"I'm not suggesting that you should return the favour violently," he said.

Instead the speaker urged the Australian alt-right to work on inserting their political philosophy into "TV studios, parliament, in the pages of your newspapers".

The influential commentator and former Breitbart writer said he was not familiar with Australian groups, but distanced himself from "white supremacist losers".

He stressed he supported anti-immigration movements but not white supremacists.

"The advice is - don't be scared by allegations of racism, but by the same token, don't be a racist," he said.

"Most people don't want massive unskilled immigration from the Middle East, almost nobody does."

Mr Yiannopoulos said Muslims who immigrated to Australian should integrate with broader national culture and criticised the religion for "regressive" views on gay and women's rights.

"I'm not comfortable with the horrifyingly regressive social attitudes of Muslims in the west," he said.

'We don't believe the ABC'

In a wide-ranging address that included questions from the audience, Mr Yiannopoulos railed against the "establishment elites" and "language policing".

He also said there was "no place left for an organised feminist movement" because feminism had already "won" on all its key objectives.

Labor and the Greens passed a Senate motion earlier in the week to "condemn" Milo Yiannopoulos' visit.

The motion also called on the Senate president to revoke his permission to speak at Parliament House, but no such action was taken.

Liberal senator Jane Hume said the controversial speaker ought to be ignored.

"I mean, with someone that is an attention seeker, you simply ignore them," she told reporters in Canberra on Tuesday morning.

"You turn the volume down."

Mr Yiannopoulos's speeches on university campuses in the US have sparked violent protests and he was banned from Twitter last year after he was blamed for directing racist abuse at Ghostbusters star Leslie Jones.