According to scientists, the Pizol glacier in eastern Switzerland has lost at least 80 per cent of its volume since 2006.

Dozens of people dressed in black went on a "funeral march" up a steep Swiss mountainside on Sunday to mark the disappearance of an Alpine glacier amid growing global alarm over climate change.

Around 250 people including children joined the solemn two-hour climb up the side of Pizol mountain in northeastern Switzerland to the foot of the rapidly melting ice formation, situated at an altitude of around 2,700 metres near the Liechtenstein and Austrian borders. People in black clothing attend a commemoration for the dying glacier of Pizol mountain, in Wangs, Switzerland.
KEYSTONE

"We're here to bid farewell to Pizol," Swiss glaciologist Matthias Huss said in a sombre speech after arriving at the glacier, one of the most studied in the Alps.

Eric Petrini, the chaplain of the Mels municipality where Pizol is located, called on "God's help to tackle the enormous challenge of climate change".

The speeches were accompanied by the mournful tones of alphorns - a 3.6 metre, pipe-shaped wooden instrument. Some marchers also laid down flowers for the glacier.

Pizol "has lost so much substance that from a scientific perspective it is no longer a glacier," Alessandra Degiacomi, of the Swiss Association for Climate Protection, told AFP ahead of the event. People take part in a ceremony to mark the 'death' of the Pizol glacier.
AFP

It came after Iceland made global headlines last month with a large ceremony and the laying of a bronze plaque to commemorate Okjokull, the island's first glacier lost to climate change.

But unlike Iceland, Sunday's ceremony does not mark the first disappearance of a glacier from the Swiss Alps.

"Since 1850, we estimate that more than 500 Swiss glaciers have completely disappeared, including 50 that were named," glaciologist Huss, who works at the ETH technical university in Zurich, told AFP before the march.

Pizol may not be the first glacier to vanish in Switzerland, but "you could say it is the first to disappear that has been very thoroughly studied."

In deepest sadness, #Switzerland has celebrated a commemoration for#Pizol #Glacier today. A concerted action of Christian &
environmental associations has organised this event with 250 participants, including a speech by our colleague @matthias_huss. R.I.P., Pizolgletscher! pic.twitter.com/7413PIuVoS

The logs kept since scientists began tracking the glacier in 1893 paint a bleak picture of recent rapid changes to the climate.

Pizol, which sits at a relatively low altitude, was never very big.

According to Glacier Monitoring Switzerland, or GLAMOS, it, like nearly 80 percent of Swiss glaciers, has been considered a so-called glacieret.

It has figured among some 4,000 glaciers - vast, ancient reserves of ice - dotted throughout the Alps, providing seasonal water to millions and forming some of Europe's most stunning landscapes.

But Huss and other ETH scientists recently cautioned more than 90 per cent of the Alpine glaciers could disappear by the end of this century if greenhouse gas emissions are not reined in. 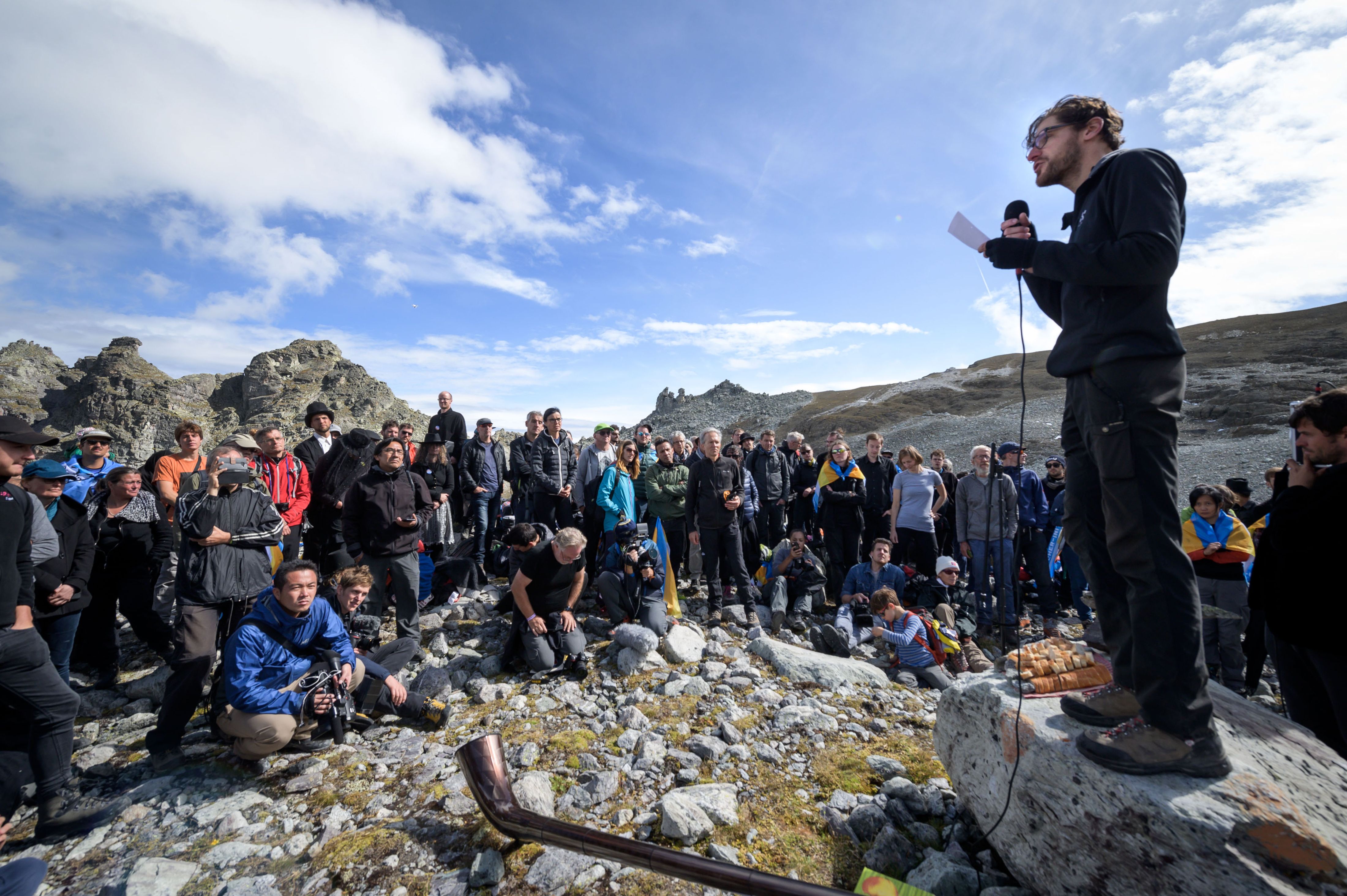 Regardless of what actions humans take now, the Alps will lose at least half of their ice mass by 2100, according to their study, published in April.

And in a subsequent study published earlier this month, the researchers indicated that the Alps' largest glacier, the mighty Aletsch, could completely disappear over the next eight decades. Sunday's "funeral" for Pizol provides an occasion to point out that climate change is not only melting glaciers but is endangering "our means of subsistence", according to the organising groups, including Greenpeace.

It is threatening "human civilisation as we know it in Switzerland and around the world," they warn on the event webpage. Activists sit in front of the Pizol glacier and mountain during a commemoration for the dying glacier of Pizol mountain.
AAP

With this in mind, the Swiss Association for Climate Protection recently presented the 100,000 signatures needed to launch a popular initiative, to be put to a referendum, demanding that Switzerland reduce its net greenhouse gas emissions to zero by 2050.

The date for the vote has yet to be set, but the Swiss government in August said it supported the objective.