The defamation trial brought by actor Geoffrey Rush against the Daily Telegraph newspaper has started in a Sydney court before a judge alone.

Geoffrey Rush was a "national living treasure" who gave pleasure to millions and had no scandal to his name before a Sydney newspaper published articles that destroyed the actor's reputation, a judge has been told.

The Oscar-winning actor is suing the Daily Telegraph's publisher Nationwide News and journalist Jonathon Moran for defamation after they published articles about an allegation he behaved inappropriately towards a female co-star.

Rush sat with his wife in Sydney's Federal Court on Monday as his barrister, Bruce McClintock SC, gave his opening address to Justice Michael Wigney at the start of the defamation trial.

Mr McClintock said that as of November 29, 2017, his now 67-year-old client had had an "extraordinary career" to the point where he could be described as one of Australia's most famous actors. Geoffrey Rush arrives at the Federal Court in Sydney.
AAP

"As well as giving pleasure to millions, his reputation was stellar. It could not have been higher. No scandal attached to his name," Mr McClintock said.

"On the 30th of November, Your Honour, that was all changed because a gossip columnist in the Telegraph decided to write an article about my client."

The Telegraph's 2017 articles referred to an allegation Rush behaved inappropriately towards a fellow actor - later revealed to be Eryn Jean Norvill - during a Sydney Theatre Company production of King Lear in 2015 and 2016.

"This destroyed my client's reputation," Mr McClintock said, pointing to the banner advertisement. 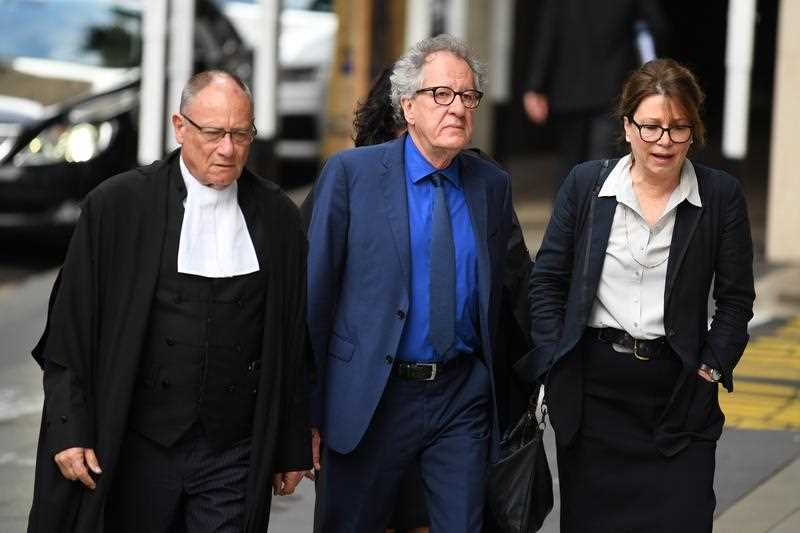 According to a defence document, Rush allegedly made lewd gestures in her direction, simulated fondling and groping her breasts and regularly made comments or jokes about her involving sexual innuendo. What is defamation and where do we draw the line in Australia?

He is accused of touching Norvill's lower back under her shirt when they were backstage and tracing his hand down her torso and across the side of her breast during a scene in which he was carrying her.

Mr McClintock on Monday said Rush denied the accusations against him and would testify he did none of the alleged acts.