Experts have praised Glencore's move to renewable energy as a "positive", but said more could be done to meet environmental issues.

Mining giant Glencore's move to cap its production of coal to meet environmental needs has been praised as a positive step - but experts warn more needs to be done to meet climate change demand.

The company said the move, on Wednesday, to limit coal production and instead prioritise investment in other commodities was part of a transition towards cleaner energy and transportation.

"As one of the world’s largest diversified resource companies, Glencore has a key role to play in enabling transition to a low carbon economy," the company said in a statement on Wednesday, citing climate change as a key reason. "To meet the growing needs of a lower carbon economy, Glencore aims to prioritise its capital investment to grow production of commodities essential to the energy and mobility transition and to limit its coal production capacity broadly to current levels."

Dan Gocher, director of Climate and Environment of the Australisian Centre for Corporate Responsibility (ACCR), said the announcement was a "positive" move towards meeting the Paris Climate Change Agreement.

But warned it was still a "modest" victory - and far more could be done. "It's absolutely positive, but we described it as modest though," Mr Goscher told SBS News.

"They have essentially committed to capping production at existing levels. Given they've got some of the best and biggest reserves in Australia, it probably means they can keep going at that rate for quite some time.

"We would obviously like to see a far more aggressive target."

Mr Gocher said the ACCR would like to see a fall in emissions from coal production made a priority. Glencore has flagged doing just from 2020.

"They have committed to setting a target for 2020 and importantly that includes their scope three emission," he said. 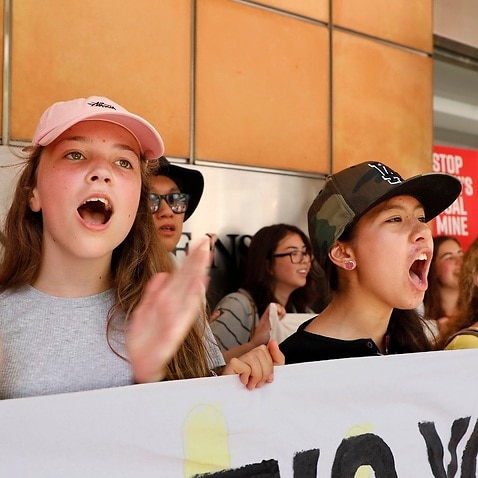 "What that means is by 2020, they will be setting a target that emissions from everything they sell will begin to decline. That is the thing we need to see and that's the difficult thing to get out of companies.

'We've seen similar commitments from BP and Shell, but it's good we are seeing it from Glencore."

Fat Prophets resource analyst David Lennox said the move was a "halfway" step and other companies could look to Rio Tinto as a better example.

"You have to look at our other big miner, Rio Tinto, and they have in fact taken the ultimate step and moved away from coal altogether," he said.

"So one would have to say Glencore's move is perhaps "halfway", which is better than nothing. But certainly a halfway move, Rio Tinto has gone the full way and we are yet to see if our other big miners perhaps look at what both these companies have done."

"This is coal, don't be afraid," he told Labor MPs on the opposite side of the chamber. Then-Treasurer Scott Morrison with a piece of coal during House of Representatives Question Time.
AAP

"Resources Minister Matt Canavan needs to explain how the government is planning for a future beyond coal."

Mr Gocher said the ACCR is lobbying to reduce carbon emissions, but companies are reluctant to stick their necks out because of the political debate around climate change and energy.

"There is clearly a divide between some coal producers, particularly BHP and now Glencore, and the likes of Matt Canavan...on that side of politics," he said.

"(They) see endless growth in the coal market and don't really see that it needs to be wound out of our energy system to meet the Paris agreement."

But the resources minister denies the government is out of step.

"Call me cynical but I think their announcement overnight appears to be more to do with the self-interest of Glencore than the planetary interests of trying to save the climate," Mr Canavan told a press conference at Parliament House.

Switzerland-based Glencore, which also trades commodities, noted that it was well-positioned to support the transition to a lower-carbon economy with a diverse portfolio that includes copper, cobalt, nickel, vanadium and zinc. The metals are important in the production of batteries - the cost and performance of which will likely be key in determining whether electric vehicles displace petrol and diesel vehicles.

Mr Lennox told SBS News that while Glencore capped coal production, they could see big returns in the cobalt and zinc markets.

"So one would have to suggest that perhaps they are taking the good step in limiting their coal production..but they're not going to miss out because they are perhaps going to benefit from the surge towards renewables and the use of storage batteries for electricity."

Glencore said it believes that energy and mobility transformation "is a key part of the global response to the increasing risks posed by climate change".

Coal, a key fuel for electricity production, is a major producer of carbon dioxide (CO2) emissions, a major driver of global warming.

Globally, coal use accounts for 40 per cent of CO2 emissions and is on the rise after declining slightly from 2014 to 2016.

The company said it agreed with international efforts to limit the rise in global temperatures while also ensuring universal access to affordable energy.

The firm also said it "must invest in assets that will be resilient to regulatory, physical and operational risks related to climate change ... to deliver a strong investment case to our shareholders".

It added it was on track with its pledge to reduce greenhouse gas emissions intensity by 5 per cent by 2020 compared to 2016 levels.