Over 10,000 deaths have now been recorded in Italy, Spain announces stricter lockdown measures, and Germany says its repatriated more than 160,000 nationals.

Italy's world-topping coronavirus death toll shot past 10,000 on Saturday and showed few signs of slowing down.

The 889 new fatalities reported by the civil protection service came a day after the nation of 60 million registered a world record 969 deaths on Friday. Its toll from the past three days alone reached 2,520 - higher than the total number of deaths in either the United States or France.

Italians began to experience hope when their daily death and infection rates began to slow on March 22.

The sudden new surge is offset -- if only slightly -- by rare positive news from the pandemic's epicentre in northern Lombardy region around Milan.

"Little by little, they are starting to breathe again."

Spanish Prime Minister Pedro Sanchez has announced stricter lockdown measures that will force all non-essential workers to stay at home for the next two weeks, as the government reported 832 new coronavirus deaths overnight.

The latest moves to combat the virus in Spain, the second-worst affected country in Europe after Italy, will be approved at a cabinet meeting on Sunday and will last from March 30 until April 9.

"This decision allows us to reduce the number of infected people to a much greater extent," Sanchez said in a televised address. Over the next few days Spain would be making a "powerful collective effort", he said, adding that the new measures would have the effect of extending the Easter holidays.

Workers would receive their usual salaries but would have to make up lost hours at a later date, he said.

Sanchez also used the address to urge the European Union to act and called for a "united economic and social strategy".

He urged the EU to issue bonds, saying "we have to mutualise the debt, issue reconstruction bonds to deal with coronavirus".

"We do not understand why the eurozone, which shares a currency, does not share fiscal policy," he said. As Spain prepared to enter its third week of lockdown, hospitals and morgues struggled under the pressure and infections rose to 72,248 from 64,059 the day before.

An unused public building known as "the doughnut" was the latest to be turned into a makeshift morgue after a city ice rink last week, Spanish media reported.

Health emergency chief Fernando Simon said the epidemic appeared to be reaching its peak in some areas, but the country was short of intensive care unit beds.

"We continue to have a major problem with ICU saturation," said Simon.

A delivery of 1.2 million masks bought by the Ministry of Transport from China for health, transport and postal workers arrived at Madrid airport, the government said.

Schools, bars, restaurants and shops selling non-essential items have been shut since March 14 and most of the population is housebound as Spain tries to curb the virus.

The number of coronavirus deaths in Britain jumped by 260 in one day to pass 1,000, official data showed Saturday, the day after Prime Minister Boris Johnson himself tested positive.

More than 17,000 people have also tested positive for COVID-19, including Johnson and his health minister, Matt Hancock, who are both now self-isolating with "mild" symptoms.

Britain was put on lockdown this week to try to stem the spread of the virus, with everybody in the country told to stay home wherever possible, and all non-essential shops and services shut.

The state-run National Health Service has been frantically freeing up hospital beds, and is building a 4,000-bed field hospital in a London conference centre, which is due to open next week. But there are still fears it cannot cope, and a senior NHS official said on Friday that hospitals in London -- the epicentre of the UK outbreak -- were facing a "tsunami" of patients.

Stephen Powis, medical director of the NHS in England, told the daily Downing Street news conference on Saturday that it was coping.

"We have not reached capacity. I'm also confident that capacity is expanding, particularly in London, so that we keep ahead of increased patient numbers," he said.

However, he added that "now is not the time to be complacent", saying it was vital that everybody followed the advice to stay at home.

"We will see over the course of the next month exactly how that will play out," he said.

In a video message on Friday from Downing Street, where he lives and works, Johnson said he would continue to lead the government's response to the outbreak. 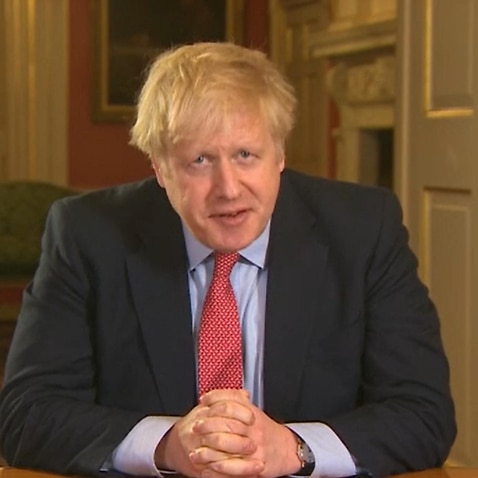 He remotely chaired a meeting on the crisis on Saturday morning, Sharma said.

"There are no gaps in the government. We are collectively all working very hard, led by the prime minister," the business secretary insisted.

Media reports said Johnson's pregnant partner, Carrie Symonds, who normally lives with him, moved several days ago to the couple's south London home to self-isolate there.

Another cabinet minister, Scottish Secretary Alister Jack, revealed on Saturday that he too was confined to his home after experiencing symptoms, but has not been tested.

England's chief medical officer Chris Whitty, another key player in the UK's response, also said Friday that he was in self-isolation after experiencing symptoms of COVID-19.

Germany has repatriated more than 160,000 of its nationals from abroad as borders close due to the coronavirus pandemic, Foreign Minister Heiko Maas said Saturday.

The foreign ministry had earlier estimated that around 200,000 Germans were stranded abroad and seeking repatriation.

Most were tourists who found themselves stuck after the country they were visiting closed its borders and suspended flights in and out.

"We have so far repatriated over 160,000 Germans," Maas said on Twitter. "We are going to continue," he added. Angela Merkel in quarantine after doctor tests positive for COVID-19

The government last week agreed to spend 50 million euros ($56 million) in a deal with commercial airlines to fly citizens home from affected regions.

EU foreign ministers have agreed to share flight capacity and data to help return as many people as possible to the bloc.

Germany, Europe's biggest economy, closed its land borders last week and the European Union has also sealed its external borders to incoming travellers to try to slow the spread of the novel coronavirus.

Germany has also imposed a ban on gatherings of more than two people, and shut schools, non-essential shops, bars and restaurants.