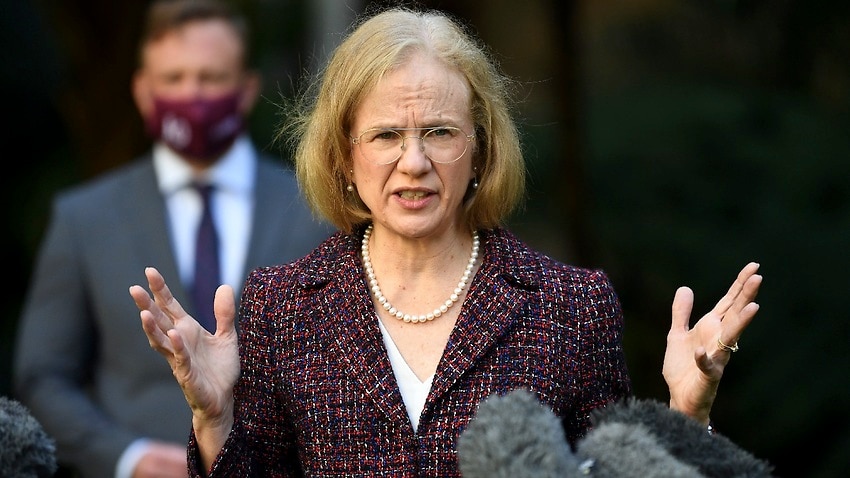 The Gold Coast is on alert with two men testing positive for COVID-19 after being out and about in the community for several days.

The first is a close contact of the aviation training centre worker who tested positive on Monday night.

The man, who lives in the Gold Coast suburb of Biggera Waters, was trained by the infected worker.

The second case won't be counted in Queensland's tally because it was detected in NSW. It involves a truck driver who lives at Gaven on the Gold Coast, and who regularly travels between Queensland and NSW.

He was active on the Gold Coast for three days, from 25 to 27 September, including in Mermaid Waters, Merrimac, Nerang, Surfers Paradise, Miami Beach and Currumbin.

Chief Health Officer Jeannette Young says there's still no need for a lockdown but that could change if there's any sign of significant community spread, or if unlinked cases surface.

The southeast corner is currently dealing with two separate clusters that are not linked to any previous infections the state has seen.

One is centred on the aviation training centre worker. His wife has also tested positive.

The other is centred on a truck driver who lives in Sydney, and arrived in Queensland on 16 September.

He stayed at two Spring Hill hotels and a hostel at South Brisbane before testing positive.

His contacts have been put into hotel quarantine and so far they have all tested negative, Dr Young said.

Dr Young is confident the Sydney truck driver picked up his infection in NSW.

Mandatory mask wearing rules in place for Brisbane and the Moreton Bay council areas have now been extended to the Gold Coast in response to the new infections there, as have visits to vulnerable facilities including aged-care homes and jails.

Dr Young was asked on Wednesday why she was comfortable with not imposing a new lockdown.

"I'm watching this very, very carefully. At the moment, I am prepared to wait and see if we've got any local transmission.

"At the moment all of these cases we've got are linked ... we don't have a random case in the community."

She said the two things that could change her position on a lockdown would be evidence of significant community spread, or the emergency of unlinked cases.

That leaves footy fans with tickets to Sunday's sold-out NRL grand final waiting to learn if they'll be allowed to flock to Brisbane's Lang Park for the decider.

If the match is shut down, Townsville is being considered as a plan B.

Health Minister Yvette D'Ath said more people would be forced into home quarantine as contact tracers delve into the movements of people linked to the two new clusters.

She said that's likely to include some of the 300 or so people who work at the aviation training centre.

"We should expect a lot more people to go into home quarantine over the next few days."