A Sydney shop has stopped selling Golliwog dolls after an online petition put pressure on the store to remove them. Some claim the dolls are offensive to people of colour while others say they are nothing more than a harmless toy. SBS takes a look at where the Golliwog came from.

Where did the Golliwog come from?

The Golliwog, originally spelt "Golliwogg," began life as a character in a book published in London in 1895 titled The Adventures of Two Dutch Dolls by Florence Kate Upton.

The book revolves around two dolls, Peg and Sara Jane, along with the Golliwogg. Peg and Sara are let loose in a toy shop where they spot what in the book is described as "a horrid sight, the blackest gnome". The Golliwogg featured in the book was influenced by the then-popular blackface minstrel tradition, which involved white performers pretending to be black.

The book was very popular in England and over the next 14 years, 12 more books were created featuring the Golliwogg character. 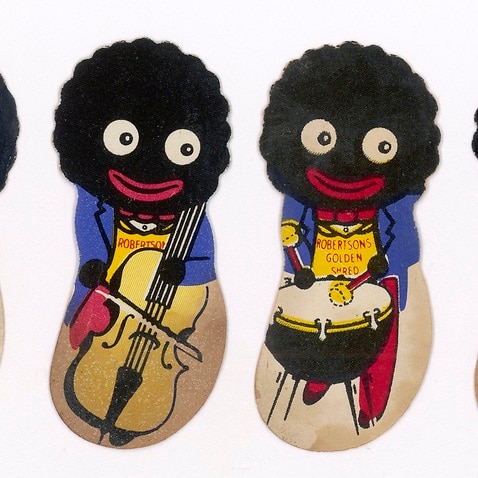 How did the Golliwog enter popular culture?

The Jim Crow Museum at Ferris State University in the United States has looked at the history of the Golliwogg, and said  Kate Upton did not copyright the character, allowing the image to enter into the public domain. During the first part of the twentieth century, the Golliwogg doll became a favourite children's soft toy in Europe, only surpassed by the teddy bear in popularity.

The Golliwogg name was eventually changed to Golliwog, and become a very popular character, especially in England and Australia, with the image appearing on everything from postcards, wallpaper, food jars and dolls and biscuits.

When did the controversy start?

According to Dr David Pilgrim, Professor of Sociology at Ferris State University, public criticism of the Golliwog began to intensify in the 1960s in the United Kingdom, partly influenced by the civil rights movement in the US and growing racial antagonism between black and white populations in the UK.

For some, the Golliwog doll and other items bearing the Golliwog image became a symbol of racial insensitivity. A caricature of a minstrel which many say is a character itself demeaning to blacks and a symbol of black oppression during the slave era.

In Australia, Golliwog dolls can be seen on sale throughout the country, especially in country towns. There are regular media reports about public criticism of shops selling Golliwog dolls, with Canberra Hospital also recently removing dolls from its kiosk.

There has been criticism of their sale by some Indigenous people in Australia, but commentator Luke Pearson,  NITV's digital engagement and editorial specialist and the founding director of IndigenousX, said it was important not to generalise.

"It's really a case by case. I have met some older people who grew up with them without knowing that context of racism. Who played with them as kids."

Mr Pearson said that it was now pretty well understood in most Western countries that the dolls have a racist origin in the blackface tradition. He said just because the dolls are now being sold in a different era doesn't take away their historical meaning.

"In Australia for some reason there seems to be this attitude of, 'Oh well we took them off the shelves for 10-20 years so now for some magical and unspoken reason they're not racist anymore'. But no, they're still the same Golliwogs that they have always been. I don't see why anything would have changed."

Those selling Golliwogs have a different view. On its website, online shop All Things Golliwog stated that the Golliwog is simply a toy. "The much maligned golliwog was never meant to be a symbol of political incorrectness or racism. It has been a much loved children's toy for over a century," it said.