Community groups in Australia are calling on the federal government to boycott the 2022 Beijing Olympics to avoid legitimising what they call repressive human rights policies, including the treatment of Uighurs. 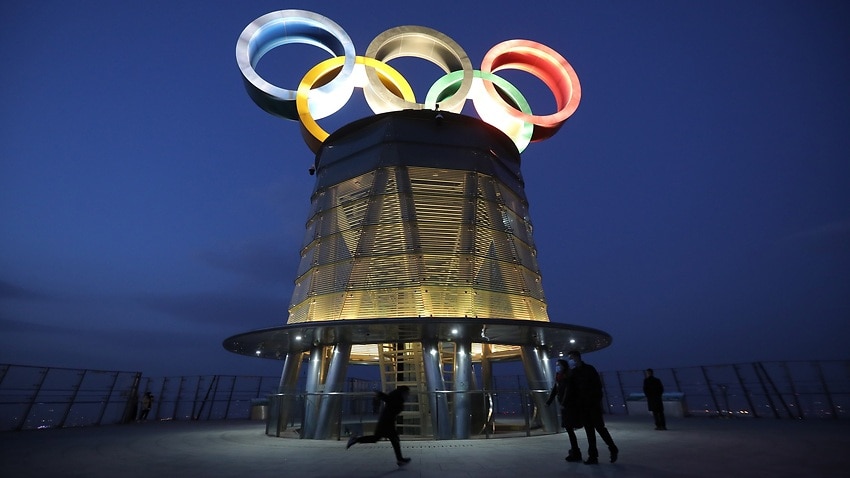 Visitors walk near the lit-up Olympic rings atop of the Olympic Tower in Beijing, China. Source: AAP

Diaspora communities in Australia from Xinjiang, Tibet and Hong Kong are stepping up pressure on the federal government to impose a diplomatic boycott on the 2022 Beijing Olympics.

Ramila Chanisheff from the Australian Uyghur Tangritagh Womens Association says her group is joining Australian diaspora communities from Tibet and Hong Kong to call for the boycott.

"Seven countries around the world have determined that China is committing genocide or grave human rights abuses against the Uighurs. The world has to speak up. We can't let another Holocaust happen. We can't be commemorating this years down the track."

She said she is still waiting to hear word from her cousins who disappeared three years ago.

"It is painful. We have completely lost communication. We can't get in touch with them on where they are, if they're alive. If they're taken in. If they're being sentenced."

As the world marks International Olympic Day on Wednesday, human rights activists will kick off a worldwide series of protests calling for the boycott.

Protests are planned for Canberra, Sydney, Melbourne, Brisbane and Adelaide, alongside some 50 other international cities.

Former Hong Kong legislator Ted Hui said members of the Hong Kong diaspora in Australia are also backing the call for Australia to boycott the games.

"The reason why different ethnic groups are coming together on this issue is that we are all facing persecution either directly or indirectly by China, by the China Communist Party regime.

"For example, people in Hong Kong are being jailed for speaking up for freedom and for speaking against the regime. We feel the need to speak up so nations can hear us to know that China is not a country they should be working with when it comes to the Winter Olympics.

"The Olympics is all about fairness, sportsmanship, openness and improvement of social welfare values. But the CCP in China is actually killing all these values. A boycott - or at least relocation - would be only fair for all of us for universal value."

Sports Minster Richard Colbeck said the decision on attendance at the games is one for the Australian Olympic Committee.

"It is not the government but the independent Australian Olympic Committee that is responsible for sending teams to Winter and Summer Olympic Games," he told the Senate last year in October.

The AOC said it plans on sending athletes to the Beijing Olympics and wants politics to be kept out of the sporting event.

"The merit of boycotting a single sporting event, in circumstances where sport, and the Olympic Games in particular, has a unique capacity to bring countries together in peaceful competition, promoting dialogue, is questionable and also risks being counter-productive," AOC President John Coates said in a parliamentary submission.

The document was a response to a proposed amendment by crossbench senator Rex Patrick that would allow the government to exercise the power to have Australia boycott the Olympics.

US Secretary of State Antony Blinken said he is interested in seeking a "common approach" with other countries on a potential boycott, which "will be much more effective than doing something on our own".

Dr Zoe Bedford from the Australia Tibet Council said diaspora groups are calling for Australia's political leaders to send a message that China's treatment of Tibetans cannot be tolerated.

"Tibetans have essentially been in lockdown, in a surveillance state. Around the time of the 2008 Beijing Summer Olympic Games, broad new security measures were brought in and they haven't been lifted. Australian Tibetans cannot go visit their family in Tibet. Their visas are denied. Tibetans in Tibet can't travel outside of Tibet. These are the kinds of things that have changed since the 2008 Beijing Olympic Games - and we just think: enough is enough.

"We find it unconscionable that officials from Australia would go and celebrate with their Chinese counterparts when we know all the human rights violations that are going on in China. So we're calling for a diplomatic boycott or a full boycott from governments all around the world."

She said there is awareness of the need to minimise the impact on athletes who have been training for years to compete at the Games.

A woman with a young boy visit Beijing Olympic Park on 4 February 2021 - 365 days before the 2022 Beijing Winter Olympics. Source: AAP

"A diplomatic boycott of course would mean athletes would go, and their support staff. But no-one else would go from the Australian government, from embassies, to go and celebrate with their Chinese counterparts.

"We think this would have strong action and China would be affronted by this. Would this result in behavioural change from China? We don't know, but we feel we have to try because of the suffering that is going inside China right now."

Tenzin Dolmey from the Tibetan Community Victoria group said after Beijing hosted the 2008 Summer Olympics, the repression of Tibetans only got worse - and she fears that same thing could happen after the 2022 Games.

"China happily repressed the Tibetans inside Tibet in 2008. And the following year, we saw a wave of self-immolations across Tibet. And there were monks, nuns, laypeople, students and young women calling out the repressive rule inside Tibet... and also calling for help to the world about the situation inside Tibet.

"The human rights situation inside Tibet actually got worse after 2008. And according to Freedom House, Tibet is actually the second least free country, second after North Korea."

Reconciling the Olympic Charter with the evolution of the Games

An emeritus professor of cultural research at Western Sydney University, David Rowe, said there are tensions in the Olympic Charter that can be hard to reconcile with how the games has evolved in modern times.

"Billions are being spent. And where a lot of money is, politics is never far behind.

He said the origins of the Olympic Charter was about an aspiration and ideal that was much harder to bring about in reality.

"The Olympics were revived in 1896 by a French aristocrat Baron Pierre de Coubertin and he wanted to think of Olympism as a way of life. In charter, it describes Olympism as a philosophy of life.

"So it comes from a romantic notion that the young people of the world will come to understand each other through sport and enhanced economic international understanding and so on."

"Increasingly, from the last century forwards, there has been pressure on the Olympic movement to live up to its lofty ideals.

"Not to be corrupt, and to carry through on its ethic of anti-discrimination on grounds of race, sex, religion. Holding the IOC to account. As a consequence, there has to be a consideration of all the IOC's interests, including commercial ones."

Daryl Adair, associate professor of sport management at the University of Technology Sydney, said there has been a history of boycotts and protests attached to Olympic events over the years that have had varying degrees of success.

"The Montreal boycott was targeted at New Zealand’s ongoing relationship with South Africa in the non-Olympic sport of rugby. South Africa itself was already banned from the games. So that was a particularly unusual protest.

"Five years after this boycott, international pressure was such that the last All Black’s game against the (apartheid) Springboks was in 1981. So, this was arguably an effective, even if unusual boycott by several African countries.

"Subsequent boycotts in 1980 and 1984 were fundamentally geopolitical conflicts rather than human rights concerns.

"It is not surprising that Uighur and Hong Kong activists are lobbying the IOC to move the 2022 Games from Beijing. As they see it, the Chinese capital – as host of the Games – does not epitomise the message of inclusivity that the IOC declares is at the heart of the Olympic Movement."

In Australia, there were calls for a boycott in 1980 when then prime minister Malcolm Fraser was asked by then US president Jimmy Carter to withdraw Australia's delegation over Russia's invasion of Afghanistan.

"If any lessons are to be learnt from the attempted boycott of the 1980 Moscow Games, it is that there is a risk that athletes become political pawns," Mr Coates said in the AOC's parliamentary submission.

"The impact on individual athletes of the calls to boycott the 1980 Moscow Games lasts to this day."

He said a boycott by the AOC of the Beijing Olympics would lead to its suspension as a National Olympic Committee under the Olympic Charter.

"Australia is one of only two countries whose athletes have competed in every Olympic Games in the modern era. That is an achievement of which we are very proud and a tradition we plan to continue."

Mr Coates said the Australian government is free to make their own decision on not attending the Games, but that choice should be separate from the attendance of athletes.

US activists outside the White House call for a boycott of the 2022 Winter Olympics and further action against China on 4 June 2021. Source: AAP

Earlier this month, China's foreign ministry spokesman, Zhao Lijian, denounced news of the US pledge to boycott the 2022 Beijing Games.

"China firmly opposes any US initiatives to boycott the Beijing Winter Olympics under the pretext of so-called human rights issues."

A piece in China's state-run Global Times newspaper in October warned that any boycott by Australia would not be received well in China.

Politicians from 11 countries around the world backed calls for "coordinated legislative actions on the Beijing 2022 Winter Olympics in light of widespread human rights abuses in the Uyghur Region and elsewhere in China".

In a statement released earlier this month, the Inter-Parliamentary Alliance on China said the Olympics principles are incompatible with China's "ongoing gross violations of human rights".

“The Olympic Games are an opportunity for people across the world to unite in a shared celebration of sport, friendship and solidarity – a celebration which should transcend national and political divides.

"We, the Co-Chairs of the Inter-Parliamentary Alliance on China, are of the shared belief that this cannot be reconciled with holding the games in a country whose government stands credibly accused of perpetrating atrocity crimes against its own population. To do so discredits the ethos of the Olympic movement and undermines its purpose.”