Between 7,000 and 8,000 migrants have entered Guatemala since Friday, according to its immigration authority, fleeing poverty and violence in a region battered by the pandemic and back-to-back hurricanes in November.

Guatemalan authorities on Saturday (local time) escalated efforts to stop thousands of Hondurans, many of them families with children, traveling in a migrant caravan bound for the United States just as a new administration is about to enter the White House.

Between 7,000 and 8,000 migrants have entered Guatemala since Friday, according to Guatemala’s immigration authority, fleeing poverty and violence in a region battered by the pandemic and back-to-back hurricanes in November.

Videos seen by Reuters showed Guatemalan security forces clashing with a group of hundreds of migrants who managed to break through a police blockade at the village of Vado Hondo, near Chiquimula in eastern Guatemala.

“A small group got through and the rest were detained. The people who got past have been located,” Alejandra Mena, a spokeswoman for Guatemala’s immigration agency, said. 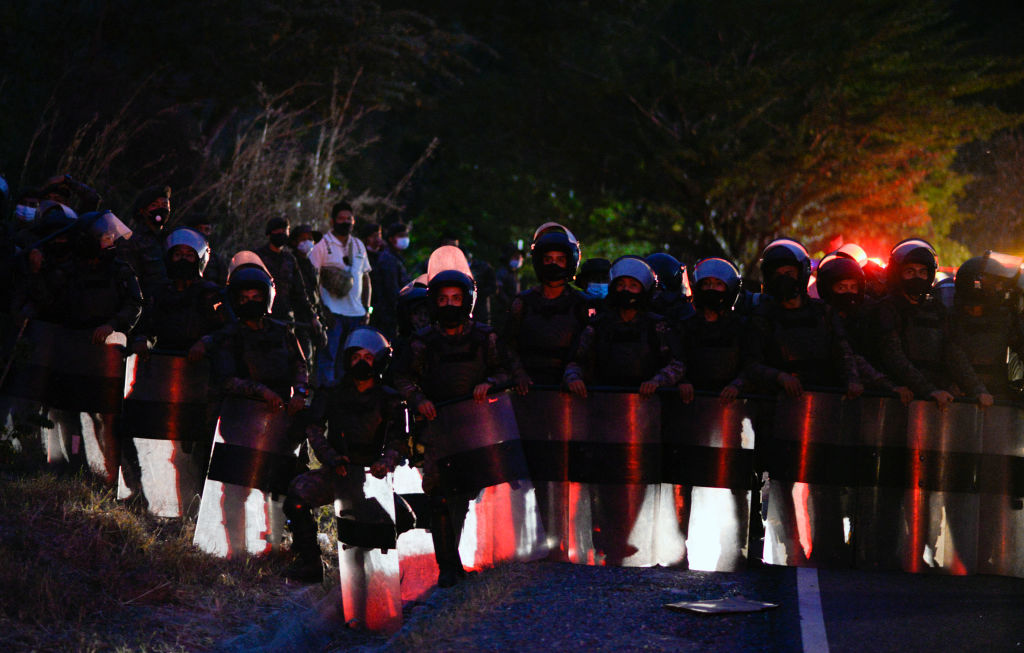 Guatemalan Army members stand guard nearby Honduran migrants on their way to the United States, at Vado Hondo in Guatemala, on 16 January, 2021.
AFP

Between Friday and Saturday, Guatemala had sent back almost 1,000 migrants entering from Honduras, the government said, as the caravan moved towards Mexico.

The caravan is likely to come under more pressure in Mexico. Mexico’s migration accord with the United States still holds, so the caravan would be dispersed, a Mexican official said.

On Saturday evening, the Mexican foreign ministry pressed local authorities to halt the caravan’s progress, pointing to the need to contain the spread of COVID-19. In a statement, the ministry praised the Guatemalan government for acting in a “firm and responsible” manner toward migrants that had “violated (Guatemala’s) sovereignty” and urged Honduras to prevent further movements of people.

Mexico, it said, was committed to orderly and regulated migration and would oppose any form of unauthorised entry.

The first migrant caravan of the year comes less than a week before US President-elect Joe Biden takes office promising a more humane approach to migration, in contrast to outgoing President Donald Trump’s hardline policies. Mexican and Central American authorities have coordinated security and public health measures in a bid to deter mass movements of people across the region, deploying thousands of security forces.

The caravan nevertheless grew considerably into Saturday, with members citing a spiraling crisis of hunger and homelessness in Honduras as reasons for joining.

“We have nothing to feed to our children, and thousands of us were left sleeping on the streets,” said Maria Jesus Paz, a mother of four children who said she lost her home in the hurricanes. “This is why we make this decision, even though we know that the journey could cost us our lives."

“First I lost my job because of the pandemic, and then I lost my home in the hurricanes,” said Melvin Paredes, who joined the caravan with his brother. “The only thing I have left is to fight for my family’s survival.”