Officials believe 12 boys and their football coach are still alive in a Thai cave, but rescuers can't get to them due to heavy rains.

Rising waters prevented divers from moving deeper into a cave complex in northern Thailand flooded by heavy rains, forcing them to suspend their search Monday for 12 boys and their soccer coach who have been missing for two days.

Despite the setback to the search, officials said they believe the group is still alive.

"It's showering. The water level inside the cave is going up," the Royal Thai Navy SEAL posted on its Facebook page.

The navy also said handprints were found on the cave's walls.

The boys, aged 11-15, are believed to have entered the Tham Luang Nang Non cave in Chiang Rai province with their 25-year-old coach late Saturday afternoon. 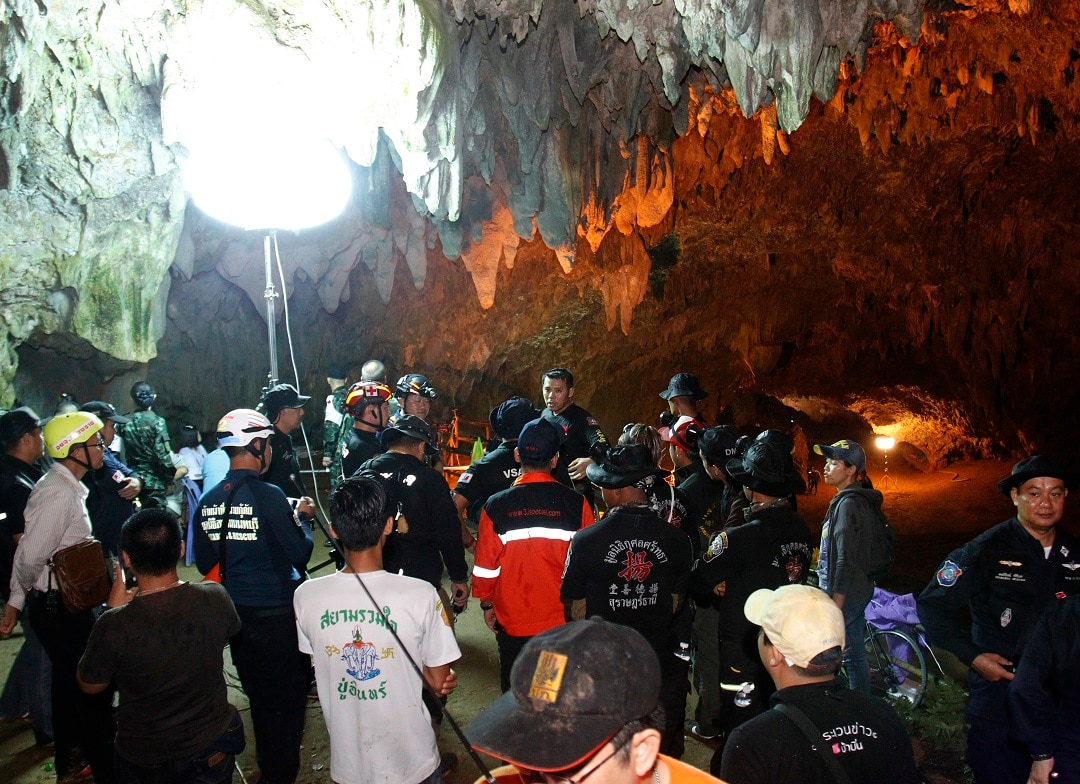 Thai rescue workers and associated officials plan a rescue operation for 12 football players and their coach outside the Tham Luang cave.
AAP

An official at the forest park in Chiang Rai province where the cave is located said the getting to the large chamber where the students might be is difficult.

The passage to the chamber is extremely small, flooded and "covered with sand and mud", Kamolchai Kotcha said.

Further attempts later on Monday also failed to locate the boys, though rescue teams have found "traces" of them inside the cave, police in Mae Sai district said.

"Right now, our family is hoping that the children trapped inside will have formed a group and are safe and waiting for officials to go in and save them in time. That's what I'm hoping," said Noppadol Kantawong, the father of one of the missing boys. Footage on Thai television showed bicycles and backpacks left outside the entrance to the cave.

A mother reported that her son did not return from soccer practice that day, setting off the search.

"I hope that they are safe. I still have hope. I hope that all 13 of them will be out," said Namhom Boonpiam, mother of 13-year-old, Mongkol Boonpiam who is missing.

The rising water frustrated efforts by the rescuers, including navy SEAL divers, to search farther in the cave, which is thought to be about 6-8 kilometres (4-5 miles) long and contain some large chambers.

By Monday evening, officials made the call to temporarily pull out.