Authorities suspect two fires that started on Tuesday in Turramurra on Sydney's north shore and Loftus in the Royal National Park were deliberately lit.

NSW Rural Fire Service Shane Fitzsimmons has called for anyone caught lighting fires to spend time behind bars as authorities investigate if two fires in Sydney were deliberately lit.

Police have set up a crime scene in Turramurra as they work to establish the cause of an emergency bushfire which threatened homes on Sydney's upper north shore.

The RFS also believe a fire in the Royal National Park at Loftus, south of Sydney, was also suspicious as there were multiple ignition points. 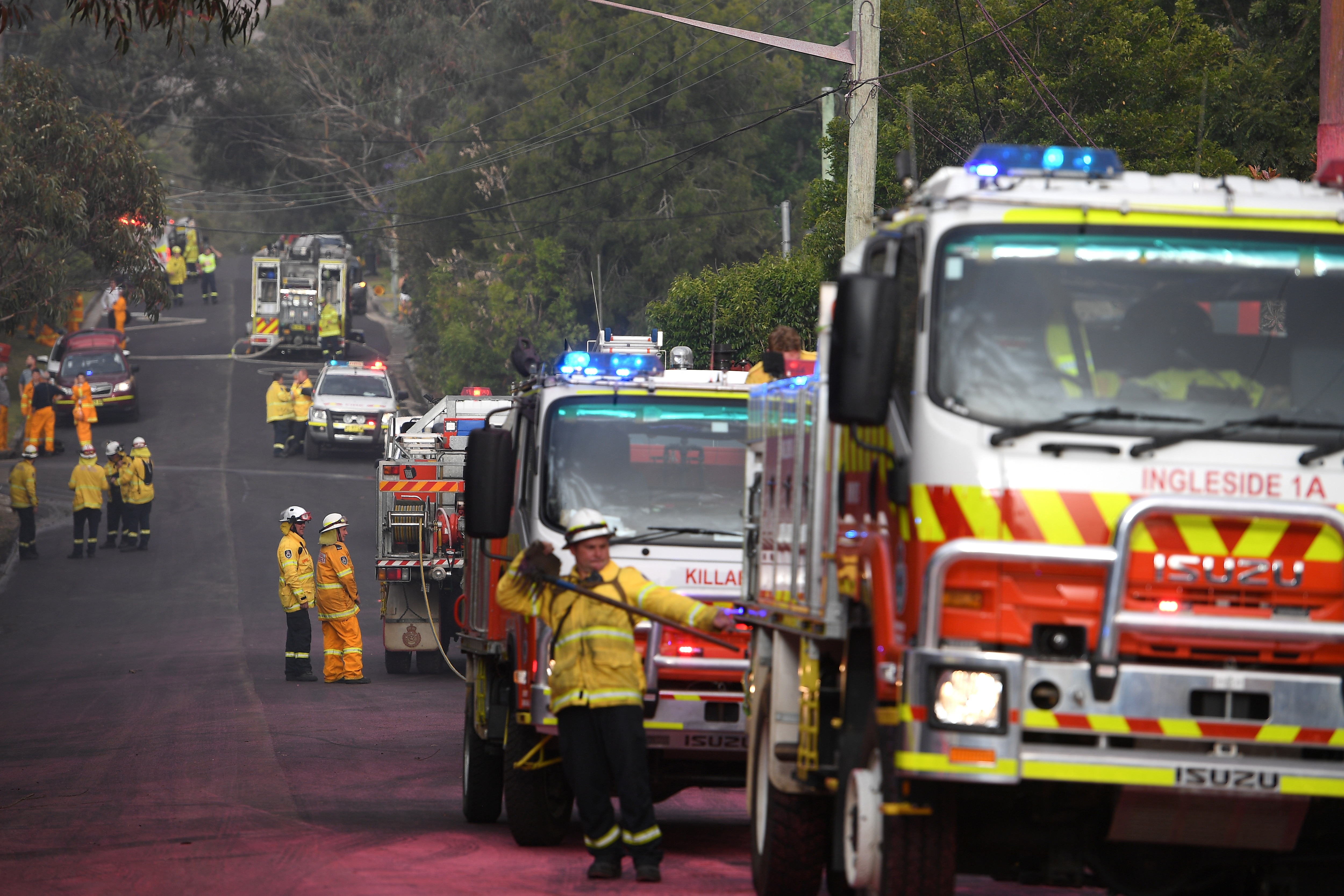 "We are treating this as suspicious and if it's been deliberately lit then it's a heinous crime and those that are the perpetrators of such a thing deserve to have the whole weight of the law thrown against them and spend some time behind bars," Mr Fitzsimmons told reporters on Tuesday night.

While firefighters were able to extinguish both blazes before property was lost, the effort diverted much-needed resources from other uncontained fires.

An aircraft assigned to another fire was quickly sent to Turramurra to drop fire chemical retardant on the flames which prompted an emergency warning. 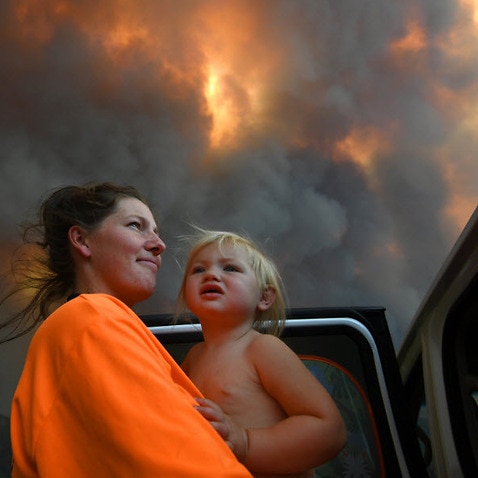 Relief as NSW survives 'catastrophic' bushfire conditions but danger not over

"We diverted that (plane), turned it around, and got it to rapidly intervene and provide meaningful drop and knockdown effect on that fire in Turramurra," Mr Fitzsimmons told reporters.

He said NSW had some of the strongest penalties in Australia for such crimes.

"You can spend a long time in jail for lighting fires at any time, let alone on a total fire ban day and under some of what can only be described as the worst possible conditions forecast in a highly populated areas like Sydney."

Ms Berejiklian said perpetrators can expect to face the full force of the law.

Four people were charged on Tuesday with breaching the total fire ban which remains in place on Wednesday.

"You must have arrived (from) Mars in a bubble if you didn't know yesterday that the state was in severe danger and the fact that we had people wanting to act outside the law, endanger their communities, really is quite offensive to the people of New South Wales," Mr Elliot said.

Some of the pink retardant sprayed to protect homes in Turramurra had overshot the blaze, coming down on suburban houses and vehicles.

Commissioner Shane Fitzsimmons was quick to tell residents the retardant would wash off with water.

"Clearly, it's not only hit the mark of the fire, but extended into the road and we've got crews, we've got vehicles, we've got homes, we've got property that is now coloured pink," he said. The RFS says the pink retardant will wash off.
AAP

"There are guidelines available ... about hosing down and washing down the retardant."

Mr Fitzsimmons said the colour was simply a dye added to the phosphate-based product so aircrews could see where loads had landed.

A nearby fire at Kissing Point Road was briefly at emergency level but was quickly downgraded to "advice" as it was brought under control.

One local said being confronted by fire on their residential street was "overwhelming".

Brad Morgan, 45, said he genuinely feared he might lose the home he has lived in for 15 years, as he described dousing spot fires with water from his pool. 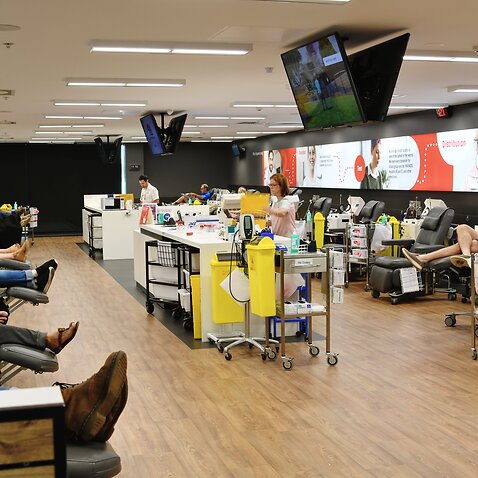 "We could see embers hitting the canopy of the trees - so I put all the valuables and the kids in the car with my wife and sent them away," he told AAP.

"There was no water pressure left in the taps - literally you couldn't get a drop of water - so I ended up getting a bucket from the pool and put out the spot fires we had around."

Student Patrick Kurtesz fled the fire in a stranger's car after stomping on embers in the garden. 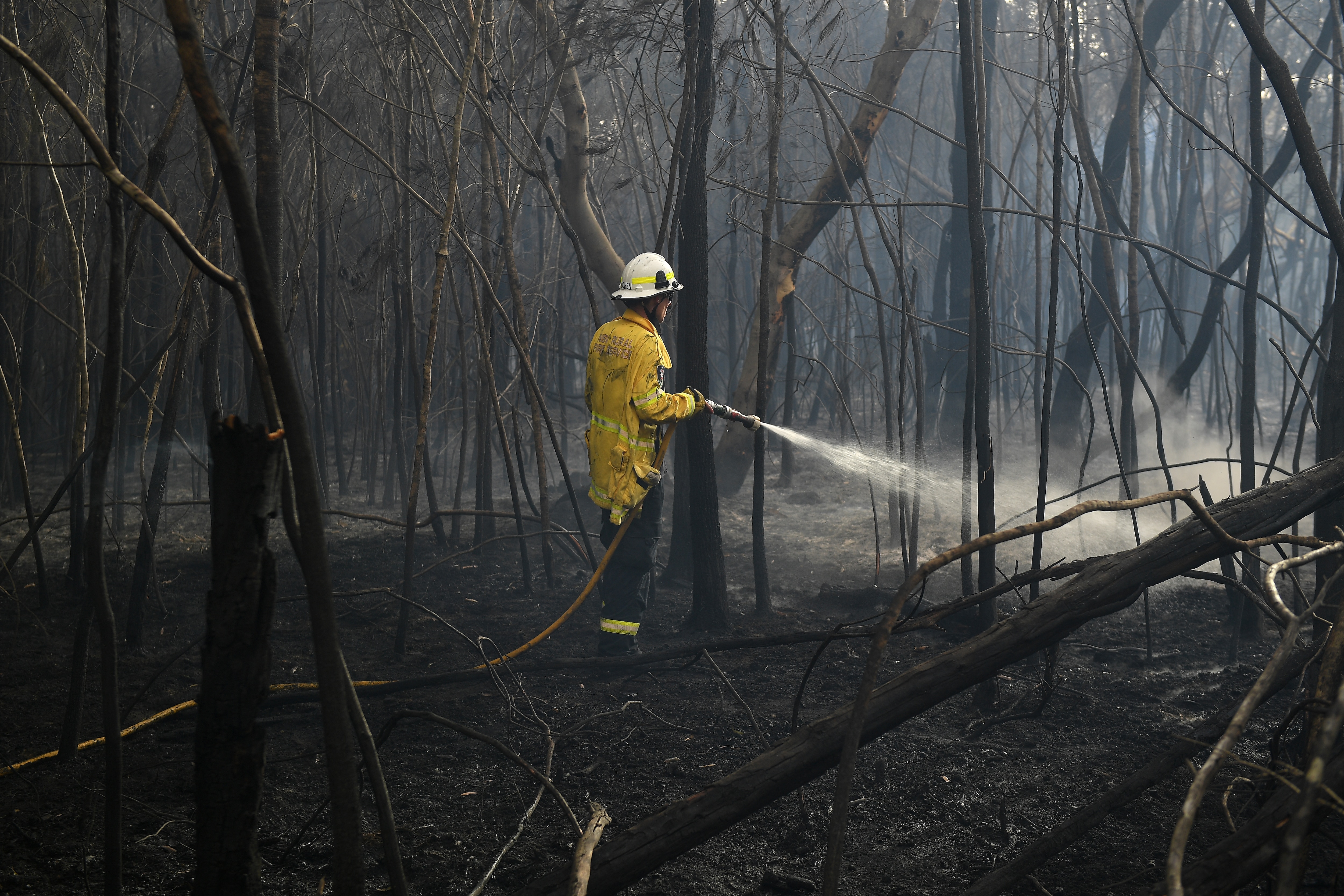 The 21-year-old described a "big plume of black smoke" and said he ended up jumping in a car with people passing by.

"Honestly, like I got in the car, and they were such lovely people. But it was really hard for me to focus because I was just like, what if my house has gone down?" he told AAP.

"I keep saying this: it's not supposed to be fire season yet."

A mother-of-three living in nearby West Pymble had packed her bags ready to leave when the fire emergency hit.

The 47-year-old, who did not want to be named, said it felt "very surreal" to be preparing to flee the suburban area she'd lived in for 15 years.

"I never in a million years thought I would be packing, having everything at the door ready to go, waiting to be told 'time to go'," she told AAP.

She said hearing low-flying aircraft overhead had given them "a bit of a fright" and described how she and all her neighbours had been out hosing down the front of their properties on Tuesday in a bid to protect them.