Politicians have joined a sign language challenge to bring attention to its importance in ensuring equal access in life.

MPs have tried their hands at sign language to focus attention on the need to ensure those living with hearing impairments have equal access to services.

More than 30,000 Australians communicate using Australia’s Auslan, which is being recognised as part of the UN International Day of Sign Languages.

And for the first time politicians have participated in a ‘leaders challenge’ to mark the occasion, posting videos to social media of their journeyman attempts at signing the language.

But an advocate for deaf people says political leaders still need to do more to support those facing barriers to accessing education and workplace opportunities.

Happy International Day of Sign Languages! How good is Auslan! Today to show my support for our deaf community, I’m taking part in the first #AuslanLeadersChallenge and having a go at Auslan. I'd encourage all Australians to give it a try.#IDSL2019 #TheDeafSociety pic.twitter.com/6fk8ehY9tA

CEO of the Deaf Society Leonie Jackson told SBS News it's important for politicians to empathise with sign language users and recognise the need to support their access to services.

“It is critical to raise that awareness of Auslan,” she said.

“We do have so many systemic disadvantages for deaf people to be able to access any type of service.” Health Minister Greg Hunt was one of those to take part in the challenge – introducing himself using the sign language before making this statement.

“One of the things that is most satisfying and most important, is access to health and ensuring that we include people from all backgrounds and abilities,” he said.

“That’s why this initiative is so important … real health outcomes for people with all abilities and all hearing needs.”

A message of unity, courage and kindness among Australians can be heard even when we don’t make any noise. @deafsocietynsw#AuslanLeadersChallenge #TheDeafSociety #IDSL2019 #IWDeaf2019 pic.twitter.com/skDkhOhQoN

Ms Jackson said access to sign language services needs to be ensured across the “whole cycle” of people’s lives from education to the workforce.

"At the moment there is no policy in education, in any education department Australia wide that Auslan could actually be provided for students who require it," she said.

“That program provides up to $6,000 every year worth of interpreters for deaf people individually,” she said. 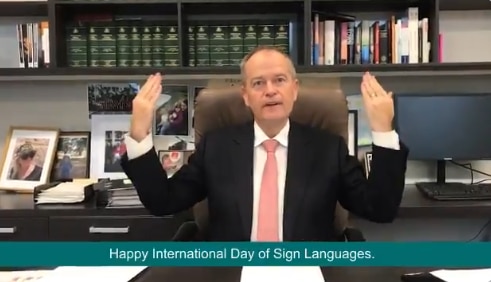 In his video, Opposition NDIS spokesperson Bill Shorten supported calls for more resources and training to be diverted to Auslan initiatives to improve access to services.

“I think it is really important for more hearing Australians to learn Auslan, so that we can better communicate amongst all Australians,” he said.

Happy International Day of Sign Languages. Auslan is such a wonderful method of communication, I hope I didn't mess it up too much! Today we express solidarity with deaf people everywhere. #IDSL2019 #DeafCommunity #Auslan #NDIS pic.twitter.com/iFnjTCxKZy

It followed a similar campaign in New Zealand that won the support of Prime Minister Jacinda Ardern in 2018.

Thank you @JulieOwensMP for your support in rallying MP's in Parliament last week for the Auslan Leaders Challenge! See the video here: https://t.co/5G5uYefHca pic.twitter.com/8KkqzhIB9B

Ms Jackson told SBS News it was a reminder for politicians to keep those with hearing impairments in mind when making decisions.

“You don’t see any deaf people who are members of parliament,” she said.

“There is a lot more work to be done, in terms of making things a bit fairer.”

“[But] I do have optimism for the future.”