For years, conservative justices have said the court disfavours the Second Amendment. Justice Barrett is likely to shift the balance, and a case to help her do so may be knocking.

Justice Amy Coney Barrett is just starting to make her mark at the Supreme Court.

On Wednesday, her vote flipped the court’s approach to restrictions on attendance at religious services during the coronavirus pandemic. While Justice Ruth Bader Ginsburg was alive, the court had allowed such limits, in California and Nevada, by 5-4 votes. After Justice Barrett succeeded her, she joined the court’s four most conservative justices to strike down restrictions in New York.

Those same four justices are now on high alert for a promising case in which to expand Second Amendment rights, having written repeatedly and emphatically about the court’s failure to take gun rights seriously. Justice Barrett seems poised to supply the fifth vote they need. A Second Amendment case decided last week by the federal appeals court in Philadelphia is a promising candidate for Supreme Court review, not least because it presents an issue on which Justice Barrett has already taken a stand.

It concerns Lisa M Folajtar, who would like to buy a gun. But she is a felon, having pleaded guilty to tax evasion, which means under federal law she may not possess firearms.

She sued, arguing that the law violated her Second Amendment rights. A divided three-judge panel of appeals court rejected her challenge, saying that committing a serious crime has consequences. It can lead to losing the right to vote, to serve on a jury - or to have a gun.

The ruling adopted the position of the Trump Justice Department. “The right to keep and bear arms is analogous to other civic rights that have historically been subject to forfeiture by individuals convicted of crimes, including the right to vote, the right to serve on a jury and the right to hold public office,” lawyers for Attorney General William Barr told the appeals court.

In dissent, Judge Stephanos Bibas, a former law professor appointed to the court by President Donald Trump (and the author of a scathing decision on Friday rejecting the president’s challenge to the election results in Pennsylvania), wrote that the framers of the Constitution would not have allowed lawmakers to bar felons convicted of nonviolent crimes from owning guns.

“Lisa Folajtar asks us to treat her as an equal member of society,” he wrote. “Though her tax-fraud conviction affects some of her privileges, it does not change her right to keep and bear arms.”

Judge Bibas wrote that his analysis had drawn heavily from a dissent last year in a similar case concerning a man convicted of mail fraud. From RBG to ACB: Amy Coney Barrett’s Supreme Court appointment and the future of abortion rights

That dissent was written by Justice Barrett when she was a judge on the federal appeals court in Chicago. The law forbidding people with felony convictions from owning guns, she wrote, should not apply when the crimes in question were nonviolent.

Voting and jury service are different, she wrote, because those are “rights that depend on civic virtue".

The Supreme Court has not issued a major Second Amendment decision since a pair of rulings, in 2008 and 2010, established an individual right for law-abiding citizens to keep guns in their homes for self-defence. Beyond that, the justices have said almost nothing about the scope of the right, and lower courts have sustained many kinds of gun control laws.

Before Justice Barrett’s arrival, the court’s four most conservative justices had repeatedly written that the court should return to the subject of the Second Amendment.

In 2017, for instance, Justice Clarence Thomas, joined by Justice Neil Gorsuch, wrote that they had detected “a distressing trend: the treatment of the Second Amendment as a disfavoured right".

“For those of us who work in marbled halls, guarded constantly by a vigilant and dedicated police force, the guarantees of the Second Amendment might seem antiquated and superfluous,” Justice Thomas wrote. “But the framers made a clear choice: They reserved to all Americans the right to bear arms for self-defence.”

In June, however, the court turned down some 10 appeals in Second Amendment cases. Since it takes only four votes to grant review, there is good reason to think that the court’s conservative wing was unsure it could secure Chief Justice John Roberts' vote.

Justice Barrett’s arrival changes the calculus. Should Ms Folajtar appeal to the Supreme Court, it is a good bet that Justice Barrett will find her arguments persuasive. 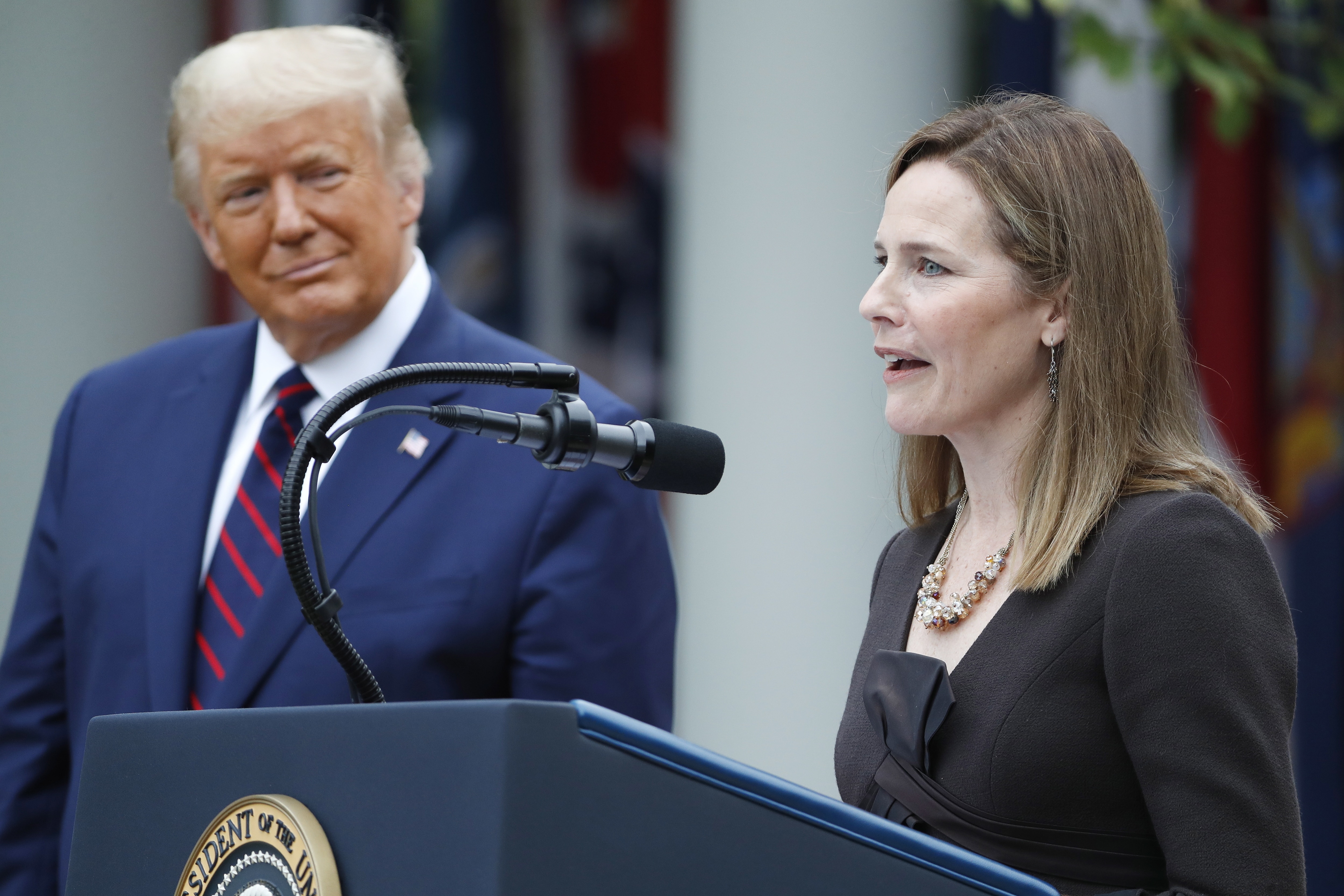 Judge Amy Coney Barrett (R) speaks after being introduced by US President Donald J. Trump as his nominee to be an Associate Justice of the Supreme Court.
EPA

“Nothing in our opinion,” Justice Scalia wrote, “should be taken to cast doubt on long-standing prohibitions on the possession of firearms by felons.”

Last year, the court agreed to hear a challenge to a New York City gun-control ordinance. But it ended up dismissing the case in April, after the city repealed the ordinance.

Dissenting from that ruling, Justice Samuel Alito noted that the Heller decision “recognised that history supported the constitutionality of some laws limiting the right to possess a firearm,” including ones “prohibiting possession by felons and other dangerous individuals".

That last phrase, which did not appear in the earlier decision, may be significant. In shifting the focus to dangerousness, it seemed to open the door to the position taken by Justice Barrett.