From Stockholm to San Francisco, this is how the world attempts to make childcare an affordable way for parents to balance work and family life.

Both Labor and Liberal agree on a need to increase childcare assistance - but the major parties can’t agree on how to provide the assistance.

The government wants to cut other family payments before committing to any childcare relief.

Education Minister Senator Simon Birmingham argues affordable childcare is vital in families choosing "when or how much to work that best suit their family circumstances".

A 2014 Productivity Commission report recognised that access to affordable childcare can lift workforce participation and benefit children's development, particularly for those from disadvantaged backgrounds. 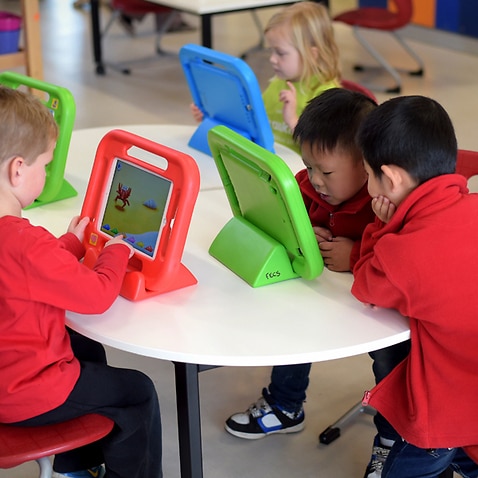 Government seeks to save $5 billion in reforms to childcare payments, paid parental leave

Childcare costs in Australia have been rising steadily over the past decade. In the past three years, these increases have even outpaced rises in the cost of electricity and housing.

Senator Birmingham announced today that 3600 families had already run out of the $7500 rebate for 2016-17, which covers half the cost of childcare. Despite many families reducing their use of care, another 90,000 will hit this cap before July.

On a global scale, parents in Australia still pay more for childcare than parents in most OECD nations. A 2012 book by Eva Lloyd and Helen Penn, 'Childcare Markets: Can They Deliver an Equitable Service?' noted that "childcare markets predominate in English speaking nations".

That may provide support for arguments against reliance on the private sector to deliver childcare services. However some countries with extremely large public spending on childcare still extract fees from parents.

Norway's government spends 0.5 per cent of its GDP on childcare, according to 2013 OECD figures. Spending on childcare in a typical family still exceeds 10 per cent of income. Norwegian children have a right to childcare from around the age of one.

Prices are capped at the equivalent of approximately AU$400 per month, and providers are required to ensure enough places are available. The system is not perfect - age requirements mean parents reportedly avoid having children born soon after the yearly cut-off.

In Finland the government spends 0.6 per cent of GDP on childcare, but typical families still spend more than 15 per cent of their income on childcare. Both figures are higher than those in Australia.

In the Finnish capital Helsinki, a family earning the equivalent of AU$100,000 per year pays approximately AU$400 per month for one child in care.

Swedish parents pay relatively little for childcare for their children - less than AU$200 per month for even the wealthiest parents. However no OECD country spends more public money on childcare than Sweden, at 1.1 per cent of GDP. Sweden's system of "Educare" provides a guaranteed place to each child in a system which encourages play.

These countries have high levels of public expenditure on childcare.

In contrast, the US spends an amount equivalent to just 0.1 per cent of its annual GDP on childcare. Parents pay higher fees than in Scandinavian countries, in most states more than it would cost to send a child to college. In smaller metro centres, costs are approximately AU$800 per month for centre-based care, but this more than doubles in major cities such as San Francisco and Boston.

Modest annual tax credits worth up to AU$1300 per child are available. President Donald Trump hopes to increase these to close to $2000, but he has not yet announced how he will deliver that promise.

However in at least one case, the US model is delivering cheaper prices for families compared to Australia.

Annika Whistlestop*, her partner and two children aged three and four recently moved from Gladstone in Queensland to Corpus Christi in Texas, USA.

In Australia she was paying around $95 per day per child on day care and could only afford to have them in care for three days. No food or nappies were included.

For the year the family was paying around $23,000, after applying the child care rebate, for three days' care.

"We also feel that the curriculum here is more learning based as opposed to Australia where learning was mostly through play," she said.

"Our children are also learning some Spanish.

"We are much happier with the rates in the USA."

Have you used child care in other countries? Email jackson.gothe-snape@sbs.com.au with what worked, what didn't, and how your costs compared.

*Names have been changed by request.