At a rally in North Carolina, US President Donald Trump doubled down on his attacks against four Democratic congresswomen and appeared to invoke a slogan used by white nationalists telling them to 'love it or leave it'.

“If they don’t love it, tell them to leave it" - that was US President Donald Trump’s message about four Democratic congresswomen at a rally in North Carolina, where supporters called for one of four female politicians - who was born overseas - to be “sent back”.

“Let ’em leave,” Mr Trump said of the four women. “They’re always telling us how to run it, how to do this, how to do that. You know what? If they don’t love it, tell ’em to leave it.”

But the ‘love it or leave it’ line is an eerily familiar slogan of the Klu Klux Klan in North Carolina, according to Australian National University US politics expert Jennifer Hunt.

Dr Hunt, who grew up in North Carolina, said the “Love it or Leave it” slogan was used by the KKK years ago when it claimed to be fighting “communism and integration”. “I remember seeing signs as a child, ‘Welcome to Klan country … love it or leave it,” she told SBS News.

“Many of those good people didn’t leave North Carolina, they worked to improve it. And the white nationalists who remained didn’t relinquish their degenerate slogans and ideas, just their decent place in society.

“But when they’re ushered back in, that threatens the safety of us all.” Mr Trump’s rally cries came on the back of days of criticism after he told the four women to “go back” to their countries of origin, although three of them were born in America.

When Mr Trump made the “love it or leave it” remark, the crowd responded enthusiastically back shouting, “leave it!”

A protester calls out as President Donald Trump speaks at a campaign rally.
AP

“They’re being brought in from the cold after a whole generation of being cast out of polite society and now they’re’ feeling empowered," she said.

“They feed off these messages off the most important office holder on the planet so what he says matters and we should be holding him up to the highest standard.

"I'm a person of colour," says white US Congressman

But such language, in turn, could have significant real-life consequences, she added.

“We have white nationalists that are celebrating this president and saying he supports our message and ‘finally have our man in the White House’," she said. 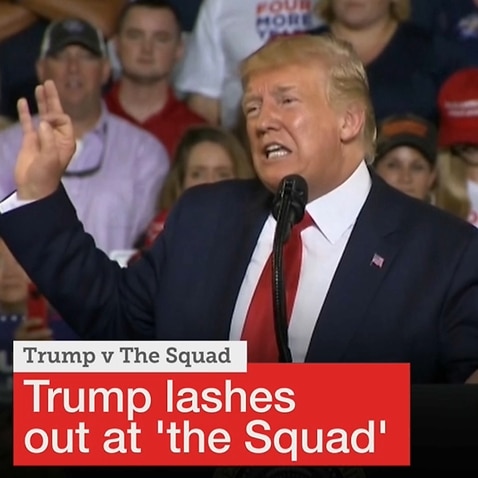 'Send her back!': Trump rally erupts into chant about congresswoman Ilhan Omar

“And we see that white nationalist ideas when weaponised with violence are capable of brutal massacres in churches, mosques and synagogues.”

At the rally, Mr Trump doubled down on his attacks against the four congresswomen to enthusiastic supporters who chanted, “Send her back! Send her back!” in reference to Ilhan Omar, who arrived in America as a child refugee.

Dr Hunt said ‘Send her back’ is likely to become the new ‘lock her up’ – the slogan used by Trump supporters in the lead up to the 2016 presidential election, when crowds attacked Democratic rival Hillary Clinton.

Dr Hunt said the next election will likely be fought on the lines of race and immigration.

“This will be the new chant in place of ‘lock her up’ it will be ‘send her back’,” Dr Hunt said.

“And how Republicans and how the American public responds to that tells us less about Trump, more about ourselves.”