Multiple people have been killed after rockets struck a refugee camp near the Libyan capital Tripoli, while prisoners have escaped a nearby jail in a mass breakout.

Some 400 detainees escaped after a riot at a prison in the southern suburbs of the Libyan capital Tripoli, in a week of deadly battles, police said.

"The detainees were able to force open the doors and leave" as fighting between rival militias raged near the prison of Ain Zara, police said in a statement on Sunday, without specifying what crimes the escapees had committed.

Guards were unable to prevent the prisoners escaping as they feared for their own lives, the statement said. 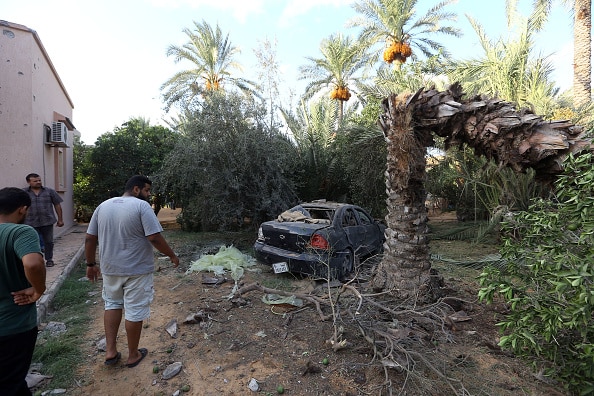 Libyans gather at the site of where a mortar shell landed in the capital Tripoli.
AFP

A police official contacted by AFP was unable to provide further details.

Most detainees at the prison have been convicted of common crimes or were supporters of former dictator Moamer Kadhafi, found guilty of killings during the uprising that toppled his regime in 2011

According to a health ministry toll, at least 39 people have been killed and some 100 injured since clashes, including rocket fire, broke out among rival militias Monday in suburbs south of Tripoli.

And on Sunday rockets hit a camp for displaced people in Tripoli, leaving at least two dead and five injured from the same family, according to emergency services and witnesses.

The camp is home to hundreds of displaced people from the Libyan city of Taourga who were forced into mass exile due to their support for Kadhafi.

A migrant who was being held in another detention centre got in touch. Here's what he said happened when the fighting began & those locked up were "released." #tripoli pic.twitter.com/Ytn27eFwk8

"Most of the families have left the camp fearing more rockets," Khaled Omrane, a camp resident, told AFP.

Up to 100 migrants missing in Mediterranean: Libyan Navy

According to emergency services, at least 23 rockets fell on the capital on Friday and Saturday causing fresh casualties.

Refugees inside the camp have told reporters guards assigned to watch over them had fled during the attack, taking provisions left by international aid organisations.

Libya declares state of emergency in Tripoli & abandoned refugees say buildings are smoking around them. This group includes 120 women & 20 children. When their guards ran away yesterday they also took provisions left by international orgs. pic.twitter.com/ittvkaOesu

The Government of National Unity (GNA) which is recognised by the international community on Sunday said it was declaring a state of emergency in the Libyan capital and its environs.

The Libyan capital has been at the centre of a battle for influence between armed groups since Kadhafi's fall and killing.