Two decades on from the historic referendum in Southeast Asia - which saw at least 1,400 people lose their lives and Australia forced to step in - SBS News meets an activist, a diplomat and a journalist who witnessed the crisis unfold.

The activist: Abel Guterres was in danger, fighting for independence

It’s the smoke Abel Guterres still vividly remembers. He was a 44-year-old Timorese exile and independence activist who’d just been fired at by militia forces on a tense drive to Dili, the capital of Timor-Leste.

He’d driven to the top of a hill overlooking the city. No one was answering his calls and he'd soon know why; the city was up in flames. It was 31 August 1999, and a historic referendum on independence had taken place a day earlier. Queues had formed from the early hours of the morning, with East Timorese people eager to cast their vote in the United Nations-supervised exercise. They were choosing between autonomy within Indonesia or independence.

On the day of the vote, Mr Guterres - who is now Timor-Leste’s ambassador to Australia, based in Canberra - recalls striking up a conversation with some young people in line. They told him while they were apprehensive about the violence and intimidation in the lead up to the vote, they were acting on behalf of relatives who had been killed. 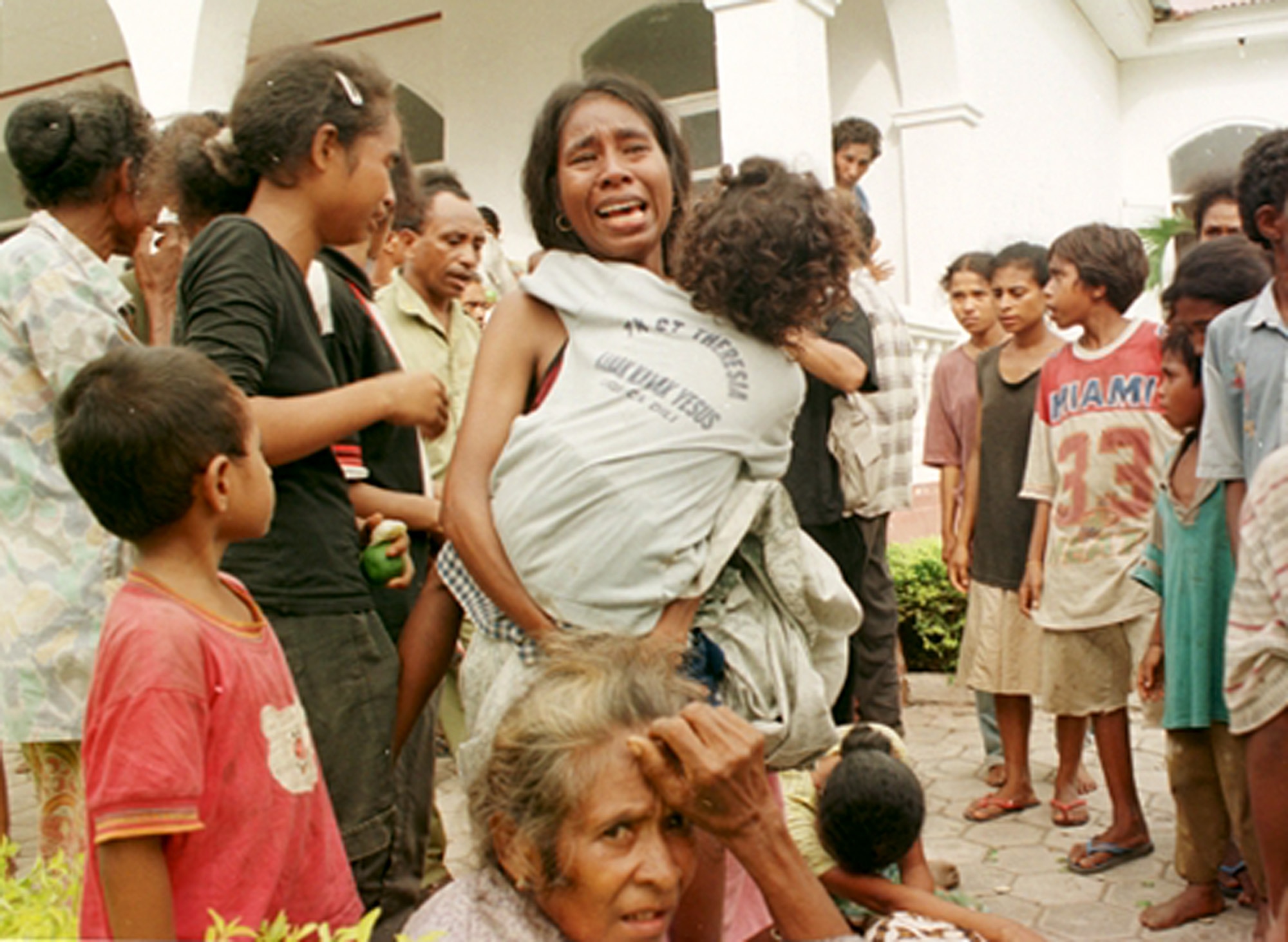 Locals in Liquica, west of Dili, in shock after being attacked by pro-integrationists in April 1999.
AAP

The mentality, Mr Guterres told SBS News, was "if they shoot us, so be it".

For hundreds of years, Timor-Leste had been occupied by the Portuguese, and in 1975, Indonesia invaded, sparking a 24-year-long independence struggle. It is estimated more than 200,000 people - a quarter of the population - were killed by fighting, famine or disease.

The mentality was, 'if they shoot us, so be it.'

The referendum showed a resounding 78.5 per cent of people were in favour of independence. But pro-Indonesia paramilitary groups had already begun attacking pro-independence civilians and setting fire to buildings. At least 1,400 people are thought to have been killed. East Timorese queue to cast their vote in Dili on 30 August 1999.
AAP

The events prompted neighbouring Australia to intervene with the deployment of a UN-authorised force known as INTERFET (International Force East Timor), consisting mainly of Australian Defence Force personnel, to establish and maintain peace.

Mr Guterres' connection with Australia was by chance. He grew up “poor but happy” in a rural mountain village in Timor-Leste and would later be teaching in the city of Baucau in 1975 when, out of curiosity, he and a friend decided to board an Australian military transport plane to Darwin. 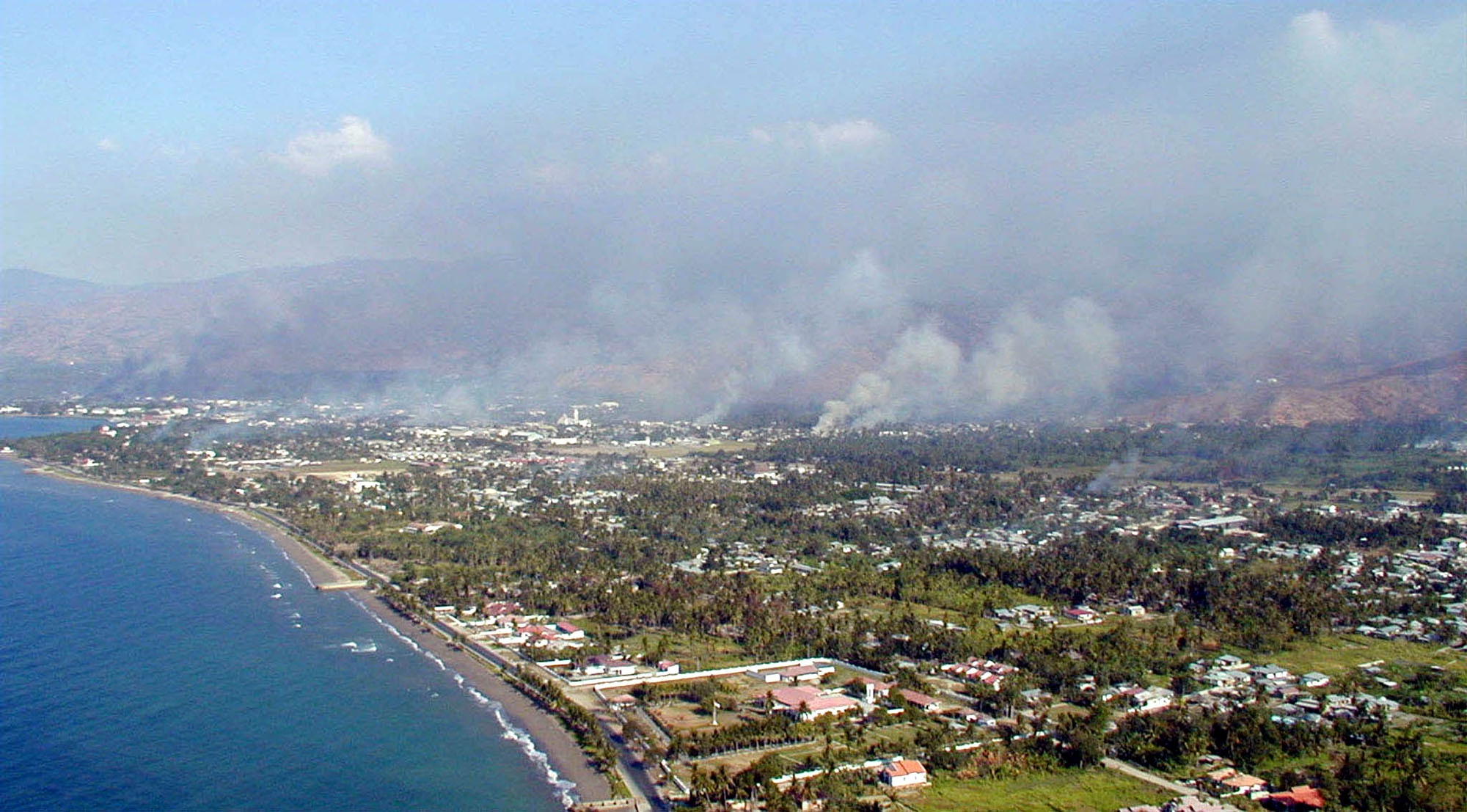 They intended to check out the city and return two weeks later, but a fortnight turned into 24 years after Indonesia invaded Timor in the December.

A vacuum left by the sudden departure of the Portuguese saw civil war erupt between those who favoured integration with Indonesia and those who longed for independence.

Mr Guterres found himself in Melbourne in the late '70s working as a tram and bus driver, not knowing what had happened to his family. Mr Guterres only intended to come to Australia for two weeks. He would later become a bus driver in Melbourne.
Supplied

“Those days I spoke very little English, but you get by. I was 19 at the time and learning a language was no problem,” he said.

In 1980, the 24-year-old was told Indonesian forces had killed 13 of his siblings and his father. The tragedy motivated Mr Guterres to continue campaigning for independence for Timor-Leste and he eventually became a spokesman for resistance movement Fretilin (the Revolutionary Front for an Independent East Timor). Blacklisted by Indonesian authorities, Mr Guterres' return to Dili in 1999 saw him use a fake name to enter the country. Despite the risks, he was determined to cast his vote. The worst-case scenario, he had decided, was that he’d be buried in his village and at least he’d be home.

“You’re waiting 24 years for this to happen, it’s like somebody lost in the desert and thirsting for water; you give everything,” Mr Guterres said.

The diplomat: Ambassador John McCarthy was trying to evacuate foreigners

In the lead up to the 1999 vote, pro-Indonesia militia waged a violent campaign against citizens in Timor-Leste which saw massacres in Dili and Liquica.

Australia’s ambassador to Indonesia at the time was John McCarthy.

The violent incidents, he said, made it clear the referendum process “wasn’t going to be a smooth one.” 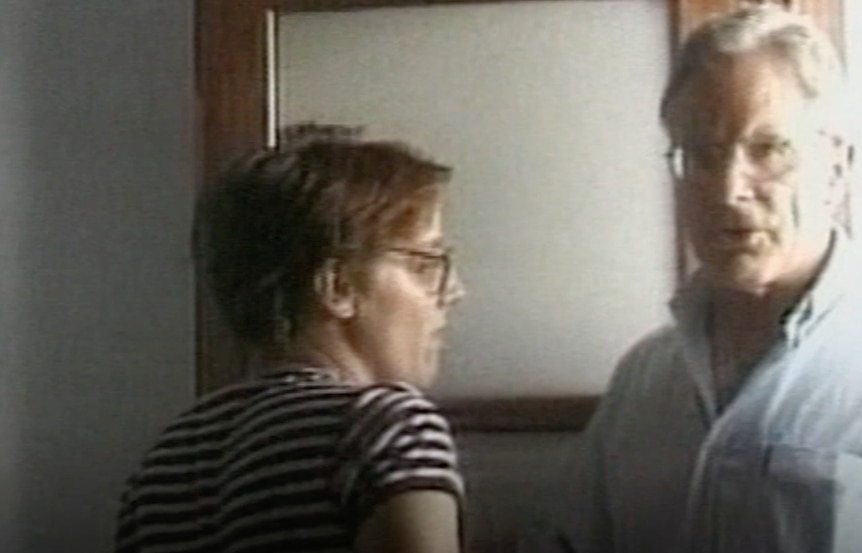 John McCarthy, right, then an ambassador, would make headlines for evacuating foreigners to safety in Dili.
SBS

Mr McCarthy was in Dili on the day of the referendum and remembers a mood of “pretty serious concern” taking hold amid fears of repercussions.

“I got very nervous when I heard that an Indonesian plane was being sent down to take out Indonesian journalists,” he said, fearing if they were being told to leave, the situation must be dangerous.

His concerns were justified, with Mr McCarthy describing “absolutely chaotic” scenes playing out before him. An anti-independence militiaman with a sword is seen in September 1999, as fires burn in the distance in Dili.
APTN/AAP

The now-retired Canberra-based diplomat has travelled across the world but regards the four years he spent in Jakarta from 1997 to 2000 as among the most memorable of his career.

It was Mr McCarthy who delivered the ‘Howard letter’ from then Australian prime minister John Howard to new Indonesian president B.J. Habibie in December 1998. The letter proposed autonomy for Timor-Leste and came at a fragile time in Indonesia. Mr McCarthy with then Timor-Leste President Xanana Gusmao in Dili, in 2002.
Supplied

Indonesia's President Suharto had been forced to resign and his successor set about quickly reforming his policies, which led to the independence vote being announced in January 1999.

The ambassador would go on to make international headlines when he was shot at by militia while driving around Dili in a white jeep with two Indonesian soldiers in the back, trying to ferry foreigners, including journalists, to safety. Luckily, he said, they missed. 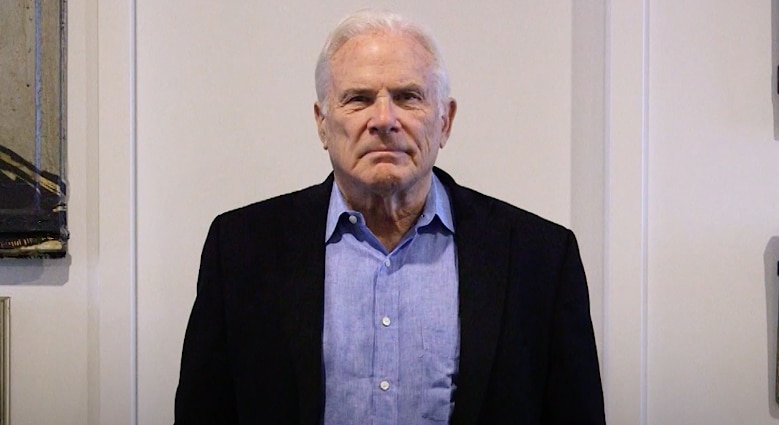 Mr McCarthy knocked on doors at the Turismo Hotel where many journalists and foreigners were staying, transporting them to safety, including to a UN compound.

“Normally an ambassador isn’t the person out ... on the ground like that,” he said.

“It had to be done, it’s part of the business really. We were trying to get people who were stranded in different parts of Dili to safety.”

The journalist: Vesna Nazor was reporting from the crisis for SBS

Vesna Nazor was one of the foreign journalists covering the crisis from Dili in August 1999.

The SBS reporter recalled a tense atmosphere and a climate of fear in the lead up to the vote, but also a distinct sense of anticipation. “[The 30th] was a day full of hope for a brighter future, but as it transpired the East Timorese paid a very high price for their independence,” Ms Nazor said.

Two decades after the bloodbath, she said the courage of the East Timorese people should be remembered.

The East Timorese paid a very high price for their independence.

“Many of them queued for hours in the hot sun and walked a very long distance to get to a polling booth.”

“They turned up despite the militia threats and violence.”

Reporting the story was difficult at times for journalists on the ground who were threatened by machete-wielding militia and had to negotiate roadblocks. Amid security warnings, as the situation deteriorated, Ms Nazor and other journalists left their hotel, which had previously been attacked by militia, to find more secure accommodation.

“I will never forget my final night in Dili,” Ms Nazor said.

“We stayed up all night listening to gunfire and basically the start of what was described as a 'scorched-earth policy', where the militia were on a bloody rampage.”

Like other journalists covering the events, Ms Nazor said she was conflicted about leaving behind those who couldn’t escape and leaving what was a major international story at the time. But the decision was made by SBS that it was no longer safe to stay, especially after the militia began targeting international journalists who were reporting live from the rooftop of a hotel in Dili.

“Many of us did want to stay and bear witness to what was going on,” she said.

“We’d gotten to know many of the local people and we could leave but they couldn’t. We really felt that very deeply and really felt terrible having to leave them behind knowing what was awaiting them.”

Ms Nazor and cameraman Michael O’Brien were on the last commercial flight out of Dili to Bali before the airport was shut down.

“It was absolute chaos at the airport and we didn’t think we were going to make it onto the plane,” Ms Nazor said.

Two decades on from the independence referendum, Mr McCarthy, who has worked with the Australian Institute of International Affairs, said his sense is that Australia had “made some mistakes” but is now moving in the right direction with Timor. 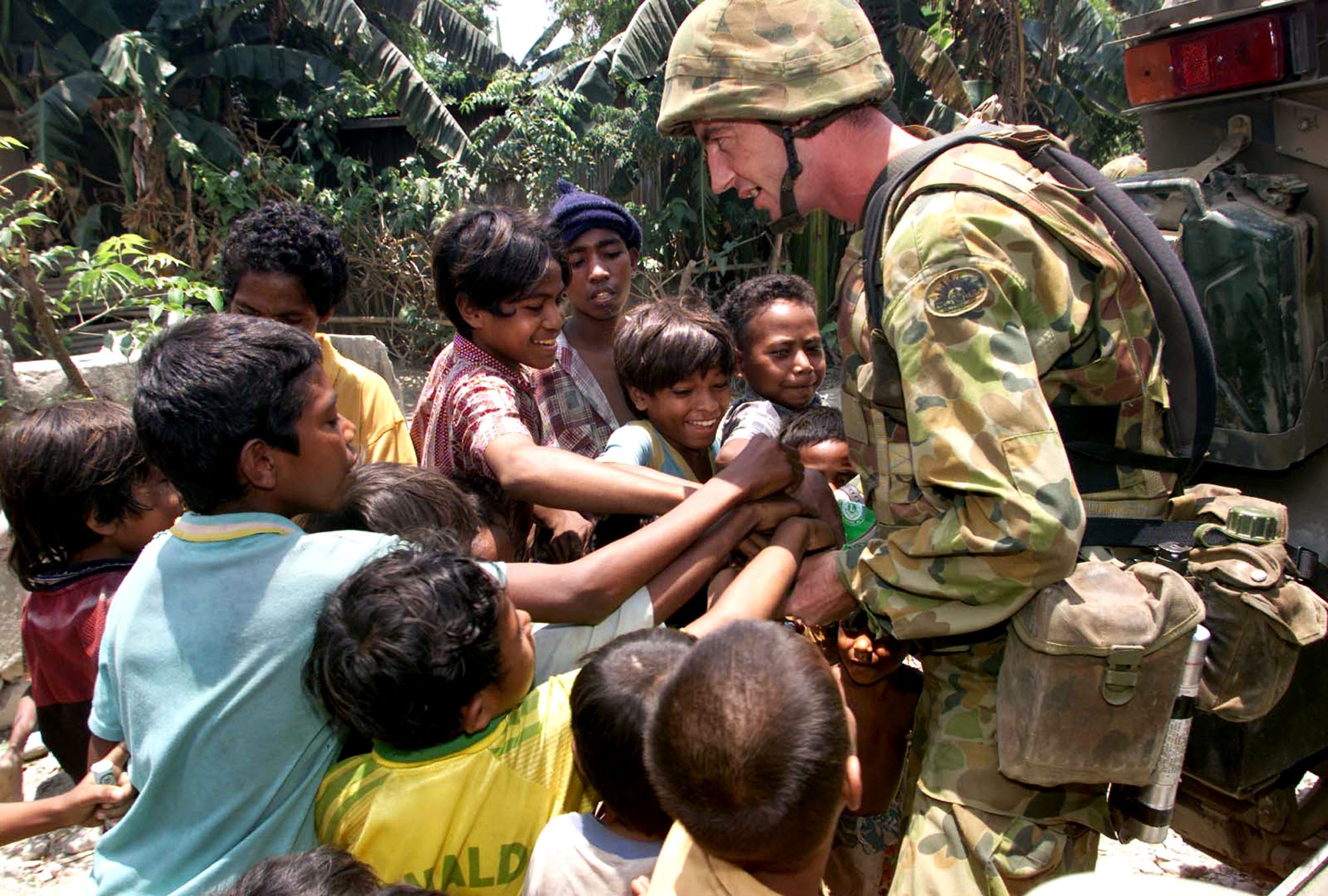 An Australian peacekeeping soldier with local children in Dili, in October 1999.
AAP

“I think what we probably needed to have done is put much more political energy into Timor since it became independent,” he said.

“East Timor is after all still a little country, [with a population of] only about one million people, we need to focus on it [and] they need to take us seriously as their first port of call.” The events of 1999 presented a unique foreign policy opportunity for Australia that Mr McCarthy regards as extremely significant.

“Most of our foreign policy has been tied in as a subordinate partner of the United States,” he said.

“[In Timor] we were the people that were looked to by everybody else for answers. Australia had a primary role, probably the primary role.” After casting his vote, Mr Guterres went to the mountains, not returning until the following day when he was chased by what he calls "drugged" militia.

He was evacuated on a plane to Bali but returned to Dili in 2002 when Timor-Leste would finally gain independence, to help organise the celebrations.

The activist became a successful diplomat, studying at Oxford and helped to start the ministry of foreign affairs in Timor-Leste.

Mr Guterres said while it was a bloody path to independence, everything that happened "was worth it".

“Australian solidarity has always been very important,” he said.

“We want Australians to also celebrate in this success story".