Immunocompromised Australians to get booster vaccines from next week 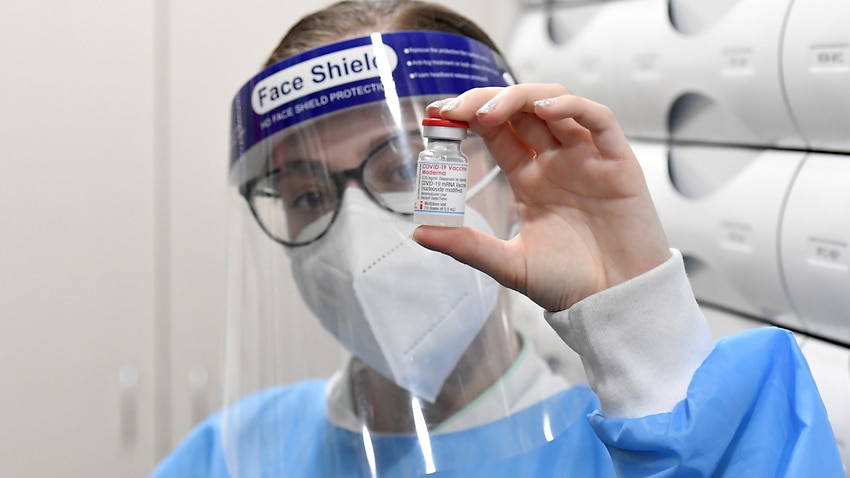 A pharmacist holds a vial of the Moderna COVID-19 vaccine in Canberra, September 23, 2021. Source: AAP

Australians with severely compromised immune systems will be offered a third coronavirus jab to maximise protection against the deadly virus.

The Australian Technical Advisory Group on Immunisation on Friday released new recommendations for all people aged 12 and above with certain conditions or undergoing specific therapies.

Up to 500,000 people will be able to receive a booster shot from Monday.

A Pfizer jab is preferred for people two to six months after their second dose with a minimum interval of four weeks in exceptional circumstances.

Severely immunocompromised people who received their second dose more than six months ago should get another injection as soon as possible.

ATAGI is expected to provide advice about booster shots for the wider population by the end of October.

Health Minister Greg Hunt confirmed that would be publicly released.

"We have over 150 million vaccines that are secured for the future and so we are able to implement that on the time frame and the urgency and immediacy that is suggested by ATAGI," he told reporters.

Booster shots will be made available to organ or stem cell transplant recipients, people with blood cancer and those receiving treatments that dampen their immune systems.

People living with HIV that is not controlled by therapy, receiving certain arthritis medications and those born with an immunodeficiency are also included.

ATAGI will monitor evidence around duration of protection for immunocompromised people and provide further advice about waning vaccine protection or risk from variants of concern.

"ATAGI will provide further advice on booster doses for healthcare workers, older adults and the general population separately," the expert panel said in a statement.

Chief Medical Officer Paul Kelly said the general principle would be for people to receive an mRNA vaccine like Pfizer or Moderna as their third dose.

"A third dose is likely, at this stage, to be the last dose we have to do," he said.

Mr Hunt has also spoken to Pfizer to again encourage the company to lodge an application with the Therapeutic Goods Administration for children aged five to 11.

Australia has now vaccinated more than 60 per cent of its population aged 16 and above, while 81.5 per cent have receive at least one dose.

The health minister said the latest increase took Australia past the United States, Israel and the European Union on first-dose coverage.

Victoria reported 1838 new COVID cases on Friday, the highest single-day total of any state or territory since the pandemic began.

There were five more deaths across the state and 11 in NSW, which recorded 646 new local cases.