The Kashmir Valley, a disputed territory that has led to war between India and Pakistan in the past, is once again bringing the two countries to the brink.

In the past few days, hundreds of Kashmiris have been arrested, accused of fueling the insurgency against Indian rule. India has moved thousands of new troops into the valley, where they have taken up positions in towns, along the highways and in snow-dusted apple orchards.

Families are fleeing border areas. Fuel and food supplies are running out. Pakistan and India are firing artillery shells. An Indian government directive ordered doctors to “gear up their Rapid Response Teams” for “any untoward eventuality.” In Pakistan, the military has shifted to high alert.

What are the chances of war?

Still thankfully low, most analysts say, because neither country really wants it. But both India and Pakistan are nuclear-armed, and any escalation between them sends jitters around the world. 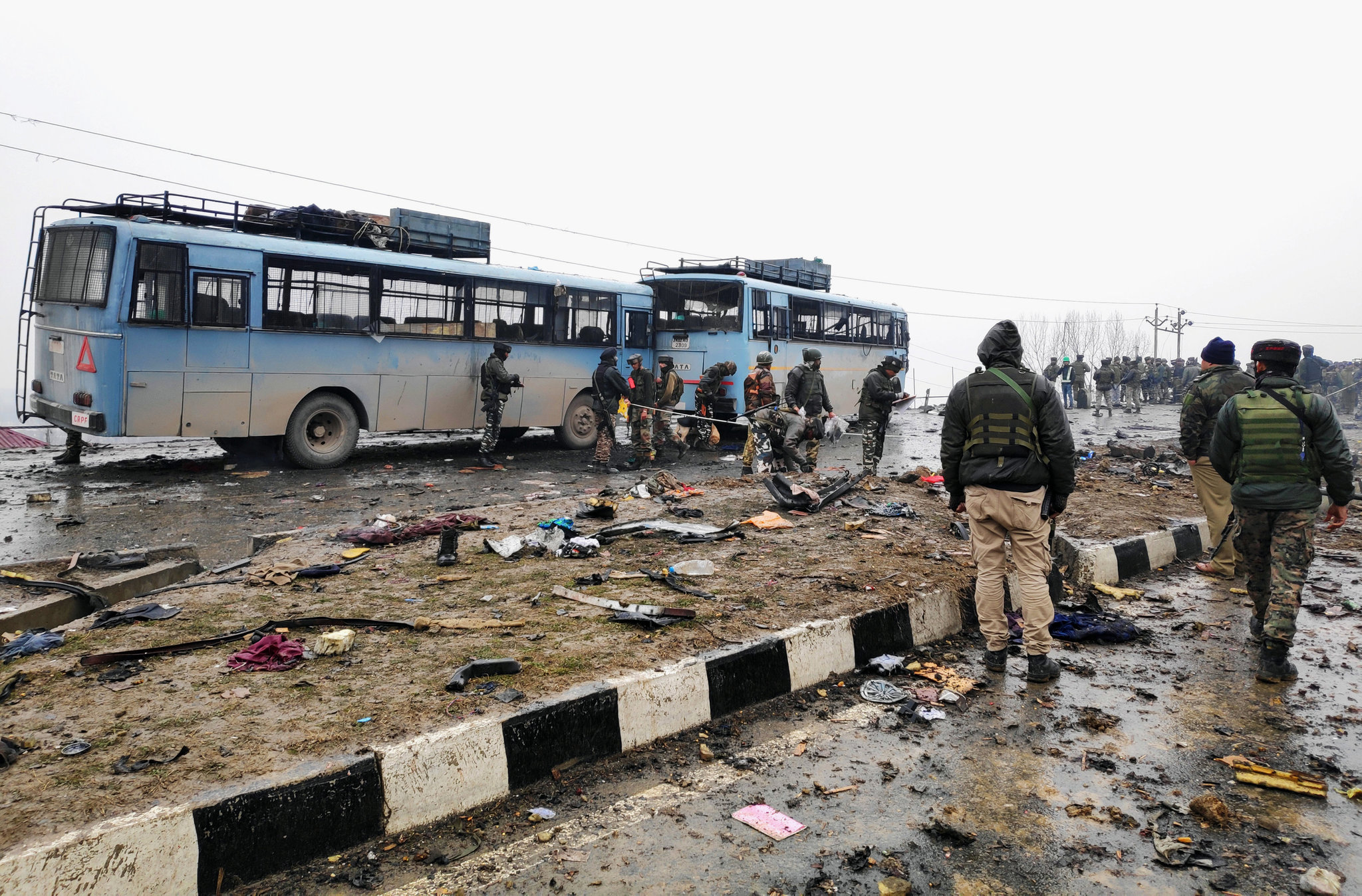 The site near Pulwama where a Kashmiri suicide bomber rammed a car packed with explosives into a convoy of Indian troops, killing at least 40.
Reuters

India believes it “can afford brinkmanship given its growing global influence,” said Zahid Hussain, a senior fellow at the Jinnah Institute, a Pakistani research organization. But, he warned, “reckless action could easily spiral out of control.” 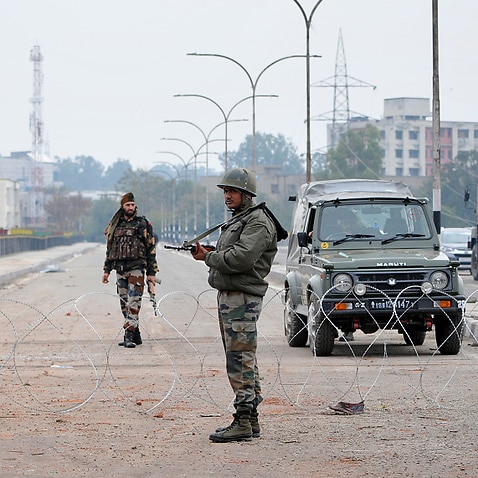 Only a few months ago it seemed as if India and Pakistan, who would otherwise be natural trade partners, were searching for détente, with Pakistani military officers quietly reaching out to their Indian counterparts.

But that changed in an instant Feb. 14, when a Kashmiri suicide bomber rammed a car packed with explosives into a convoy of Indian troops crossing the Kashmir Valley near the town of Pulwama, ripping apart a bus and killing at least 40 paramilitary police officers.

India, which has 1.3 billion people to Pakistan’s 200 million, has blamed Pakistan for the attack, one of the deadliest in Kashmir in decades. Tensions between the two countries are now reaching a level that analysts say is the most dangerous in years.

Western nations, including the United States, have urged the two sides to back away from conflict.

But the rivalry between India and Pakistan is so bitter and deep that such incidents quickly take on a volatile energy of their own that may be difficult to contain. The risk is compounded by election-year maneuvering in India, where Prime Minister Narendra Modi’s party is appealing to Hindu nationalism and urgently trying to avoid appearing weak.

“We should break Pakistan into three pieces,” said Baba Ramdev, a powerful Indian yoga guru who is known to be close to the government. 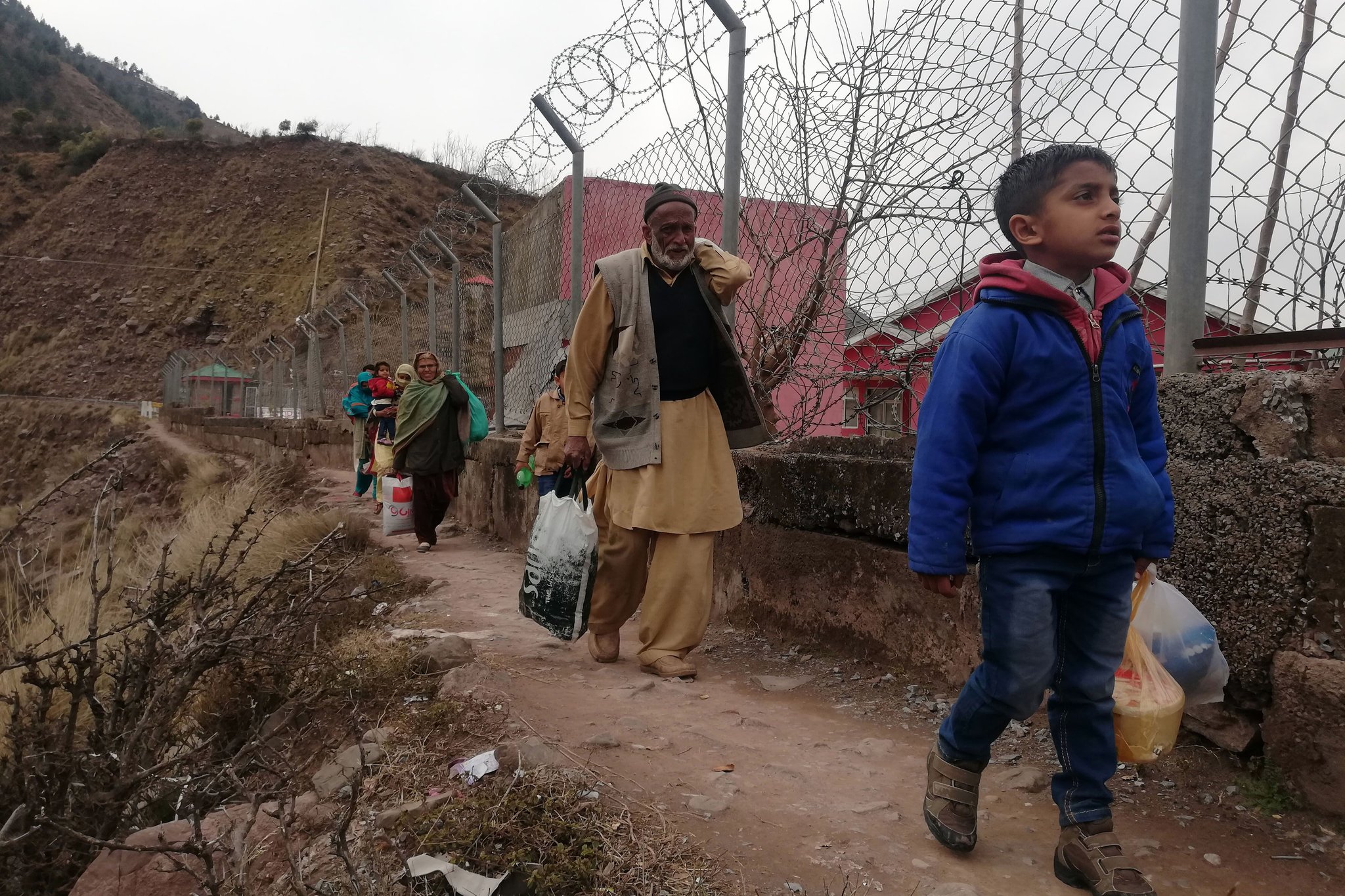 Locals fleeing their villages near the Line of Control, the de facto border between Pakistani- and Indian-administered Kashmir, in Chakothi, Pakistan
AP

Modi has promised a “befitting reply,” and while his generals have been calculating possible military reprisals, his government has searched for other ways to respond. Last week, Modi’s transport minister threatened to reduce the flow of water through some of its rivers to Pakistan, an arid, agriculture-dependent country.

Pakistan seems to be getting the message. Diplomatically, the momentum is behind India. The United Nations passed a resolution sympathetic to India, and Imran Khan, Pakistan’s relatively new prime minister, has begun to soften his stance.

Right after the suicide bombing, though he condemned terrorism, he warned India that if it attacked Pakistan, “we will not just think about retaliation, we will retaliate. There will be no other way.”

On Sunday, Khan modulated his tone, vowing to “immediately act” if India provided evidence of a Pakistani hand in the bombing. He asked Modi to “give peace a chance.”

Jaish-e-Muhammed, the militant group that claimed responsibility for the suicide bombing, has operated in Pakistan for years, and Western security officials say that Pakistani organizations continue to supply money and expertise to militants inside the Indian-controlled areas of Kashmir.

The suicide bomber was a young Kashmiri man who had spent his life inside those areas, bitter about India’s often heavy-handed displays of force. But he probably received some help.

Two Western security officials, speaking on condition of anonymity to discuss intelligence analyses, said that an experienced bomb maker from Pakistan most likely traveled across the border and built an unusually powerful bomb for the young Kashmiri to detonate.

Pakistan has denied involvement. But the country’s powerful military and intelligence services, often referred to simply as “the establishment,” have a long history of supporting Kashmiri militant groups — and others, like the Afghan Taliban — as proxies.

Many Indians point to the Mumbai attacks in 2008, in which militants who were widely linked to Pakistan killed more than 150 people. Few Indians are pushing for a full-scale war, but they are also tired of the violence.

“Indians have never really been so angry, and social media is fanning it even more,” said Syed Ata Hasnain, a retired Indian army general.

Adding to the unpredictability is Pakistan’s shakiness as a state, and the fact that its secretive security services appear to have lost control of some of the same militant groups they once nurtured. Pakistan also fields a large army, with thousands of troops at the border, backed by medium-range ballistic missiles that carry nuclear warheads, just like India’s.

“It’s a very, very bad situation and a very dangerous situation,” President Donald Trump said Friday. He indicated that the United States was talking to both sides.

Caught in the middle are 12 million people living in the state of Jammu and Kashmir, which includes the Kashmir Valley, a gorgeous, fertile landscape nestled in the Himalayas. 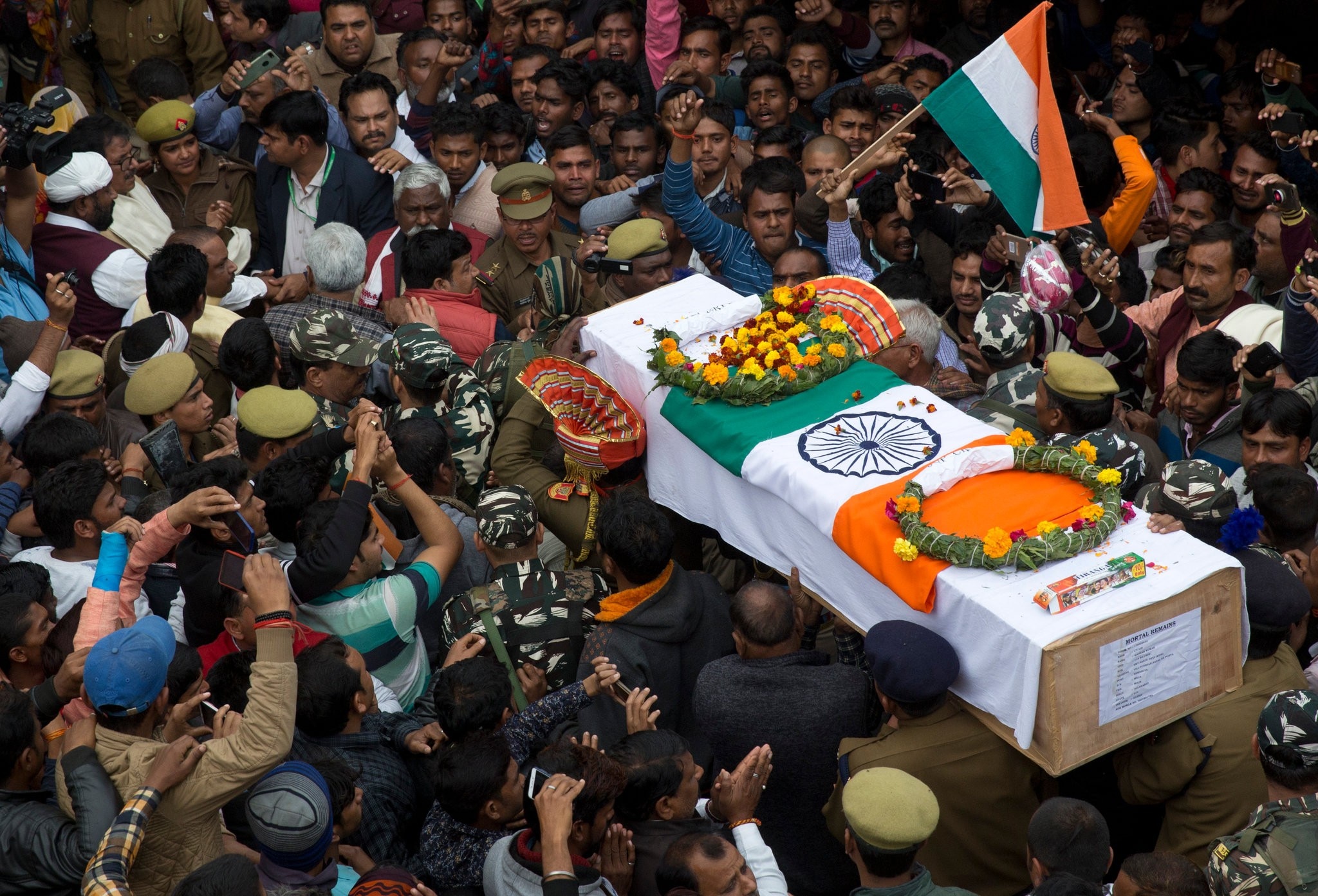 A funeral in Prayagraj, India, on Feb. 16 for one of the soldiers killed in the suicide bombing.
AP

The first war between India and Pakistan, right after their independence from Britain and partition, was fought over Kashmir. After the cease-fire in 1948, India was left in control of roughly two-thirds of the region, including much of the Kashmir Valley, while Pakistan administered the rest.

That agreement came with many caveats, and the Indian government at the time promised Kashmir special status and substantial autonomy.

Over the years, much of that autonomy has been stripped away. Pakistan, meanwhile, has never recognized India’s claims on Kashmir, and many Pakistanis believe that Kashmir should be part of their country because it is majority Muslim, like Pakistan. Pakistani officials have long called on the United Nations to support a referendum that would allow Kashmiri residents to choose for themselves.

This week, India’s Supreme Court is scheduled to hold a hearing on part of the law that gives Kashmir special status. Some of Modi’s political allies have been eager to take away the last of the special measures, such as rules that prohibit outsiders from owning land in Jammu and Kashmir, and a case has been brewing in court. Protests the day after the militant attack.
AP
READ MORE Many analysts said that if the Supreme Court diluted these special measures, Kashmir would explode in protests and the Indian government would respond with a deadly crackdown. The Indian troop movements in the past few days may be in preparation for such an uprising.

Many Kashmiris are now hunkered down in their homes, afraid to step outside. People also fear for their safety along the so-called Line of Control between India and Pakistan, where there are frequent exchanges of artillery and gunfire. Pakistani soldiers watching over potential Indian troop movements on Saturday at the Chakothi post, near the Pakistan-India border.
Getty Images

On Sunday, Karim-ud-Din Khan, an older herder, abandoned his home near the border after Indian and Pakistani troops began pounding each other’s posts. An artillery shell exploded in his courtyard, and Khan ordered his family of six to pack up.

The reason he left was simple: “It looked like a war might break out soon,” he said.