Aboriginal businesses and major sporting codes have been told to stop using the Aboriginal flag on their clothing designs because of a copyright-use agreement.

A non-Indigenous company has served a number of Aboriginal-owned companies with cease-and-desist notices for using the Aboriginal flag on clothing.

WAM Clothing, founded in 2018 by non-Indigenous duo Semele Moore and Ben Wooster, secured the exclusive rights to reproduce the flag on clothing after entering an agreement last year with Harold Thomas, the man who designed the Aboriginal flag in 1971. 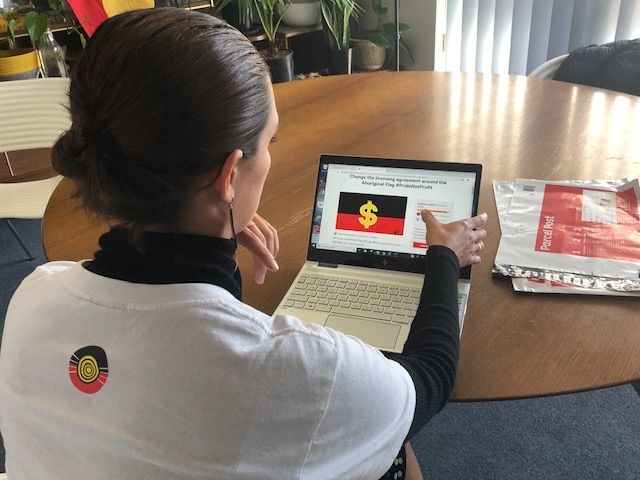 The Change.org petition to get the Aboriginal flag's licensing agreement changed.
SBS News

Aboriginal-owned business Clothing the Gap received their cease-and-desist notice on Thursday and started a Change.org petition in the hopes of lobbying government and having the licensing agreement changed, after Indigenous-owned newspaper, The Koori Mail, reported that a number of other organisations had received similar letters.

The petition has almost 20,000 signatures so far.

Clothing The Gap is a fashion brand owned by Spark Australia - an Aboriginal health promotion business.

The business is ‘profit-for-purpose’ and the money it makes goes back to the Aboriginal community through health programs.

Managing director Laura Thompson told SBS News the control of a non-Indigenous company over the Aboriginal flag market has to stop.

“It’s disappointing that the licensing agreement has gone to one company,” Ms Thompson, a Gunditjmara woman, said.

“When we found out it was a non-Indigenous company, well that was even more disappointing.

“What’s happening is all about control. WAM will have a monopoly on the market. People who want to buy from an Aboriginal organisation won’t be able to get anything with the flag.

“Our products also use the flag in a different way to what WAM does, it’s essentially reducing the variation people can get in a design sense too.” Companies who use the Aboriginal flag on clothing products have received cease and desist notices from the company who owns the exclusive rights.
AAP

But WAM Clothing management said in a statement that they are happy to work with other manufacturers who reproduce the flag.

"Until WAM Clothing took on the Licence for clothing with Harold Thomas, Harold was not receiving recognition from the majority of parties both here and overseas, who were producing a huge amount of items of clothing bearing the Aboriginal Flag," they said.

We’re pleased that Harold is now starting to receive his rightful recognition and subsequently royalties for his Copyright.

"In addition to ensuring Harold Thomas is paid his royalty, WAM Clothing is committed to supporting Indigenous communities, with an intention to share a portion of its profits to supporting grassroots programs and organisations."

Ms Thompson said she hopes a free licensing agreement will be struck so that anyone can reproduce the Aboriginal flag.

“If I was making merchandise with the Australian flag no one would care,” she said.

“But my flag I can’t use the same way. That’s really disappointing.

“We’re not alone in this fight, there’s bigger companies that have been issued with notices too.”

Ms Thompson has also written to Mr Thomas, seeking to enter a licensing agreement with him so Clothing The Gap can continue to reproduce the flag designs on their products. 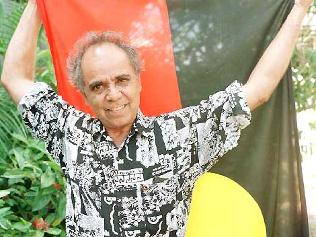 Harold Thomas with the Aboriginal flag he designed in 1971.
The Daily Telegraph

Mr Thomas said it is his ‘common law right’ to choose who he enters a licensing agreement with.

“It’s taken many years to find the appropriate Australian company that respects and honours the Aboriginal flag meaning and copyright and that is WAM Clothing,” the Luritja man said in a statement.

The Aboriginal Flag is doing its job as it was intended to do, to bring unity and pride to all Aboriginals.

“At times we get the few who snigger and are disenchanted. I can’t satisfy all black people who wish to break up the Aboriginal unification.”

Dreamtime Kulilla Art’s Michael Connolly has also been given a cease and desist notice.

He said he’s taken the Aboriginal flag off his social media and his business branding, and apologised to WAM and Mr Thomas, but he’s frustrated by the situation.

“We’re sorry for what this situation has become but WAM and Harold Thomas need to come to the table now to speak with Aboriginal people,” Mr Connolly - a Kulilla and Muruwari man - said.

The Aboriginal people have spoken and we need our flag to be our flag and our products to support our communities. Michael Connolly wants Aboriginal people to be able to use the Aboriginal flag in whatever way they want to promote their culture.
Supplied
Mr Connolly said the flag is an important symbol to Aboriginal people, and they shouldn’t have to ask permission from a non-Indigenous company to use it.

“Our people are in pride to carry that flag,” he said.

“Now these people are saying ‘no you can’t put this on garments or you can call us and ask permission to use it’.

“Here we are as Aboriginal people who have been recognised under the Aboriginal flag design, have to ask ‘well, can we use that?’

“We want the copyright to protect it but we as Aboriginal people want to be able to, without having to pay any money, do what we want to do to promote our flag.”