As crews continue to battle out of control bushfires in Australia, this man and his community are walking the streets to help those on the front line.

When Arif Nabizada finishes work at five o’clock, he doesn’t go straight home to his family. Instead he, and a group of his friends, pound the pavement and door knock local Hazara businesses in Western Sydney to collect money for the Rural Fire Service (RFS).

Nabizada belongs to the ethnic minority Hazara group, native to the Hazarajat region in central Afghanistan. He fled the country when the Taliban invaded his village and gave everyone an ultimatum – leave or be killed.

Nabizada, who eventually made his way to Australia in 2005, knows what it’s like to endure hardship.

“We came from a fire zone country; that fire was in terms of bullets and guns and suicide attacks, here it’s a physical fire, but we know the pain of the people who lose their properties.” As soon as the fires in NSW began the Kateb Hazara Association, which Nabizada is a part of, sprang into action to raise money for the RFS. Their first online fundraising appeal resulted in an $18,250 donation – but Nabizada and others knew they could do more.

“A lot of people [from my community] couldn’t make donations. They are illiterate in their first language, and obviously in their second, English, and they’re not confident making those online donations, they don’t trust social media.”

So Nabizada, and his local community members, came up with the idea of taking stage two of their fundraising appeal door to door.

“We have to go after hours. I am working until five o’clock in the office, one of my friends stopped work to really get behind the cause, but it’s a challenge in terms of timing.”

The group of about four to five men have been met with praise and thanks from those in the community who Nabizada says are all willing to help out. 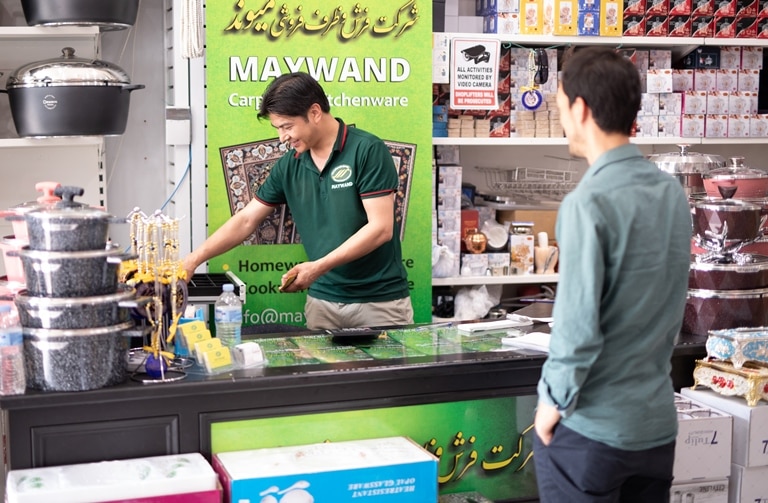 Arif says he knew going door to door would result in more donations for the RFS.
Saber Baluch

“They really appreciate us for what we are doing. For them, like us, they have all these opportunities here in Australia so they say “OK it’s time for me to give back, why shouldn’t I?” they don’t hesitate for a minute.”

While we’ve seen million dollar donations from celebrities like Elton John and the singer Pink, everyday community members across Australia are digging deep.

Nabizada says so far the second stage of their appeal has raised around $13,000, but he and his friends will continue to walk the streets of Western Sydney until they feel they’ve reached everyone they possibly can – to give back to the country they call “the land of opportunities.”

“We want to give back to the country that we owe, Australia is our home, we feel it’s our home, so at the time of the hardship we want to show that we are part of this country, we have a sense of belonging.”