A Middle East politics expert says while direct conflict is unlikely, tensions between the US and Iran are set to continue.

The death of Iranian commander Qasem Soleimani by a US airstrike has triggered fears of an outbreak of war between the US and Iran.

Iran has already delivered on its threat to retaliate and avenge the death of Soleimani by firing missiles at American airbases in Iraq. 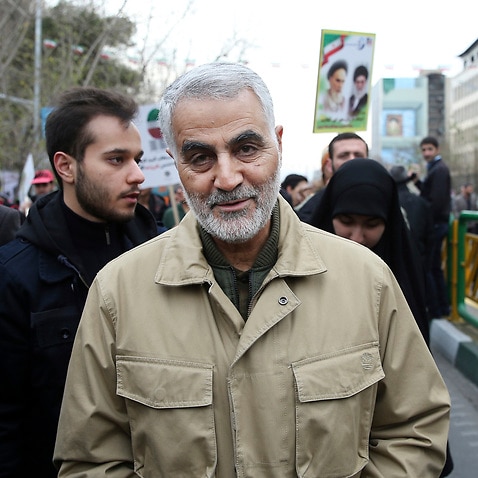 Who is Qasem Soleimani and why is his death so significant?

However, the prospect of a direct military confrontation, for now, has diminished after US President Donald Trump said on Wednesday that the US response at the moment would be limited to sanctions against Iran.

Mr Trump on Wednesday said he is confident Iran is "standing down" and that "American strength, both military and economic, is the best deterrent".

Professor of Middle East politics Shahram Akbarzadeh at Deakin University said he believes a direct military confrontation is unlikely, even in the longer-term. "That would be devastating for Iran. The Iranian economy is in a shambles, following sanctions. It cannot sustain a war effort. Iranian armed forces are in no state to really fight US armed forces directly and that is Iran has been investing in asymmetrical warfare," he said.

"That is why Iran is building up its links and contacts with Shia militia and sponsoring them because Iran is very much aware of its own limitations."

How did we get to this point in US-Iran tensions?

Professor Akbarzadeh said Iran's policy to destabilise and cause uncertainty in the region will continue in the aftermath of the 2015 Iran nuclear deal, which the US eventually exited in 2018 to instead impose sanctions that have crippled Iran's economy.

"So all those issues will continue. Many of the regional powers like Saudi Arabia and Israel would be very unhappy with that and will continue to lobby the US to contain Iran."

Tensions between the country have had numerous flashpoints since 2015, with the latest to occur at the end of last year when President Trump almost called in a military attack on Iran, in response to the nation's September strike on an oil facility in Saudi Arabia.

The two countries have been enemies since Iran's 1979 Islamic Revolution and the following US Embassy takeover and hostage crisis. Fifty-two American diplomats and citizens were held hostage by Iran for 444 days.

It is an incident Mr Trump has never forgotten.

"I’ll never forget when Iran had the hostages. And (US President) Jimmy Carter was helpless. It was just sad. And Ronald Reagan came in and he said those hostages will be delivered immediately," he said in a 2010 interview with ABC News America's George Stephanopoulos.

He again referenced the 52 hostages this week, threatening to strike 52 Iranian sites.

Just how unprecedented was it for the US to authorise an airstrike to kill Qasem Soleimani?

In the immediate aftermath of Soleimani's death, Iranian President Hassan Rouhani said the assassination was a "big mistake" and a crime comparable to other US transgressions in the past.

"It is similar to the 1953 coup [by the CIA], it is like the downing of the [Iranian] passenger airbus in the Persian Gulf [in 1988]. These are crimes by the United States that will never be forgotten in Iran's history," he told his nation. Flowers and posters at the gate of the Iranian embassy in The Hague, Netherlands.
AAP

The US claims it acted in self-defence by acting on intelligence of an imminent attack against Americans in Iraq and other locations in the Middle East, planned by Soleimani. Evidence for those claims has not been produced.

"I don't know if Trump has a really clear Middle East strategy. The administration seems to stumble from one error to another, from saying one thing and doing another thing. It seems to be a pattern. There is no rhyme or reason in it."

Professor Akbarzadeh says he also sees the irony in how Soleimani, who aided the US effort to liberate Mosul from the clutches of ISIS, ended up being killed by a US airstrike.

"Soleimani was a very important figure. Soleimani was celebrated in Iran as a national hero because of his role in mobilising Shia militia in Syria, in Iraq and because of his work with Hezbollah in Lebanon - all of which were instrumental in defeating ISIS.

"In fact for a while, the militia who were prepared by Soleimani were fighting on the side of the US. The liberation of Mosul from ISIS was joint effort by the militia and the US.

"So it is quite ironic that the US decided to kill general Soleimani."

Could the matter of the Soleimani killing end up in an international court?

Iran's UN ambassador, Majid Takht Ravanchi, said the targeted killing of was "an act of aggression" in violation of international law.

"By targeting one of our top generals in contravention of US international obligations, using the airspace of Iraq, a sovereign country then the prime minister of that country has condemned this act of aggression by the US," he told CNN.

"They should expect anything as a result of this aggression."

International law expert Oona Hathaway said the argument of self-defence is not supported by the available facts and the US action is "legally tenuous under both domestic and international law".

The legal justification for the President's strike on Soleimani continues to fall apart: The more we learn, the clearer it becomes that there was no "imminent attack" justifying a strike without consulting--or even informing--Congress. https://t.co/90xMVrWSV8

Article 99 of the UN Charter could be activated by the UN Secretary-General referring the matter to the International Criminal Court in the Hague.

Under Article 35 of the same charter, Iran or Iraq could refer the dispute to the UN Security Council.

However, the permanent members of the UN Security Council - United States, China, France, Russia and the United Kingdom - could veto any referral to the ICC. 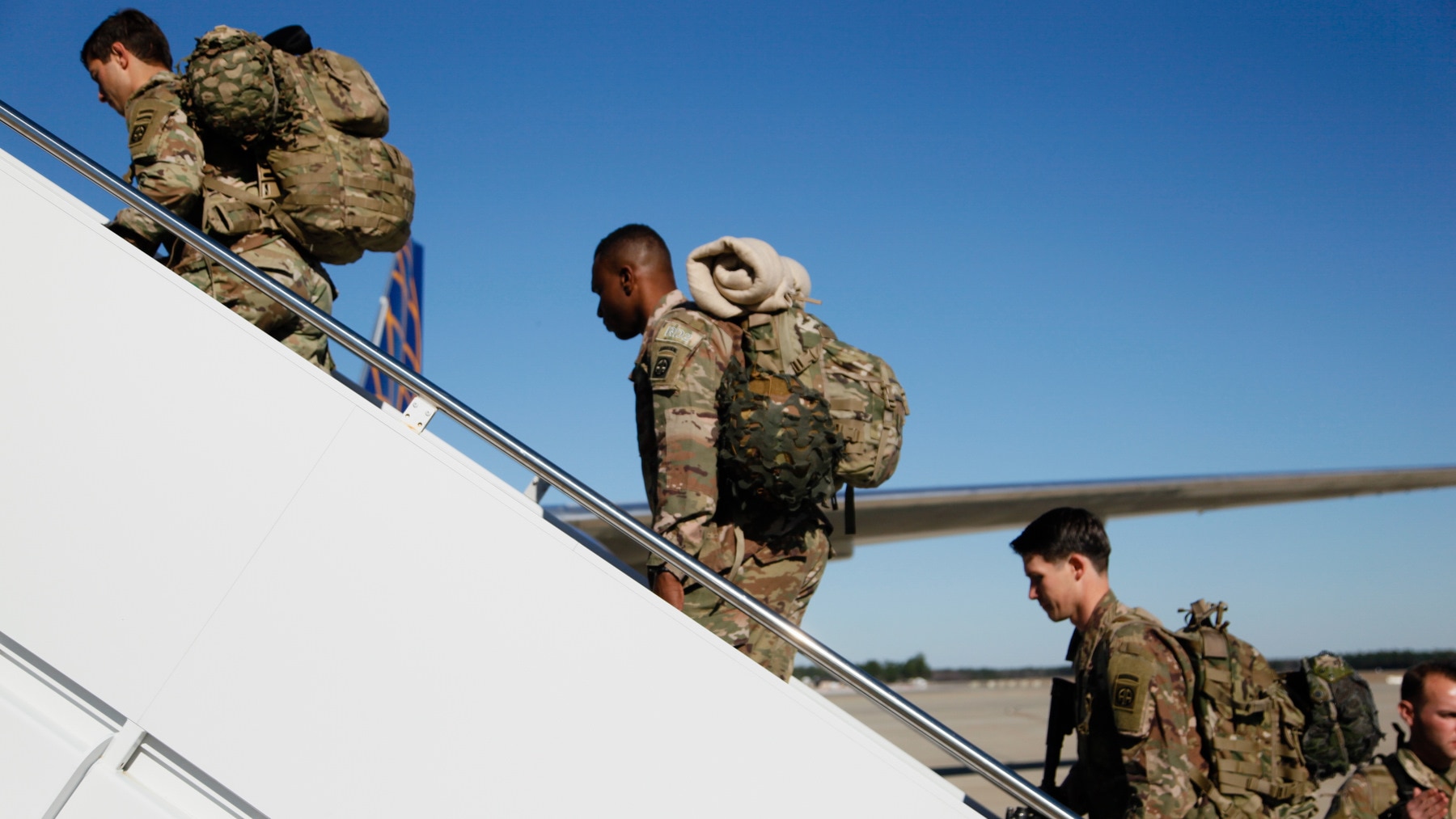 US paratroopers board an aircraft bound for the US Central Command area of operations in the Middle East, from Fort Bragg, North Carolina, 5 January 2020.
US Army

Professor Akbarzadeh said there could well be a case to pursue by Iran in the international courts, referring to the International Court of Justice case Iran pursued over the US shooting down an Iranian passenger plane.

"Iran took the United States to the Hague following the US shooting down of a passenger airline over the Persian Gulf in 1988. Iran won the case and the US paid $60 million damages to the families of Iranian victims," he said.

"The US admitted it was at fault. So that was an open and shut case.

"With this one, the US insists it was doing this in self-defence. And I don't see how the US is going to accept any ruling that the court might make."

The White House has avoided using the term "assassination" to describe the killing of Soleimani. An executive order signed by then-President Ronald Reagan prohibits the US military from conducting an assassination and the use of the word "assassination" has implications under international and humanitarian laws. 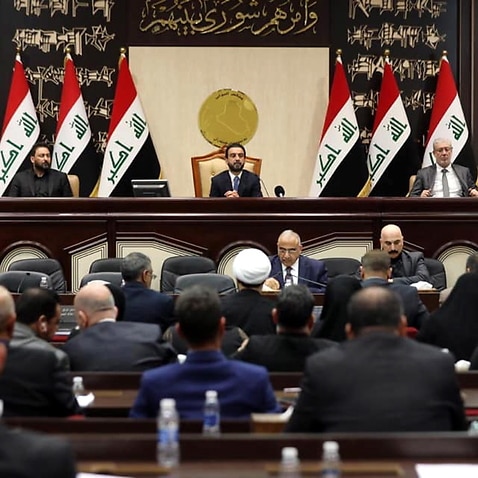 The United Nations special rapporteur on extrajudicial executions, Agnes Callamard, has called for an independent investigation into the legality of the targeted US drone strike against Soleimani.

The moral voice of UNSG @AntonioGuteres matters a great deal in times of crisis. But messages and bilateral exchanges are not enough. Activate Article 99 of the UN Charter; establish an impartial inquiry into lawfulness of #Suleimani killing and events leading up to it. https://t.co/pxnD9Sw81W

She said such an action is likely a violation of international law.

"Lawful justifications for such killings are very narrowly defined and it is hard to imagine how any of these can apply to these killings," Ms Callamard said.

She said the targeting of Soleimani “appears far more retaliatory for past acts than anticipatory for imminent self-defence.”

Are we headed for a war between Iran and the US?

MrTrump warned that a list of 52 Iranian cultural sites would be hit in response to any retaliation against Americans over the death of Soleimani.

Iran is talking very boldly about targeting certain USA assets as revenge for our ridding the world of their terrorist leader who had just killed an American, & badly wounded many others, not to mention all of the people he had killed over his lifetime, including recently....

He has since avoided repeating those threats, saying more economic sanctions would be imposed.

"The civilised world must send a clear and unified message to the Iranian regime. Your campaign of terror, murder and mayhem will not be tolerated any more. It will not be allowed to go forward," he said at the time.

Professor Akbarzadeh dismissed the idea that World War III is on the cards, saying direct military conflict would be "suicide" for Iran. "We haven't seen that [war]. And even if there was direct confrontation between Iran and the US. This wouldn't be World War III because Iran can't really match US firepower. And Iran does not have any nuclear bombs," he said.

"Russia and China, who are allied with Iran and who have been very upset about the whole situation, are not committed enough to Iran to engage in direct confrontation with the United States.

What will be the repercussions for Iran’s military, now that Soleimani is dead?

He has vowed to expel the US from the Middle East.

"We promise to continue down martyr Suleimani's path as firmly as before with the help of God, and in return for his martyrdom we aim to get rid of America from the region," he told followers.

He inherits the existing networks and institutions of Iran's military: the Revolutionary Guard's Quds Force, an expeditionary arm of the paramilitary organisation answerable only to Iran's Supreme Leader Ayatollah Ali Khamenei, has long cultivated relationships with proxies in Iraq, Lebanon and Yemen. Professor Akbarzadeh said Iran's military policy and machinery is not going to grind to a halt with the death of Soleimani.

"Iran sees itself surrounded by the United States military bases. There are military bases dotted across the region from Afghanistan to the UAE [United Arab Emirates] to Bahrain to Kuwait, Iraq. And this has been going on for years," he said.

"So Iran can clearly see that it cannot directly challenge American military might. But it can make trouble for states allied with the United States - and that is through sponsoring proxy organisations."