Prime Minister Scott Morrison keeps telling us Australia will meet our Paris Agreement targets “in a canter”, but will it be a real reduction in emissions or simply an accounting trick?

Addressing climate change has dominated the prime minister’s agenda this week with a series of announcements revolving around reducing Australia’s emissions.

The flurry of announcements is a sign the Coalition has realised the issue is top of mind for voters and traditionally-conservative voters are despairing at the government’s lack of action on climate change.

As Prime Minister Scott Morrison defended the government’s record on climate change, he repeatedly assured the public Australia is on track to meet our Paris Agreement targets. 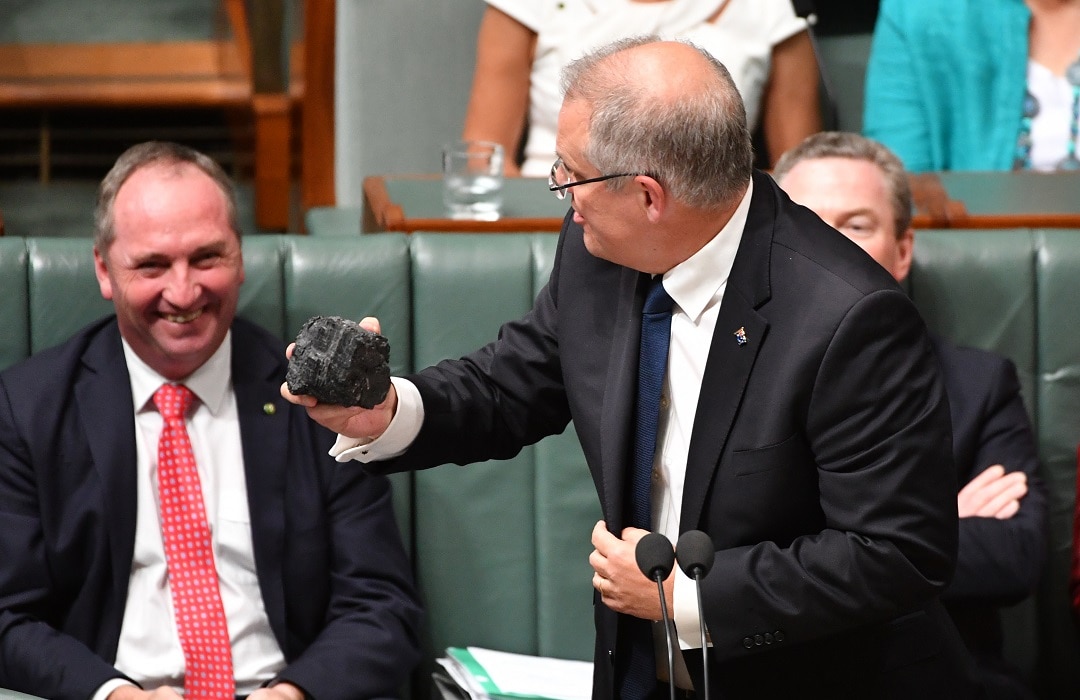 As Treasurer Scott Morrison brought a lump of coal into Parliament.
AAP

Under the global pact, Australia has set a target of reducing carbon emissions by between 26 and 28 per cent by 2030, compared to 2005 levels.

In Mr Morrison’s words Australia will do that “in a canter” - and that was even before this week’s climate change policy announcements.

But many economists and scientists don’t share his optimism, saying the government is relying on an “accounting trick” rather than real reductions.

The government’s calculations include surplus credit achieved by coming in under its allowed emissions of the soon-to-be-defunct Kyoto Protocol.

While other countries including New Zealand and Germany have ruled out doing the same, the strategy effectively halves Australia’s target without any new action to reduce emissions. 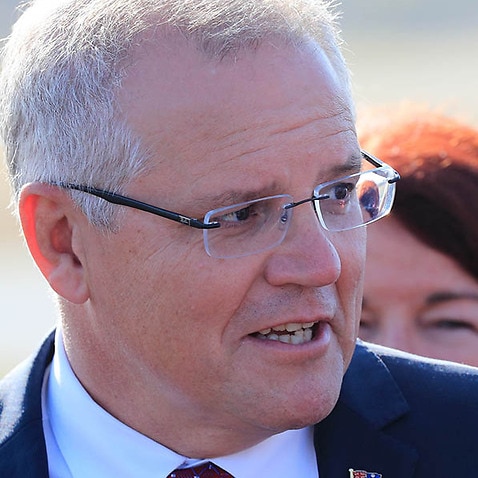 “In this case, it’s clear that there was no action, it was the result of negotiation. So there’s been no benefit to the atmosphere,” he said.

On paper the credits reduce Australia’s emissions by 367 megatonnes, but Mr Hare said it doesn’t actually help the climate. “It annuls action or avoids action. There’s no actual benefit to the environment. In fact, it essentially licences Australia to continue to increase its emissions," he said.

The Paris Agreement rule-book hasn’t yet determined whether Kyoto credits will count, but Coalition Senator Simon Birmingham told an estimates hearing last week the use of the credits “appears to be a consistent application of the rules and definitions”.

Labor is opposed to using the credits towards its more ambitious target of a 45 per cent reduction on 2005 levels by 2030, but says it will consider advice on how they should be accounted for.

How big is the task with or without Kyoto credits?

The  government’s own projections have revealed Australia is not on track to meet its emissions target.

According to the government’s figures, Australia is set to produce almost 700 megatonnes more than the 4,800 megatonnes allowed in 2030.

Half of that abatement task could be wiped out by the Kyoto credits which the Environment and Energy Department’s December report put at 367 megatonnes, leaving about 328 megatonnes to shed. Australia's Prime Minister Scott Morrison has given the thumbs up to a further $1.3 billion expansion of Snowy 2.0.
AAP

But Frontier Economics Climate and Energy researcher Matt Harris shares the PM's optimism, citing the unreliability of the projections.

He said the government may take credit for the apparent reduction, but it is more likely that the original projections were far too conservative.

“A lot of those cuts are forecasting errors and they’ve just overstated the task in the first place,” Mr Harris told SBS News. 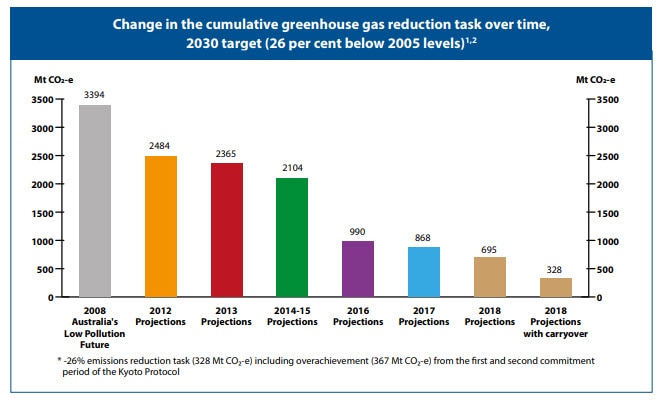 The size of the abatement task has reduced each year.
Environment Department

He points out that the projections fail to take into account the planned closures of coal power plants and state-based policies designed to boost renewable energy.

The government’s $2 billion injection into the Tony Abbott-era Emissions Reduction Fund, renamed as the “climate solutions” package is expected to deliver another 150 megatonnes of abatement.

On that basis, Mr Harris expects the current projections will again prove to be way off and Australia will achieve its abatement task even excluding Kyoto credits.

Most worrying for climate scientists is that emissions have been rising since 2014 and - in many sectors - they’ve been going up for longer.

“It’s very clear that Australia is not making progress towards reducing its emissions at all,” Bill Hare said. “Outside of the power sector which is experiencing a rapid uptake of renewable energy, all other sectors are increasing such as transport, industry and so on. That reflects a complete lack of policies and actions federally.”

“It’s simple really, emissions should be going down, they have to be going down for us to meet our Paris Agreement targets and they’ve been going up for years.”

If it’s as easy as Scott Morrison says, should we set bigger targets?

“Everyone gets in a fuss that we’re not going to hit the target as opposed to debating what the target should be,” Mr Harris said. 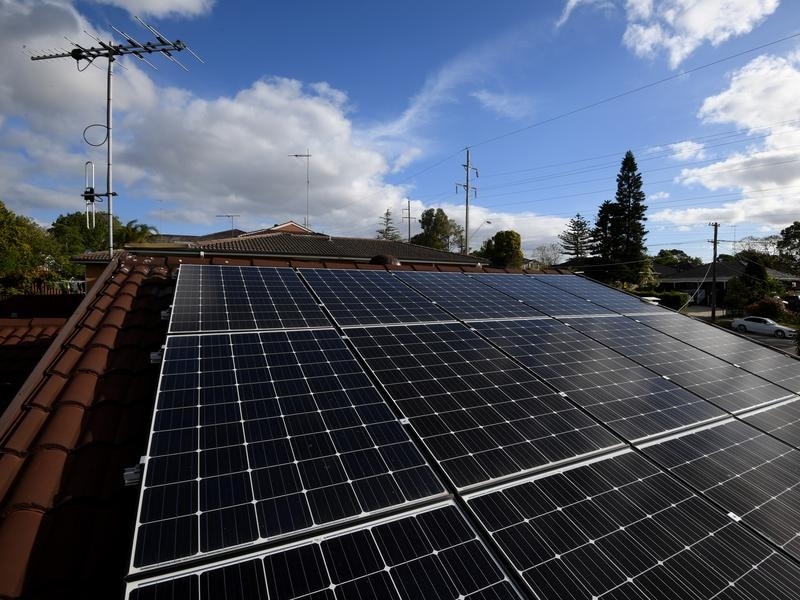 Electricity emissions are expected to drop significantly as the uptake of renewable energy continues.
AAP

Given the uptake of renewable energy will significantly cut electricity emissions he said Australia can afford to be more ambitious, but the negative predictions are holding us back.

“It makes it harder to argue for harder targets because everyone thinks it’s hard enough meeting this target and people think it’s going to be costly to meet this target whereas the reality is they’re  just over-forecasting in the first place.”

Despite being pessimistic about the projections, Tim Baxter said there’s no reason why Australia can’t become an industry leader in climate change abatement technology.

“We’re blessed with all these opportunities to reduce our emissions and we’re just wasting time at the moment and its time we don’t have if we want to get to a safe climate," he said.

Climate scientists point to practical measures such as introducing fuel efficiency standards, electric vehicles and moving to 100 per cent renewable energy that would make a significant dent in our future emissions.