Thousands of people have turned out across the country to call on the Queensland and Commonwealth governments to stop the proposed Adani coal mine.

"People really are against this coal mine. We need to send a message to Malcolm Turnbull that funding a giant coal mine in Queensland just makes no sense," said organiser Blair Palese the CEO of lobby group 350.org.

"It's not time for more coal, it's time for the solutions to climate change."

Stephen Lightfoot and his partner Elizabeth Hess brought their two young sons to the beach protest.

The told SBS World News that they feared for the future of the region if the coal mine is built.

"I think anything you can do might help to stop this, so at least we're trying to do something," Ms Hess said.

45 protests in 'national day of action'

Meanwhile hundreds of demonstrators gathered outside Parliament House in Canberra to voice their opposition to the Carmichael mine as dozens of similar rallies took place across Australia on Saturday.

"The mine is just going to ruin everything, the water, the reef, the farming land, and also we're lending them $1 billion and I cannot believe we can't spend that money on jobs in other areas like renewables," Michele Smith told AAP in Canberra.

Fellow protester Kathy Kituai said she was sceptical about what the state and federal governments stand to gain from the "insane" project, while Lois McRae is worried about the irreversible damage it may cause.

"It is ludicrous to propose this mine and it has got to be abandoned," Ms McRae told AAP.

Those who gathered in Canberra waved placards and chanted slogans before heading off on a march, while people in other locations created human "Stop Adani" signs.

Scores of red-clad protesters also turned out at Brisbane's Crosby Park on Saturday afternoon to create a human sign spelling out "Stop Adani" as part of a National Day of Action.

"However, they face an even bigger threat in the form of the Adani coal mine," he said.

He said "huge numbers" of coal ships would move through the Great Barrier Reef if the mine goes ahead, posing a serious threat to the whales' birthing grounds.

"Not to mention the burning of fossil fuels is having a catastrophic impact on Antarctica and the krill numbers, the whales' food," he added.

The national rallies come as new polling shows more than half of Australians oppose the central Queensland mine.

Two-thirds of people also believe the Queensland government should veto a proposed $1 billion Commonwealth loan for a rail line to the Carmichael mine.

"Not only the people that are working in the coalmines will end up with black lung, but it's coming up in our children as well," Ms Forester said.

"So it's not just about the environment, it's about the cost of human lives that are happening up there. 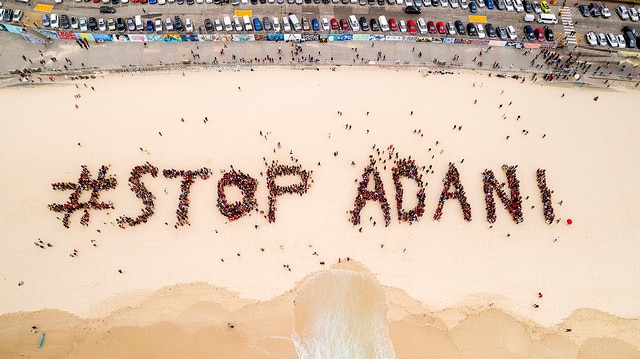 At least 2000 people spelled the words 'Stop Adani' at Bondi beach in Sydney. It was one of numerous protests across the country against the proposed coal mine. (Supplied)
SUPPLIED

Almost 2200 people were quizzed in the ReachTel poll this week.

Respondents were told Adani wanted to build a new coal mine in Queensland, which the Indian company said would create local jobs.

They were also told concerns had been raised about the company's corporate track record and the environmental impact of the mine, before being asked if they supported or opposed the project going ahead.

Almost one in five (18.4 per cent) were undecided.

Support was highest among Australian Conservatives, Liberal and One Nation voters, while Greens, Labor and Nationals voters were most keenly opposed.

"And I have to say if he doesn't respond to it (the protests and figures), it will be goodbye Malcolm," added businessman and Australian Conservation Foundation President Geoff Cousins.

Those polled were also told Queensland Premier Annastacia Palaszczuk made an election commitment that Labor would not spend public funds on Adani's private rail line for their coal mine.

People were then asked if the Queensland government should keep its promise and use its power to veto a $1 billion Commonwealth loan to Adani for the rail line.

The Stop Adani Alliance, which is organising the national rallies, is made up of 31 organisations.

Its membership has doubled since it launched in March, while more than 160 groups have formed in that time. Adani under fire over environmental record 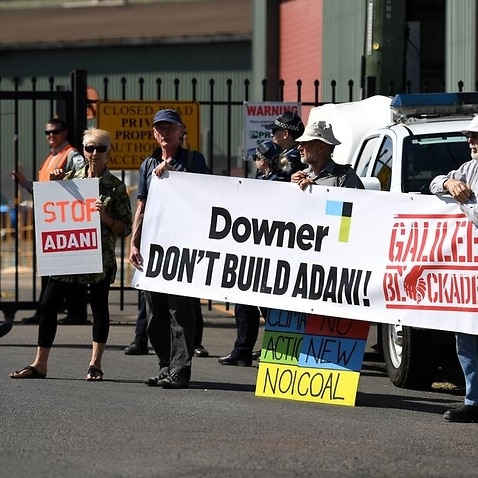