A state funeral has been held for those killed during the Genoa bridge collapse in Italy.

A state funeral service in Italy has commemorated dozens of people killed in Genoa's bridge disaster, as some outraged relatives shunned official ceremonies and rescuers pulled more bodies from the wreckage.

The service, which coincides with a national day of mourning, came as firefighters still searching for five missing people discovered a car with human remains inside.

Local media reported a family of three had been discovered, including a nine-year-old girl, adding to the death toll of 38. A view of the collapsed Morandi highway bridge in Genoa, Italy.
AAP

The populist government has blamed the operator of the viaduct for the collapse and threatened to strip the firm of its contracts.

Thousands of mourners flocked to bid farewell to the victims whose coffins, adorned with flowers and photographs, lined an exhibition hall turned into a makeshift chapel.

"I lost a friend but I came for all the victims," Nunzio Angone told AFP.

Among the coffins was a small white one for the youngest victim, an eight-year-old boy who was killed alongside his parents. 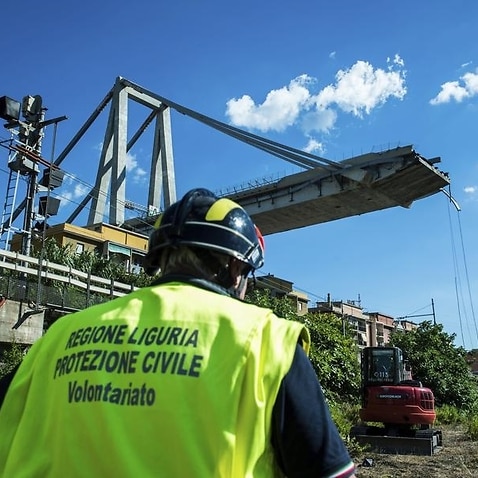 Another two were draped in the Albanian flag featuring a black eagle against a red background.

Applause erupted as firefighters entered the hall ahead of the ceremony, which began at 11:30 am (0930 GMT), according to an AFP reporter.

'Farce of a funeral'

But more than half of the families of the victims refused to take part, some preferring a more intimate funeral, while others announced a boycott.

"It is the state who has provoked this; let them not show their faces, the parade of politicians is shameful," the press cited the mother of one of four young Italians from Naples who died.

Roberto, father of another of the dead from Naples used social media to vent his anger: "My son will not become a number in the catalogue of deaths caused by Italian failures."

"We do not want a farce of a funeral but a ceremony at home."

Archbishop Angelo Bagnasco, who is expected to lead the mass, expressed his respect for those who refused state funerals.

Italian President Sergio Mattarella and Prime Minister Giuseppe Conte are due to preside over the state funeral, which local media say will also be attended by senior staff of infrastructure giant Autostrade per L'Italia, the managing company of the highway.

The government has accused Autostrade of failing to invest in sufficient maintenance and said it would seek to revoke its lucrative contracts.

Interior Minister Matteo Salvini demanded that the company offer up to 500 million euros ($570 million) to help families and local government deal with the aftermath of the disaster.

The Morandi viaduct dates from the 1960s and has been riddled with structural problems for decades, leading to expensive maintenance and severe criticism from engineering experts.

Its collapse prompted fears over ageing infrastructure across the world.

Italy has announced a year-long state of emergency in the region.

Autostrade, which operates and maintains nearly half of Italy's motorways, estimates it will take five months to rebuild the bridge.

It denies scrimping on motorway maintenance, saying it has invested over one billion euros a year in "safety, maintenance and strengthening of the network" since 2012.

Atlantia, the holding company of Autostrade which is 30 percent owned by iconic fashion brand Benetton, has warned that the government would have to refund the value of the contract, which runs until at least 2038.

Conte said Autostrade "had the duty and obligation to assure the maintenance of this viaduct and the security of all those who travelled on it."

Government officials were set to join a police meeting in Genoa to discuss contingency measures for the city, which has been split in two.